Why I love Zak and the Gang! 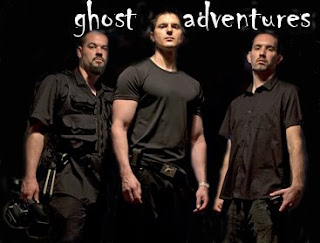 Ya’all might wonder what it is that makes me goofy about “Ghost Adventures.” After all, when they’re in season, I post on the day of their show and insert a music video that I think suits the theme for the show and have a drinking game posted that involves a swig for ever “bro,” “dude,” “man” and every time Aaron’s mouth hinges open in shock and horror. It’s just a delight. But, I’m a serious ghost hunter, right? What is it about this trio that curls my toes?

Watching Zak and the gang is kind of like having an ADD kid do math equations, its damned entertaining, but you’re not sure where he’s going with it!

It’s the dramatics of the whole thing. The Brit’s have their “Most Haunted” with the twitchy chick who shrieks and cries with every sound and her eyes want to pop out of her head as if she overdid the Formosa oolong at tea time. But, we have a bad-ass American version of that—three guys locking themselves in for the night, taunting the four walls like macho conquerors. If believe in evil as an entity or the concept of possession, its crazy insane and if you don’t believe in such concepts, it’s just plain fun! I’m sure the Brit’s watch and think, “those Americans are just so bossy,” and we look at “Most Haunted” and say, “Those Brit’s are such scaredy cats.” It’s all culturally relative.

I think these guys did what any basement full of overgrown boys would do, sit around and shoot the shit. They have a few beers, talk about ghosts, swap stories, then say, “hell, we should get our camera and go look for ghosts!” The next day, sober but afraid to say it was a crazy idea, they go out looking for ghosts in some graveyard or abandoned house. It’s like they’re making up this shit as they go along. I like to see it. It’s really the evolution of a ghost hunting team. You start out on a dare or a whim and then you start experiencing things, then you want answers and it sobers you up.

They could be any three geeks on your block!

I don’t expect huge advancements in ghost hunting from the gang. I want to see some average guys getting all excited in the dark and cowering in long halls and hating to be alone and acting tough and retreating. It’s just plain good fun. It reminds me of “The Ghost and Mr. Chicken” when they nudged Luther to stay in the haunted house alone one night and he had to act all cool and went inside and fell apart.

Ghost hunting often takes itself too seriously. Just listen to Steve pontificate with his little mini lectures about what ghosts are when he’s explaining something to Tango. No one is an authority. You have a camera and some curiosity, you’re a ghost hunter. They are nothing more than people who’ve had experiences, want to have more, and are still baffled in the end. I’m not an advocate of the efficacy of provoking, but hell if I were a ghost and Zak was begging me to bite him, kick him, knee him in the groin… well, you know I couldn’t resist.