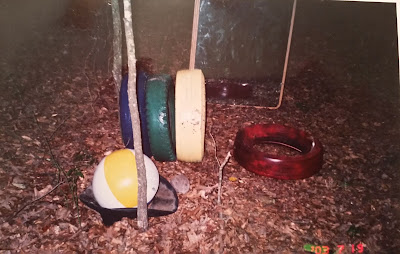 Mirror, tires, tire tube, and beach ball (above) are west of the creek in the "Bigfoot Preserve" area. This entire setup was done by Bigfoot. The half coconut shell was found on the ground next to the tires. The day before, all these were on top of the tires. One tire (red) was also knocked over. 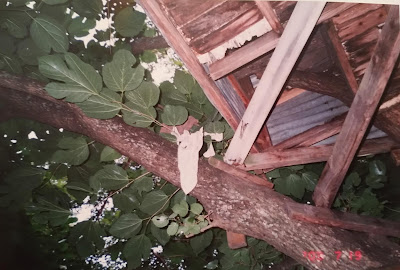 Bigfoot did this (above) as well. West of the creek at the treehouse (property owner built for his daughter). Dusty's gray and brown t-shirt found up in the tree next to the treehouse. 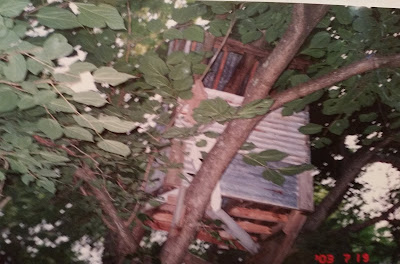 Different angle of the same find (above). 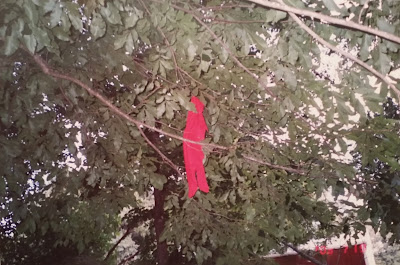 Dusty's Red t-shirt (above) found in a tree approximately 8-9 feet off the ground approximately 50 feet to the south of the treehouse, 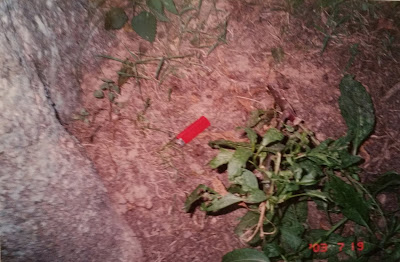 Red lighter of one of the researcher's was found behind the next tree to the south approximately 30-40 feet from the red t-shirt tree. 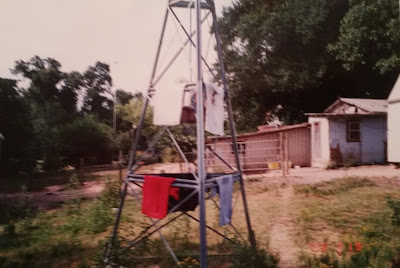 The little windmill on owner's property. Dusty put six t-shirts on the windmill, was missing 2 t-shirts (black and teal green). 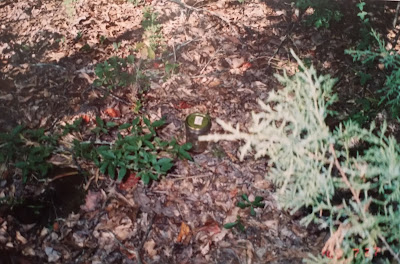 Jam jar was empty and the lid was on it (above), found between the red and white shirts.  This was on the west side of the creek. 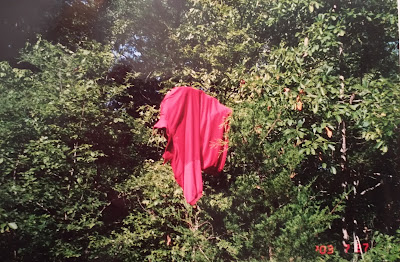 Dusty's red t-shirt was found approximately 8 feet of the ground in a cedar tree west of the creek near a small clearing. 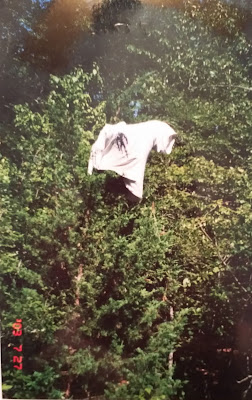 Dusty's white Bigfoot design shirt was moved again about 10 feet off the ground, just south of the red shirt in the tree. The Bigfoot shoved a limb through an arm hole. 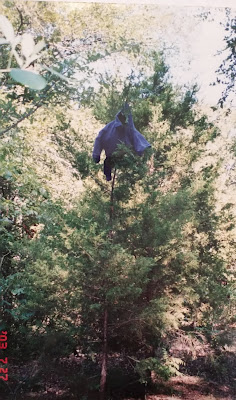 Dusty's navy blue t-shirt found in a cedar (above) approximately 8 feet off the ground in a small clearing east of the other t-shirts. 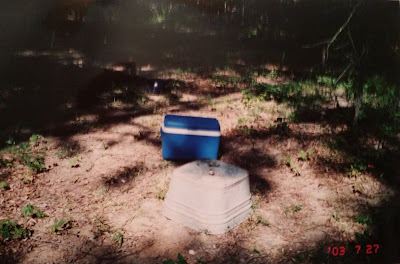 The homeowner's wife's cooler next to the wash tub. The wash tub was covering a footprint. On top of wash tub, a rock was left as a gift or exchange. 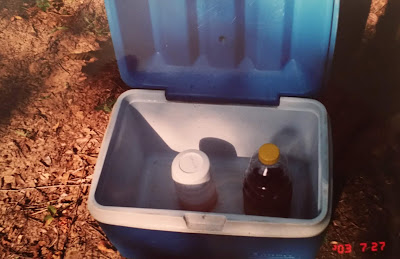 Two tea jars were left in the cooler (above). The one on the left had 1/4 of the tea left in it. The one on the right half the tea is in the jar. And, the lids are back on. (Bigfoot's doing). 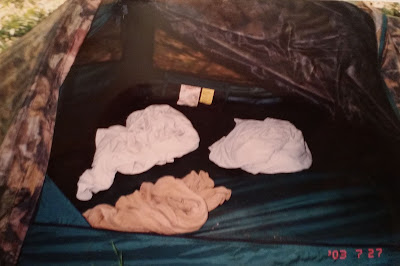 Inside the tent, west of the creek. Dusty's one-man tent with three of his t-shirts inside. The Bigfoot had put them into the tent. They had been hanging on the windmill. (Still missing the black and teal green shirts). 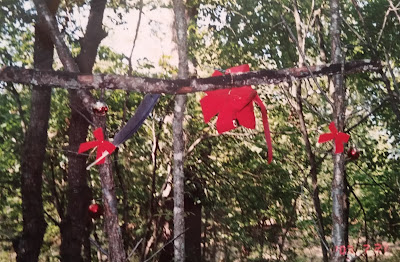 Dusty's small door opening formation with red decorations. Property owner put the feather on the left. In the main bow, the Bigfoot put the harmonica on the main bow. 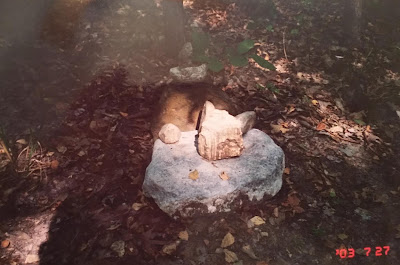 A large rock left on the stone left for the property owner by the Bigfoot. 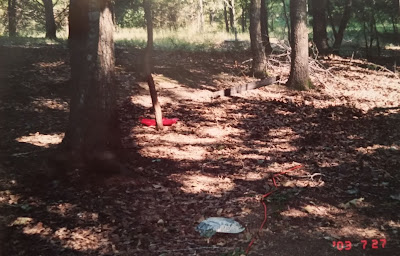 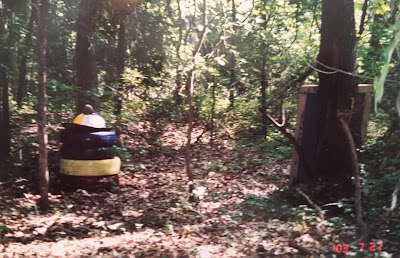 New setup with all items moved from previous locations - the mirror, tires, tire tube, beach ball, coconut half shell. This setup was done by the Bigfoot. The red tire is on the bottom. (The Bigfoot made sure to always place the red tire on the ground). 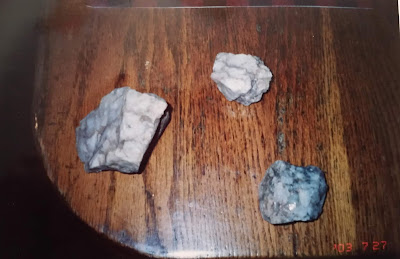 In the property owner's home. These rocks were left for the owner's wife in exchange for tea and sandwiches. These were left in the cooler. 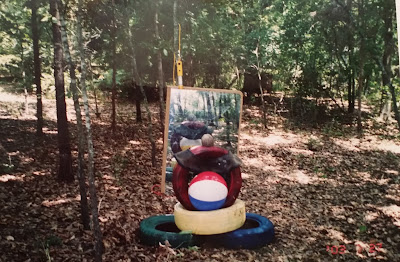 Dusty's setup has been moved. the mirror with tires, chain, beach ball, tube, and half coconut. Under a light above the mirror. Red tire standing. 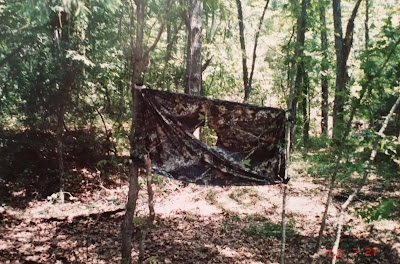 Dusty's setup (above) with the camo poncho, looking north and west of the creek. 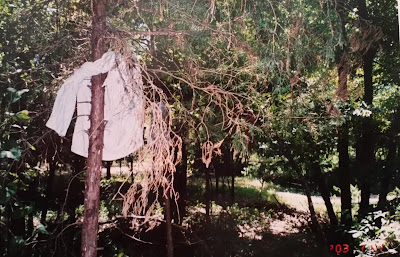 Dusty took t-shirts from the tent and tied them to three separate trees (above) two gray and one brown hung northwest to southeast. 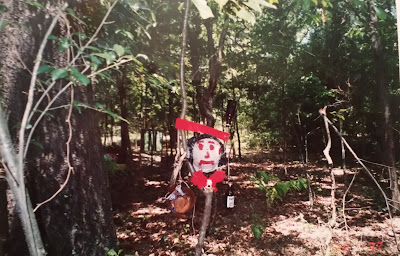 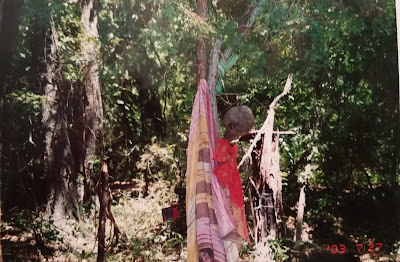 Dusty's setup (above) looking north. A brown limb with towel, ribbon, and the green chair piece (what was left of the chair), and rear view mirror attached. 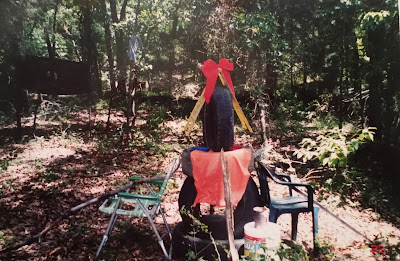 Dusty's new setup (above) pieces from the formation from east side of creek brought to the west side, facing north. 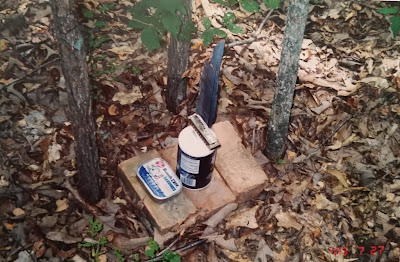 Another setup - gifting. A can of sardines atop three bricks with salt canister and harmonica and feather. That was the door formation (around it). Dusty brought juice for that night later on too which would set atop the other brick. 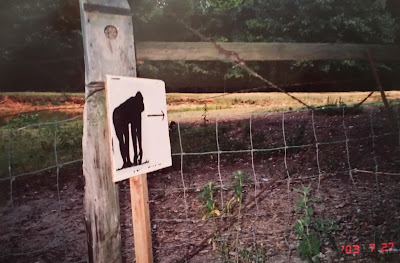 On the property owner's fence line south of the duck pond. This was for directions. They were going to have a get together for some other researchers to know where to go at that person's property. The team took the sign after the get together and put the it near their active area.