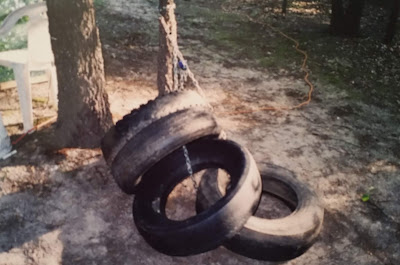 Tires chained to Bodarc tree in the "Bigfoot Preserve" area about 100 yards from the house on the property. You can see the extension cord behind the tires that went out to the camera. During the night, these tires (above) were disturbed and the monkey doll that was on the chair in the background, was gone. 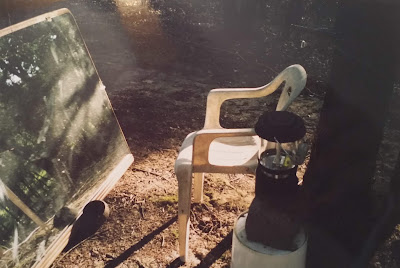 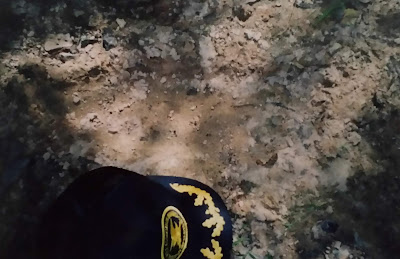 At the creek, south of the bridge, the first of three footprints found (above). 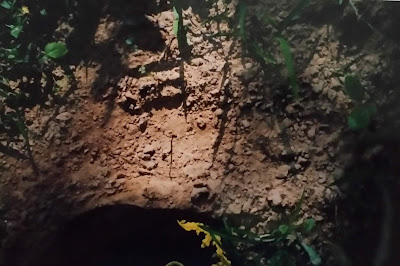 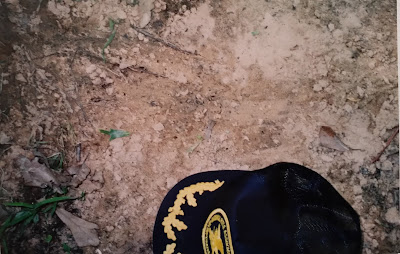 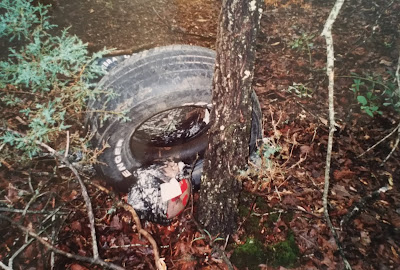 In the southeast area, a formation was knocked down, but it could have been cows. 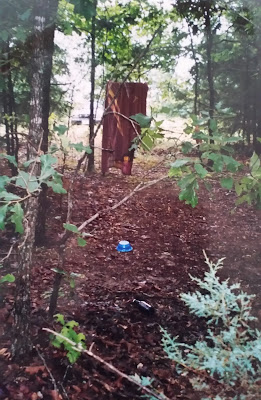 The bowl (above) from on top of the rotating feeder is now on the ground. 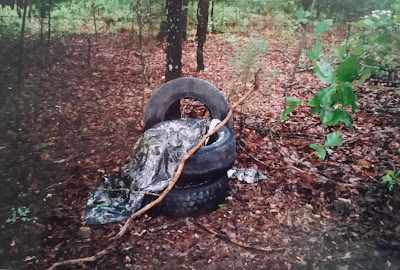 In the southeast area (above), another look at the tire formation. The tire behind the others was standing inside the tires before and is now moved. Inside the tires, Wilson (ball) is inside there with rain poncho dropped over it. 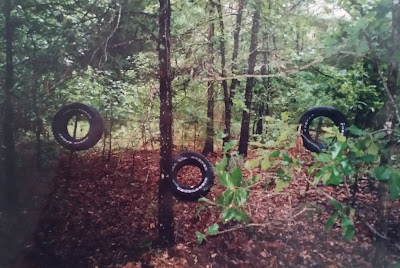 A new formation was put out near the fence and nothing happened to it. Later, the researchers moved the parts to new formations. 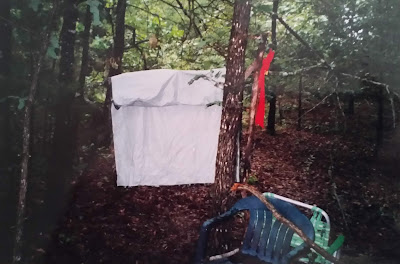 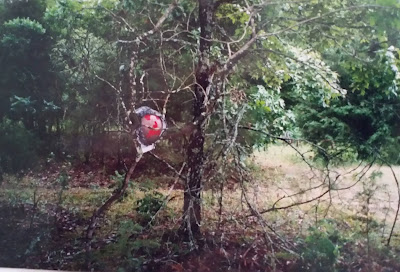 Wilson had been wedged into the tree (above). 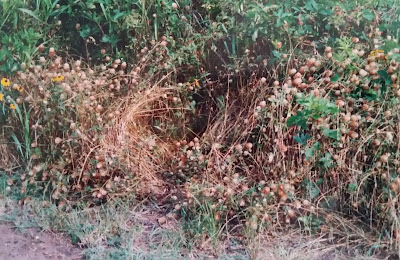 In garden near big barn, a possible bedding area in the berry patch (above). 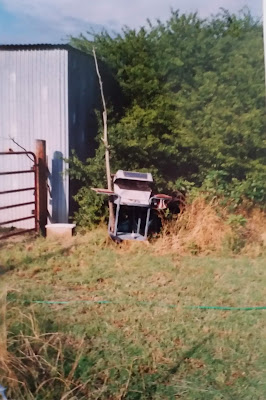 Near the big barn, a grill was set out and peanuts. The grill was moved a few feet. 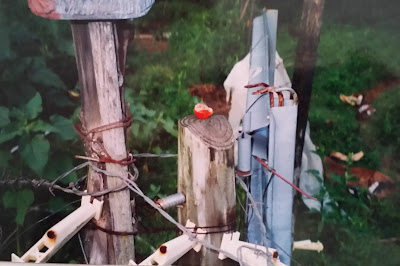 Near the small shed in the small garden, a half eaten tomato was found atop the post (above). 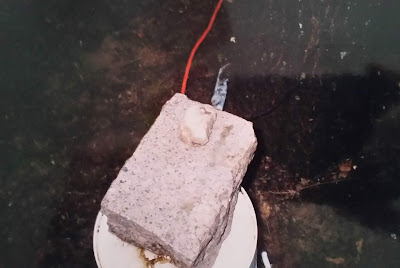 After the mirror, chains and tires were taken, this rock showed up that usually sat atop the bucket that protected the plug outlet. This area of the property was very active. 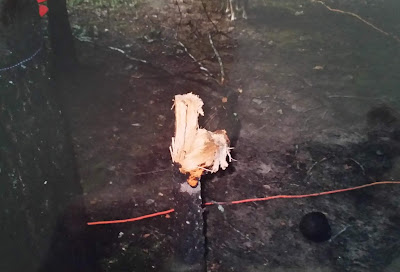 They snapped the Bodark tree that the tires were chained to. One of them body slammed it and then twisted and fought with it for hours until breaking the tree and taking the tires and chains and leaving. 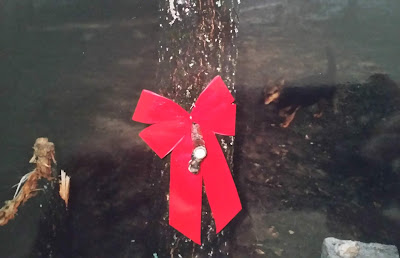 That decoration (above) was on that Bodark tree that got twisted. It is now on the tree beside. Stuck on a rear view mirror holder that was attached to that tree. To right lower – see little rock on big rock. 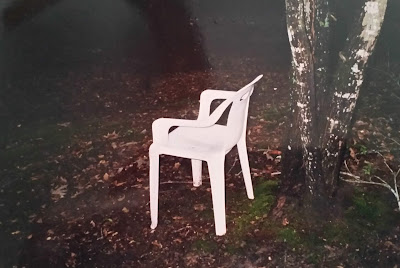 The monkey doll had sat on the chair (above) in front of mirror. It was moved from in front of the mirror to about 20-25 feet away. 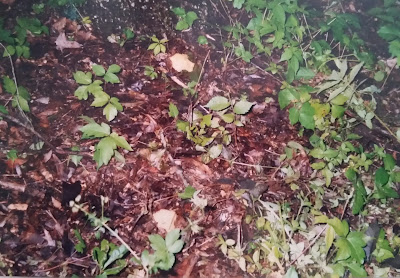 Behind big barn in the garden area (above) - pieces of foam padding from food camcorder bucket found underneath bucket on the ground. Dusty had used foam at the bucket to protect camcorder. In one half he had the camcorder, other half food. 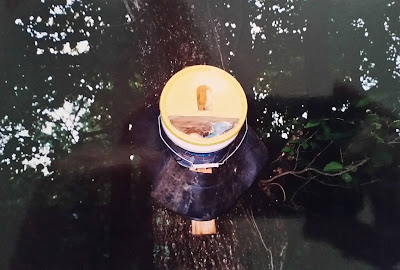 Something (above) tore the padding from it. 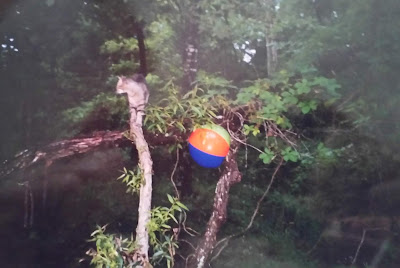 Researchers prepared a new setup with ball near bucket feeder (above). 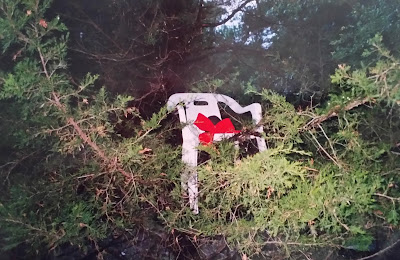 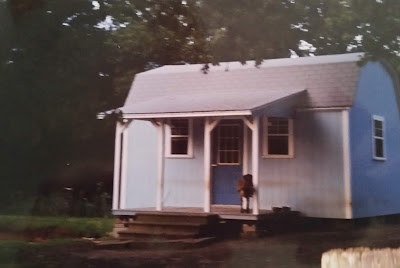 (above) Workshop near duck pond. The researchers kept the VCR, TV and equipment in there. They also had a camera mounted outside on the corner. 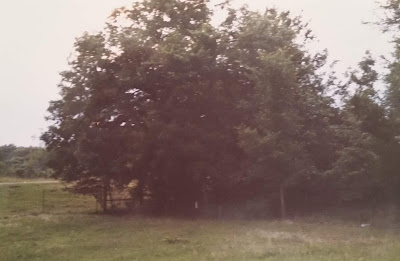 Between the duck pond and the highway (tree). The team captured film of a figure running through there to cedar tree. It scared the ducks to the center of the pond. Whether it was a Bigfoot cannot be confirmed.