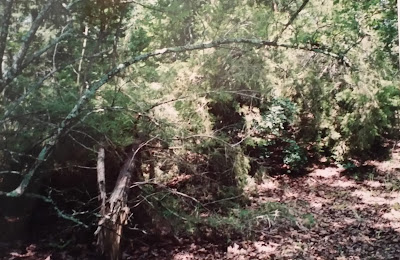 The east side of the creek, some cedar damage was found. 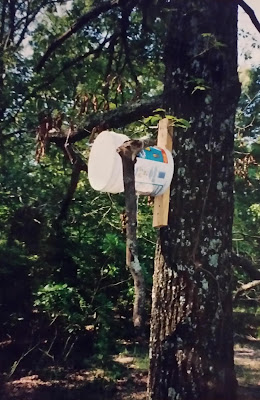 A limb used for string line was found back atop the gifting bucket. 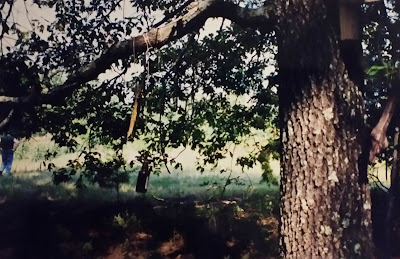 Someone tied a string to the bottle from the limb. You can see this is on the other side of the bucket tree. 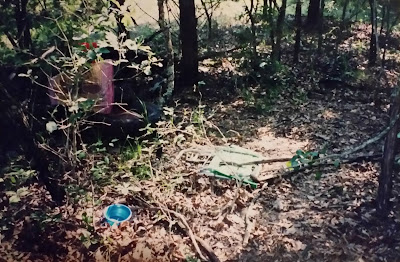 Dusty's setup from June 10th totally messed up. Believed the Bigfoot did this. 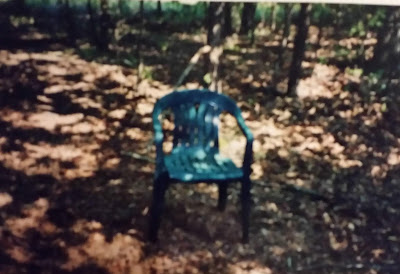 Green chair (above) was moved again to area near the revolving feeder. 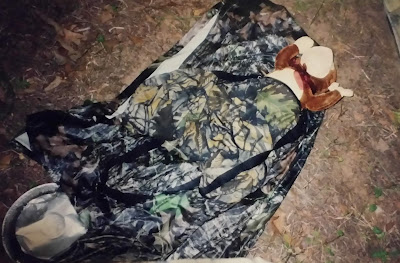 On the west side of the creek, the researchers found camo blind bag, camo poncho, monkey doll, placed inside with tin plate on ground. This was believed to be configured by Bigfoot. 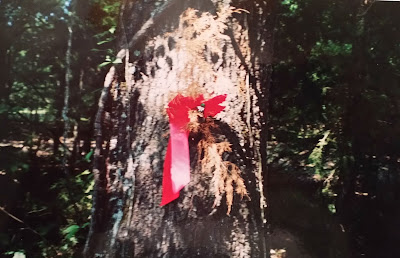 Far west side of creek, a Christmas decoration on a small limb (above) was found jammed into a tree crevice (by the Bigfoot). 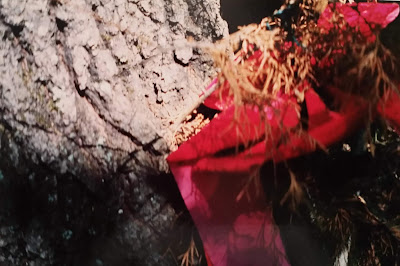 Closer photo (above) of the decoration. 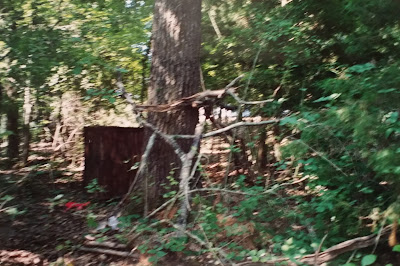 Broken limbs formation (above) thought to be done by Bigfoot. 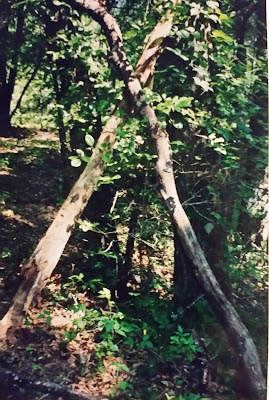 Across from the prior broken limbs formation, the researchers found this huge X formation (above). 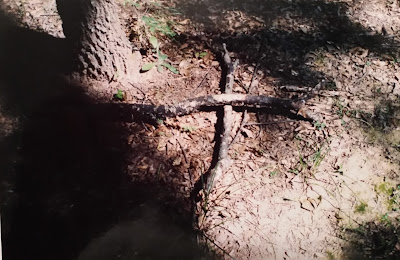 X made of limbs on ground (above) found near a tree out in the clearing.

In relation to property, bottom part of the stick across is toward owners home. North part of cross towards the "dirty acre" area (the abandoned house area). Right side pointing toward tree. The left side is pointing toward wildlife management area. In regard to the "dirty acre," missing items the owner often found over in that area, showing a hidden cache area or hiding place. 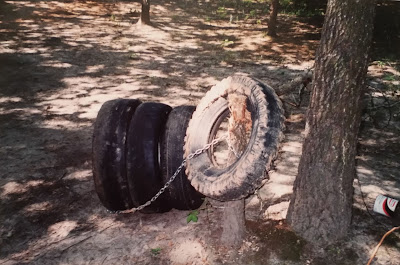 B'au'darc tree (above) had been torn apart to get to tires chained on it. Now, the researchers have found the tires placed back over it. 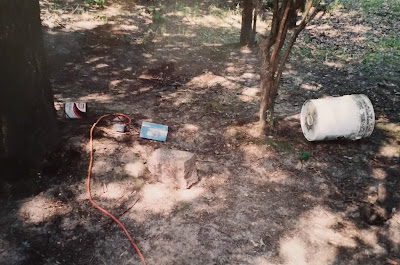 The bucket west of the creek that covered the cord plug with a rock on top (above) was knocked over. It could have been cows. 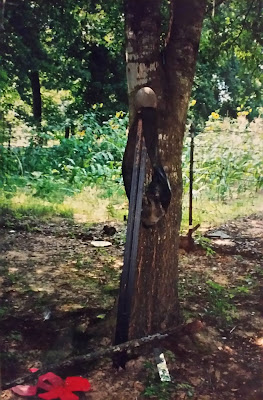 West side of the creek, researchers realized Bigfoot did this. This was just on owner’s side of gate, the garden behind. They found coconut shell, bed frame piece, tire tube, rear view mirror on ground, red Xmas decoration (above). Harmonica in crook of tree. Owner played it and left it out sometimes (sometimes they could hear Bigfoot trying to blow in it) 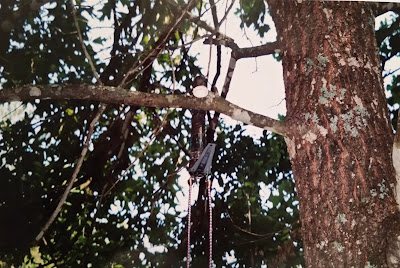 West side of creek. The rear view mirror arrangement (above) left out by the researchers was found in a tree near the tires. 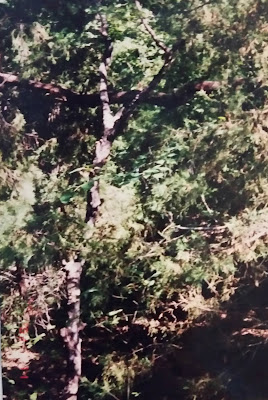 Long limb (above) stood up and then a long limb jammed into limb's vee perpendicular. This was west of the creek and believed to have been done by Bigfoot. 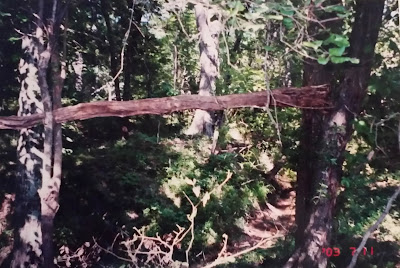 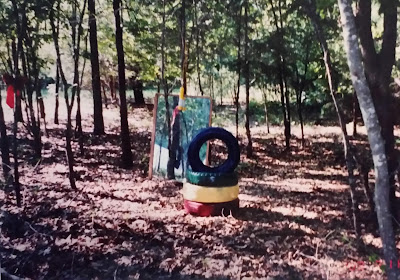 On the west side of the creek, the researchers painted the tires (above) and made a new formation near the mirror. 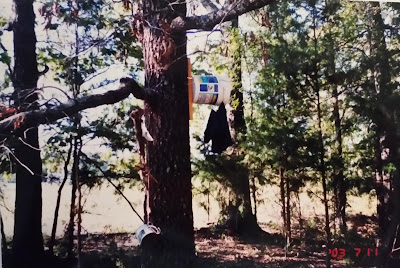 South corner of property, Dusty hanged a sweaty navy blue t-shirt (above) from the food bucket. In the lower part of the photo you can see an old bait can from old string line they used to hang from tractor barn. They had curved the metal inward in spikes and set it up so if the Bigfoot reached in, they would cut a finger and be able to obtain a blood sample. They changed their minds and stopped doing it as they didn’t want to hurt them. 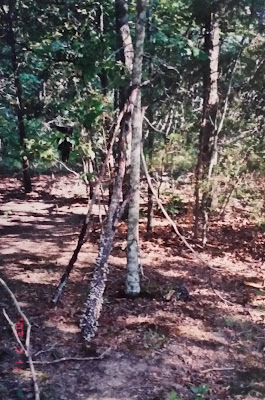 Dusty's formation (above) on trail near revolving feeder. 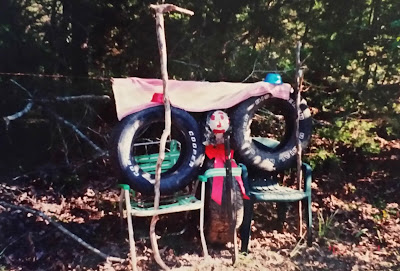 A setup (above) made by the researchers along the fence line.