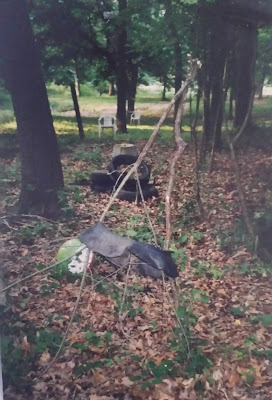 Tire and chain formation which was nailed to the tree has been torn off and placed where seen (above). Beach ball inside tire were both now on the ground. Small tree break with innertube, wash tub, two chairs. (Sometimes the Bigfoot beat on the wash tub or bucket to make sounds.) 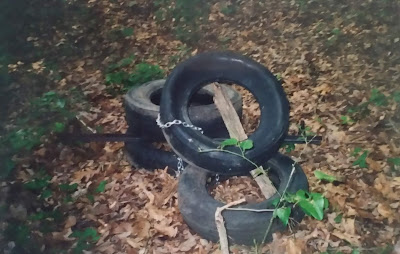 West of the creek, this photo (above) shows a closer look at the tires that were chained to the limb and metal piece. 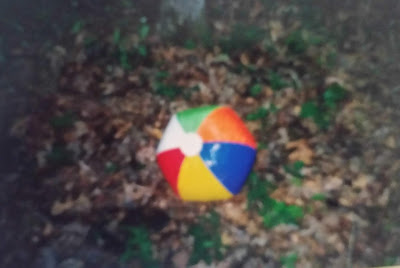 Closer photo of the beach ball (above). 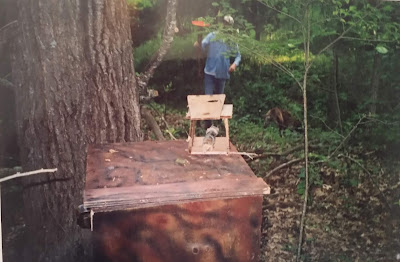 The property owner (above) near stick with frisbee on it used as a feeder. The researchers had placed marbles on it, but they were now gone. The box (foreground) they put the camera in was torn apart. 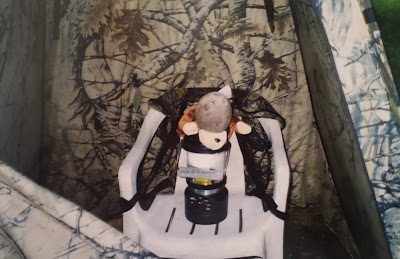 The lantern (above) was removed from the mirror setup. A half coconut shell left on the fence was inside atop the monkey doll. Whoever put it there, had to unzip the tent to get in and do that. 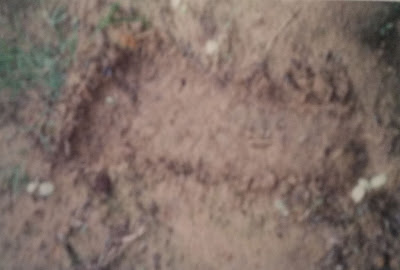 In the garden, a 19-inch right foot print was found behind the barn (above). This was headed in the direction of the berry patch, a place the Bigfoot seemed to love. 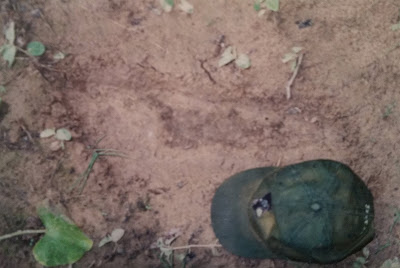 Above is the left print in the garden. 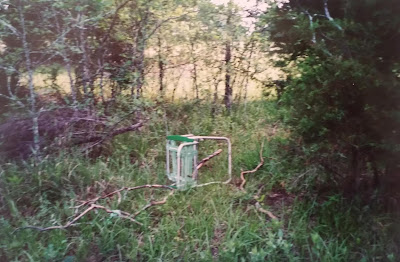 On the north side of the trail near tent (above), the chair was found on its side with limb formation parts. 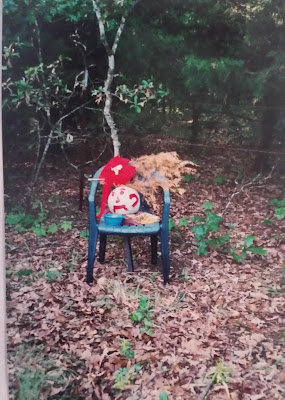 (Above) the chairs had been together. One chair was brought here. The other was far away. The Wilson ball setup had the Wilson head removed and put on this chair now. 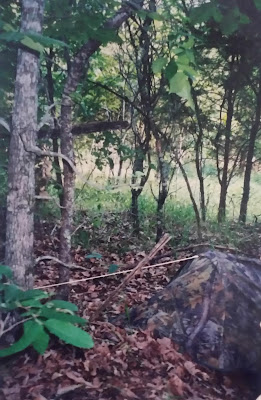 Limb (above) used to be next to the tent is now away. 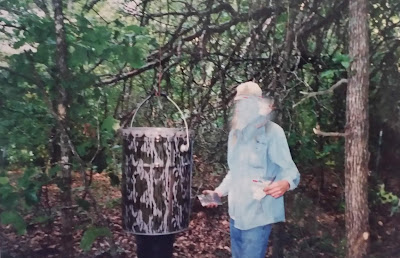 Property owner (above) at the revolving deer feeder. A doll had been there, but it is now missing. The honeybun wrapper was left behind. 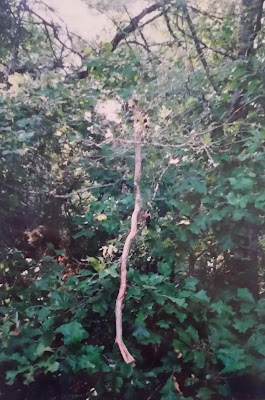 A setup done April 30th (almost a month ago) was found up in a tree (above). 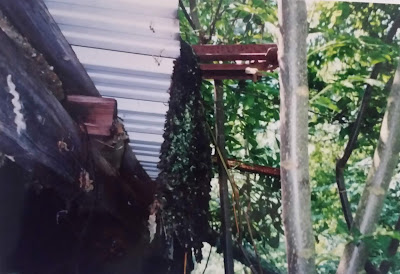 To north of property there was an adjoining property. It had an old small house. Sometimes they found stuff they left out for BF over there, old carpet pieces in there and such. It was an abandoned place. On one of the videos, something is putting a carpet piece over camera lens, back and forth. Carpet piece found draped from edge of roof line.

Do they understand cameras? Let's look at this video MK Davis placed on his YouTube Channel that are examples from the property -

The property west of the creek (above) in the "Bigfoot Preserve" area it appears the BF left a beach ball about 40-50 feet away.

In this same area, it appears a Bigfoot left the inner tube on a tree stump. 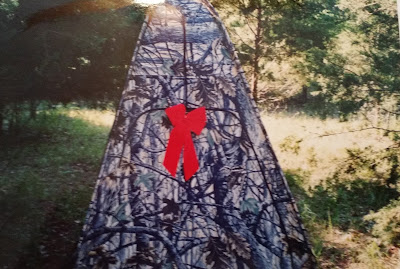 In the same area, it appears the BF put the red Christmas ribbon on the tent and had to stick the tie through the zipper hole and twist. 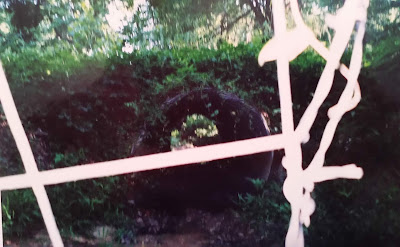 At the north end of the property, the creek runs through a culvert. This culvert runs under the country road to the gravel pit. 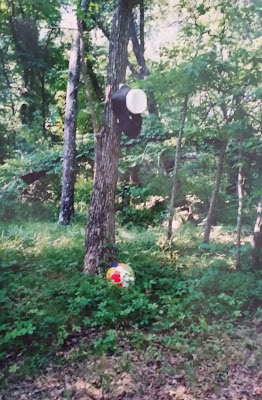 On the west side of the creek (above), a new setup was done involving food container, ball, and inner  tube. 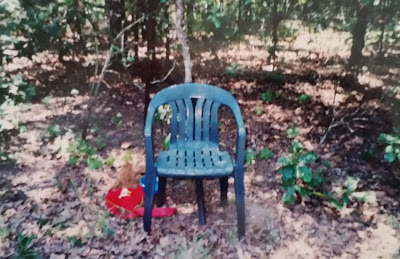 In the southeast area of the property, the researchers found a new setup messed with by the Bigfoot. The team had set up a towel on a chair with the Wilson ball/head on it and red decoration behind Wilson head, with bowl in front of head.

Now, they found Wilson and towel were gone and the red decoration and bowl were near the chair. A doll the team had left out was gone for a few days. It showed up again (above) in the tent in the southeast area in the "Bigfoot Preserve." 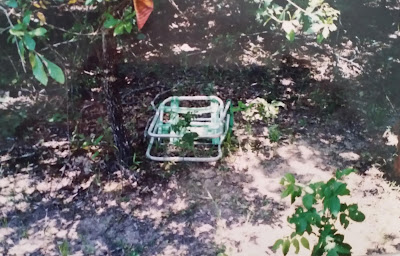 The chair was found near a tree along with the Wilson head and blanket. 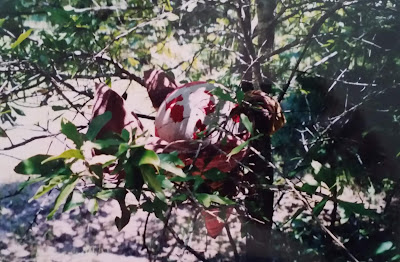 Wilson and towel were found in tree 4 feet off the ground (above). 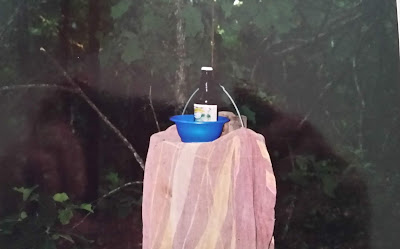 A new setup (above) by researchers involved a towel and a bowl on the rotating feeder and a bottle of "bigfoot ale" (that was later opened and drank).