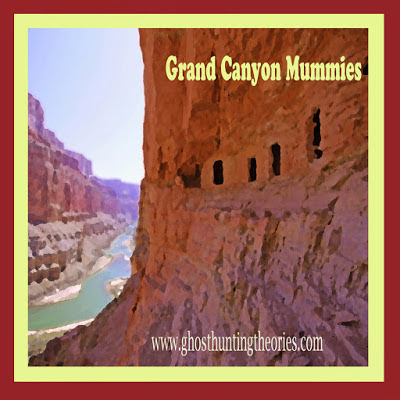 Researcher Dennis Guern and I have worked on this series about the Grand Canyon mummies with the hopes of weeding out the details of the 1909 newspaper article about the find and seeing if any of the components are feasible. In today's installment, we hope to bring to life through a fictionalized narrative, a possible scenario for these people -

Prior installments in this series:

The Clovis culture of the Southwest went missing many thousands of years ago.

Some researchers believe the Clovis people's culture died out due to dying off of megafauna and megaflora. But, at that same time period there were major volcanic eruptions in the Southwest region.

Is it possible that some of their people survived the vanquishing due to the help of another culture of people; a people the Hopi came to refer to as the ant people?

Could the Hopi be the offspring of Clovis culture who learned new techniques and influences from these underground people? Did they adapt to a new world that was grown from the ashes of the megafauna/megaflora epoch?

Interestingly, the reports of the cave find in the Grand Canyon included storage of samples of seeds and a drawing of .

If a flood had precipitated them going into caves, gathering of large animals and seeds would not have occurred. They would have been lacking tools. But, instead, their cave system was filled with idols, precious gems, gold, seed, animals, and many crafted tools from within the walls. This shows that the people had enough time to go underground and escape a calamity above.

A volcanic eruption is an ideal catalyst. In fact, lava flows caused many lakes in the Colorado River from damming it up. This also correlates with the description of steps carved out from the cave to what appeared to be a water line. That raised water line would support the concept of eruptions. The volcanoes in the Flagstaff area would have had great fall out for those who lived in the Grand Canyon Plateaus.

As we will refer to these cave mummies as the "Momia de la Cueva" (cave mummies) in this fictionalized narrative below.

Tirelessly, the tribe members rushed to and from the cave opening around the clock. All five boats were used. The warriors secured the women and children first in the inner sanctum before securing all they owned.

Sashwat was glad his son Nirvav and his wife Talika had survived the ashen air. The women had devised makeshift cloth filters to help aid the men while they added even more reserves to their cave site. Several warriors within the great caverns guarded the precious population within and men of a higher position, like Sashwat, guided the completion of the tasks.

The air was thicker today and the grit was getting into his nose, mouth and lungs, making Sashwat's normal stamina diminished.

It was difficult to not be angry with himself. His senses felt the rumblings of the volcano, knew that something was afoot, but he didn't share. Ignoring one's intuitive was cause for going before the council. Perhaps when everyone was safely secured in their warehouse in the rock face, he would confess.

"Sir, there are three more boats and then we are done."

The youth passed on the information as he raced up the carved steps to their cave.

In all the years of utilizing the caverns as a storage place while they farmed on the plateau above, it never occurred to Sashwat they would need to house their precious families within that dark dry series of caverns. Now, their entire seed catalog was being carried up the stairway with hopes the air would clear and they would plant again.

"You are no less vulnerable than the rest of us, Sashwat." Their chief rested his hand on the mighty warrior's shoulder. "Retreat to the cave. We are ending here."

Sashwat gladly followed their leader up the steps to the cave. Torches lit the cavern and voices bounced off the walls.

"By the way," the chief turned to him, "the neighbor tribe is caught in the open."

Sashwat nodded his understanding. The tribes were not necessarily friendly. They knew of each others presence, but never intruded on each others activities.

The tribe that lived atop the plateau were not miners nor workers of metal. They were hard workers at hunting, gathering, and simple farming, but they had much to learn to be of a level that Sashwat's tribe had achieved long before these "new ones" arrived.

"We cannot have all this abundance without helping our neighbors."

Considering the leader's words, Sashwat searched for the right words. Communication was critical for their people and especially proper words to explain intent.

"I will gather four men and we will seek them out and offer the great cavern for them."

"It is more than that, my friend. We need to teach them how to survive these times. Our people have always maintained the cave for these times of great ash. We have lived on the plateau and down below both. They are not people of darkness. We will set an example for them so they may survive."

"Your intentions are my guide. I will form a committee to move quickly. The ash may fall for many cycles of the moon."

The local tribe, having depleted resources with game impossible to kill and crops buried, were relieved to know there was a safe place from the gods fires.

It took only weeks to offer fish, dried meats, and much seed before the neighbor tribe took advantage of the great winds and clearing of the skies to make a go of their lands above again.

The tribe wished the best for the above-ground people and concentrated on the very real risk of another eruption. Tremors had created fissures in some passages within the cliff city.

This nagged at Sashwat's intuition. The women and children were deep within for protection and guarding their greatest resource. Among other passages, scattered treasures of gems, metal ore and carvings were passed by without a second glance. What were once the basis of their people, metals and gems, were now flotsam and jetsam in the chaos.

The warriors came and went from the cliff to fish and gather more resources and evaluate the air and threat. At any given time, only several men in the hall remained, preparing the dead for their placement and being certain no one raided their sanctuary.

Confidence grew and their village on the plateau was nearly cleared so that personal items could be returned like clothing, trinkets, and cooking tools. Overall, the tribe's mood shifted to upbeat that the time in the caverns would not be indefinite. They had even taken to singing again while they worked moving some of the archived seed back to the village in preparation for women and children being able to return.

Then, one day, when half the men were out to re-settle the village, the ground rumbled.

From within the chief's room, Sashwat's brow furrowed. He awaited word from Bodhi, the go-between, a youth that ventured to the women and children's caverns and back to report needs and conditions.

It had been too long since the young man sprinted off.

When another tremor rattled the sturdy structure, Sashwat considered the delicate arches to the precious room and how they should have taken the time to shore it up.

Instinctively, he stood up at the table and prepared to see for himself when Bodhi rushed into the room.

"The chamber is sealed. The rock fell. They are trapped." He sputtered.

Before Sashwat could respond, the chief rushed the out-of-breath youth.

Bodhi raised a hand. "Yes, but there is a smell coming from the passage. It smells noxious, worse than the air outside. It made me feel sick."

Giving no concern for his own welfare, Sashwat sprinted through the main hall and down the passages toward the Precious Chamber. If his family was in danger, he did not want to live. It was sacrilege to admit such, as his position as a leader of their people made him too valuable to risk.

His heart pounded as he turned the bend deep within. Faced with a length of passage filled with rubble and a gaseous smell that made his eyes water and his lungs seize, Sashwat stumbled back.

Two other desperate warriors rushed forward and stumbled back as well. They turned and ran from the odor, gasping for air, falling to their knees.

"We must get back to the hall and gather our men." Sashwat choked as he led the way back to the main hall.

"Do you still smell it?" One man asked as they rounded the corner into the great hall.

"I thought it was simply in my nose." Sashwat commented, but the odor increased.

"What should we do?" Bodhi begged the chief.

The men gathered around for guidance from their leader when two men began to sway and collapsed into the carved seats along the wall.

Soon, Sashwat's vision clouded and he fell to his knees meeting the hard floor with a thud. His head hit the ground, his mouth foamed, his spasming lungs expelling the last breath he would contain....

Dennis Guern and I hope that y'all enjoyed this rendition of a possible scenario for the cave mummy find. Momia de la Cueva is what we have come to refer to this mysterious tribe - the "cave mummies." Expect us to bring more information on the Grand Canyon mummies as we pursue this subject even deeper over time.