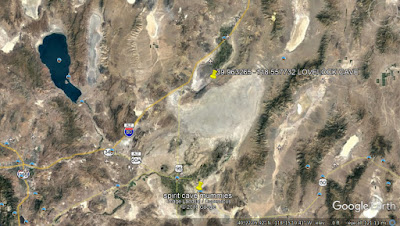 On a visit to Lovelock Cave, a group of researchers discovered some interesting evidence of the past lying around.  If you want to keep up on future installments of this series look for the tab at the top of the blog that says "Lovelock Cave Series."

This post is co-written by researcher Dennis Guern who had the piece of mind to document while there.


One item was a very very old poop. Yes, you heard right, a poop! It had loads of chewed up tule within it. It was large, quite large even for a person to have expelled, but given the desert area, no large creature within that cave could have poo'd this. (pictures below - they took it outside to photograph in the light) 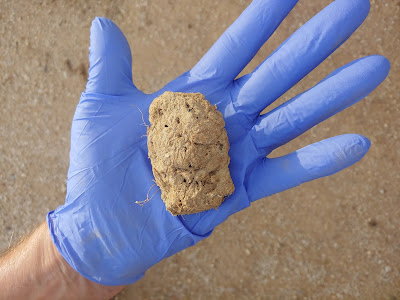 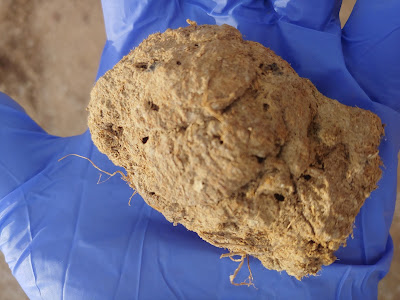 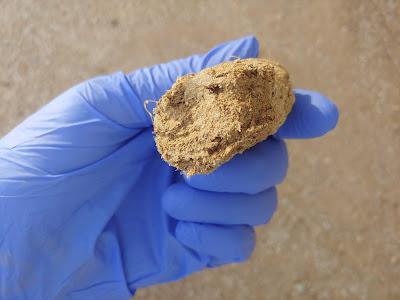 Tule is a plant that grows in marshes. It is fairly strong and one is able to fashion baskets and such out of it, and the root has been eaten by native people.

The Paiutes spoke of the Si-Te-Cah tribe of giant cannibals who were called Si-Te-Cah because they were "tule eaters." The Si-Te-Cah were said to have ridden around the lake (Lake Lahontan - ancient Pleistocene lake) on boats made of reeds.  It was said by Paiute legend that the giants could not cooperate and stop their cannibalistic ways, so they were trapped inside of Lovelock Cave, the entrance filled with brush and burned, warriors atop of the cave to shoot arrows at any that tried to escape. 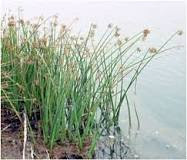 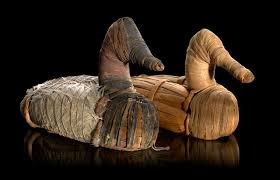 These oldest duck decoys (above) ever found were inside Lovelock Cave. On display at the Smithsonian, these were elaborately made of tule rushes and feathers and supposedly dated 400 BC to 100 AD.  What water was there to support a duck and reed-focused culture? 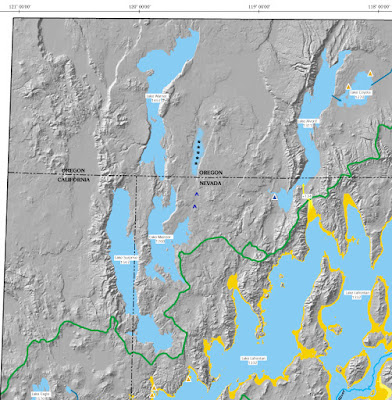 In the Pleistocene Era, there was a lake there at the cave called Lake Lahontan. It was over 8000 square miles. The lake reached maximum depth at around 13,500 BP (before present). The lake had largely disappeared in its extended form by about 9,000 years ago. Today, a reservoir in Fallon, Nevada was named Lahontan Dam and its construction was 1911. 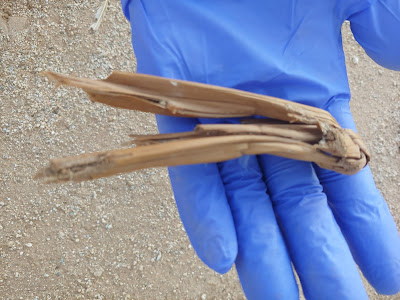 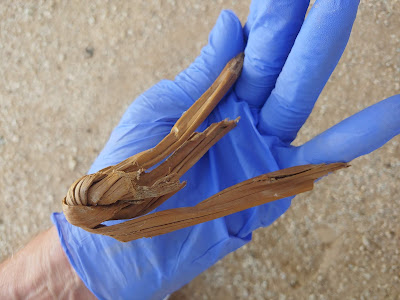 This twisted and shaped tule (above) is an interesting find. Yes, there were duck decoys twisted out of tule, but also sandals in the area. Spirit Cave nearby in Nevada was the site of some mummy finds. They only refer to one of the mummies in the ones found and call him "Spirit Man Mummy" with mass spectrometry showing him to be from 10,600 BP (before present). This use of tule, reeds and duck decoys would make sense in a lake area, but according to the Smithsonian, the duck decoys were from 400 BC to 100 AD in a place where the lake receded 9000 years ago.... 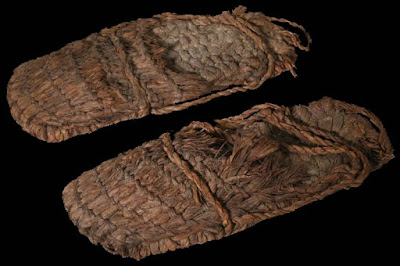 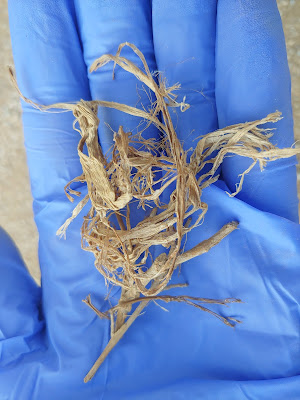 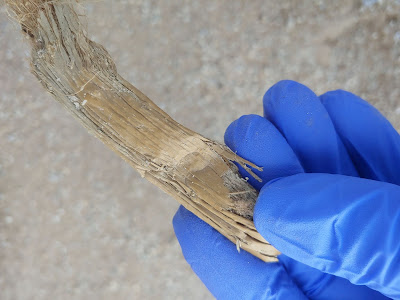 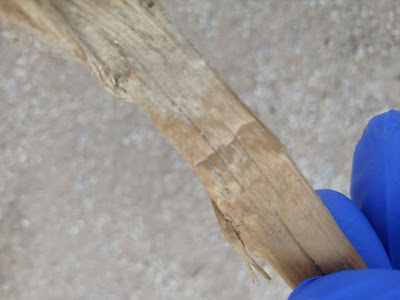 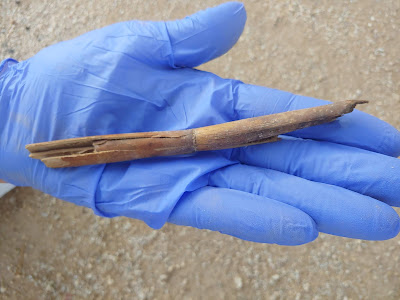 A reed with burned tip! 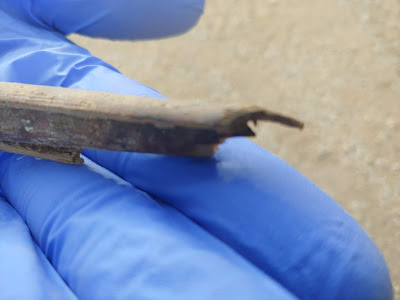 This conglomerate is so ancient, it is comprised of mud and other items in a "puddle" that sort of dried up together and managed to turn to stone over time. Inside were found lots of tule fibers. 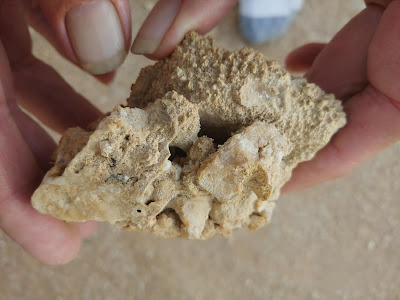 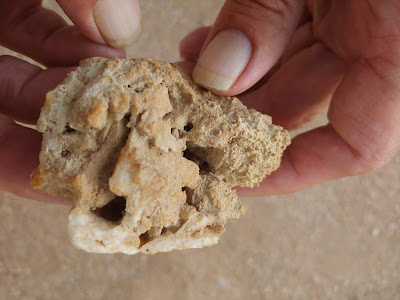 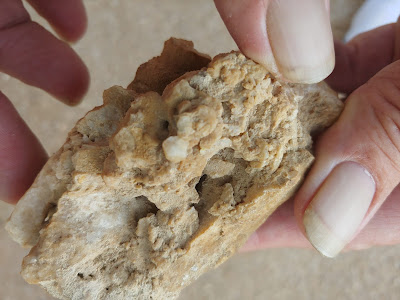 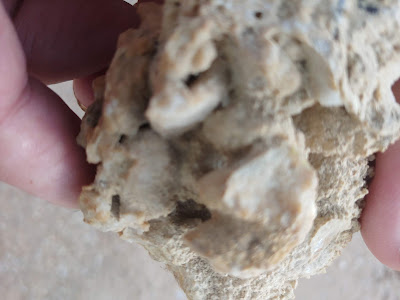 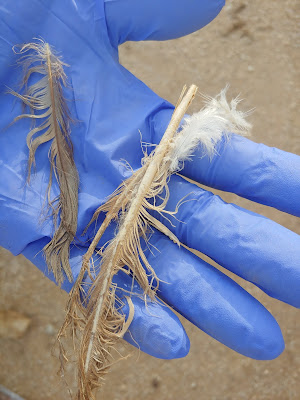 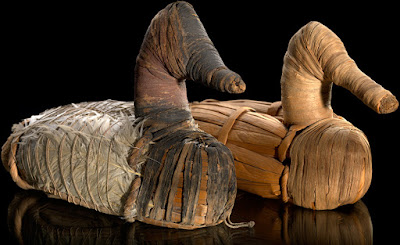 Check out the feathers on the decoy on the left - look familiar??? 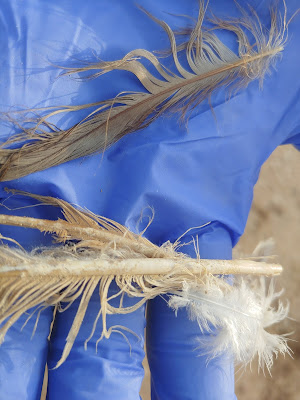 What happened to the finds in Lovelock Cave? Scattered to the winds by the irresponsible research of the 1911 time frame, cobbled away by the Smithsonian, coveted by locals with curiosity for weird "Indian stuff."

But the cave itself? A raised platform was placed inside for visitors to walk upon. And the cave shows evidence of having been blasted down to a much smaller size than the earlier reported size. Without regard for a real archaeological survey of the cave in modern times, all that we know of the cave is what was reported, what was squirreled away by the Smithsonian and apparently traces still around.

In 2013, Don Monroe and MK Davis discovered a giant handprint within the cave that measured about 18". When it was reported to the public, an entity of unknown credentials went into the cave and obliterated the surface of the rock. 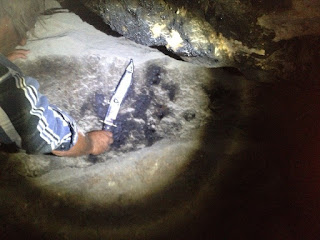 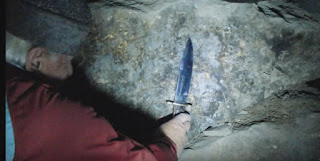 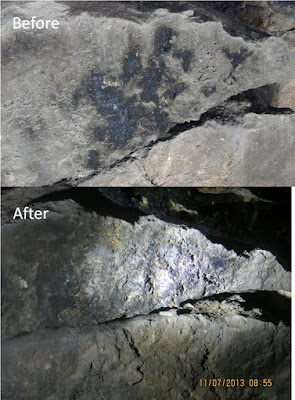 The handprint appeared to be very much made of the same black tarry substance found on the cave ceiling which appeared to be rendered body fat and ash.

Are there secrets about how long people have lived in America and what kinds of people lived here? Oh yes, very much so. I hope in the near future to begin to explore some of the reasons for the government, academia, and possibly even religions (the powerful trinity of information for humanity), to hide our truths.