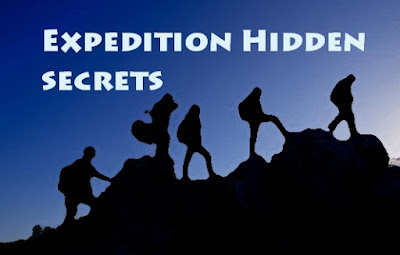 This special posting is the account by researcher Dennis Guern of an expedition recently in Lovelock Cave in Nevada. The team consisted of Don Monroe, MK Davis, Eric Smith, and Dennis.

Lovelock Cave has garnered much attention for the legend by the Paiute Tribe of red-haired giants in ancient times that their ancestors had to drive into a cave and burn to death for their wicked ways.

For more information on Lovelock Cave and the discrepancies in scientific records, please read this article I wrote recently (the first in the series on Lovelock Cave) - LINK. 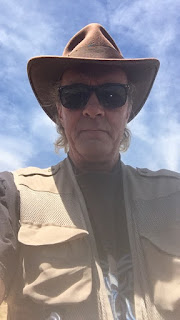 Recently, I took part in an intellectual expedition of Lovelock Cave in Nevada with Don Monroe, MK Davis, and Eric Smith. 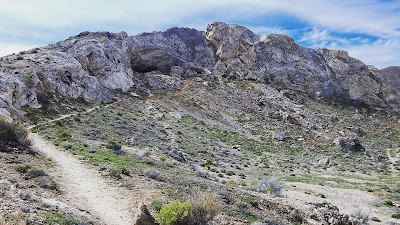 After a lengthy desert drive in 100+ degree weather with glaring sunlight, we pulled up to the dry basin below the cave.  I stared up at the opening, pondering how a cave in the middle of a giant desert could hold significant secrets. 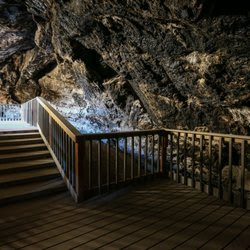 Walking up in the oppressive heat, my focus was on the rattlesnakes that might be between me and the opening. My first thought when I approached the cave, I felt despair, agony, total loss, sadness. Then, as I entered it, my eyes caught the blackened ceiling and I realized something bad happened in that cave. This reality made the past “legends” sink in. A grouping of giant people in a cave, the opening filled with sage and debris and burning out of control; rendering their body fat in the soot on the ceiling for all time. This imagery passed through my mind and added to the weighted burden of despair.

I was surprised to find how clinically picked over the cave appeared. There was a wooden stand for the public to walk on, so as not to disturb the cave floor. Why? A sign told of the Paiute presence in the cave, without mention of the Paiute’s legend of red-haired giants. This sanitization was highly suspect given the story the ceiling told.

Don Monroe pointed out the area where he and MK Davis found a giant 18-inch handprint six years earlier, made of the black tarry substance found on the ceiling. After its reveal to the public, it had been cleaned off completely by some high-powered water tool, no doubt. The left side of the cave had been dynamited and collapsed to reduce the size which was again, really suspect. 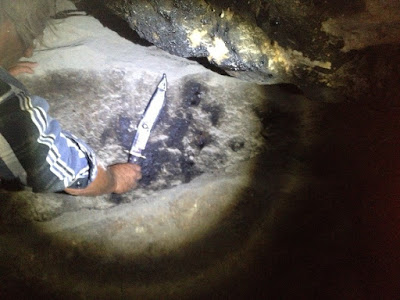 I spent some time walking around, imagining the vision of the past coming to life in the space. I stared out over the desert floor outside and envisioned it filled with water over 10,000 years ago when it was referred to as Lake Lahontan. It was an immense late ice age lake of over 8000 square miles. All of the artifacts showcased in various museums that came from the cave were all based around a duck-hunting culture. Ducks in this desert? The closest water for 9000 years has been two lakes, the remnants of Lahontan, Pyramid Lake and Walker Lake, both over 60 miles away. A duck culture here within the last 9000 years? Again, highly suspect.

MK Davis made a decision to examine the cave at night with thermal imaging to practice with this tool in a cave environment. We researchers joined him.

That evening, I walked about 4-feet in when out of the corner of my eye, I saw a white golden light. It moved quickly as I sighted it. It was moving to the right and deeper into the cave. My feet were making quick in the darkness. My gut was driving me toward something. I didn’t understand why I was being drawn, but I was determined to find the “sweet spot.”

This golden white light guided me to that location.

Don Monroe flashed a light at me to help my determined path.

I stopped, feeling as if there was something under my feet. It was a familial feeling, a good feeling, as if I had recognized something someone wanted me to know.

When Don came up to me, he asked, “what was that?”

“You saw it too?” I asked. “I saw a golden white light with a trail that moved quickly.”

Don frowned. “It seemed like a square to me, but it went so fast.”

Admittedly, I felt some relief that Don had seen it too. I wasn’t on a fool’s journey, I was being driven toward some truth.

*This is the second in a series about Lovelock Cave. Installment #1 LINK. Researcher James Carroll is adding to the mix with his expertise to examine evidence and hypothesize on the Lovelock Cave timeline.