Hiding in the Forest: Bigfoot

It's interesting to me how people can say, "there is no Bigfoot. End of discussion," and yet these are people who read Harry Potter books and enjoy the subject matter knowing it's fiction. If they believe Bigfoot is fiction, why does it offend them so much to talk about this "mythical creature?"
There are few subjects more polarizing than Bigfoot.
Having researched Bigfoot in great detail for a few dozen years, I feel as if I can impart some realizations about these hidden folk.
One thing to keep in mind is that you won't likely see one. It's rare and unusual circumstances and part of it may be due to our electromagnetic fields and their ability to discern not only that someone is focused on them, but if they are human or individual animals. In fact, such technology was recently showcased on a Bigfoot show. By utilizing the scanner, one could find out if a human or a racoon, dog, or whatever was in the forest by looking at their electromagnetic field. Humans are said to be able to read such fields, along with a few other talented critters, being able to sense changes in the earth.
Your best bet is a technique I worked on with Fred Kanney (researcher). When you feel very much you are being watched, stop. Take your camcorder (better quality than a cell) and slowly film what's in front of you, very slowly moving 180 degrees, zooming in and out as you do so. Stop at 180 degrees, back to where you began and fiddle with the camera a bit to look busy, then very slowly backtrack that same 180 degrees, zooming in and out. When you get home, you will find that while you were turned away, something either peeked out from behind the tree, or hid behind it, seeing differences between the first sweep and the second.
In this case below (Freddie Kanney "On the Hill" video), Fred caught this auburn giant hiding behind the tree as they do, figuring you don't see them if they don't move. And it could have worked except the darned wind lifted up his hair (you can see the tuft reaching for the sky). 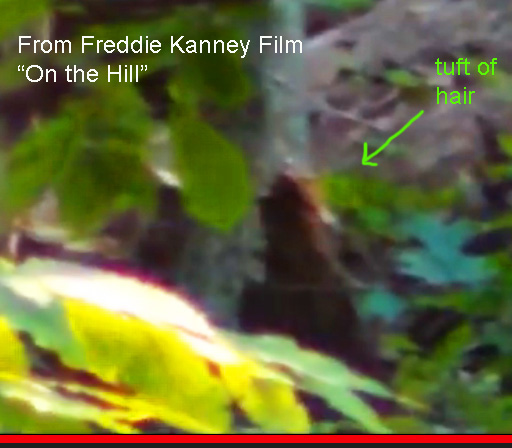 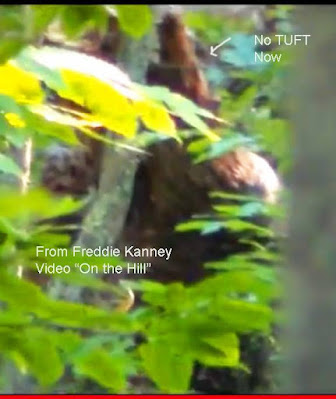 I have written prolific amounts about Bigfoot on this blog (can use the search bar), but some of the posts have been uploaded to Academia.org. Here's some topics you might enjoy to further learn about them:
Footprint length versus height
Possible evolution of Bigfoot
The important secret aspects of the hair
Sasquatch language
Sasquatch locomotion
If you plan to seek them out - here's your tool - 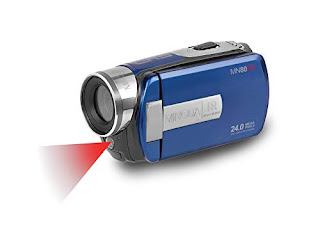