UFO Crashes in the US 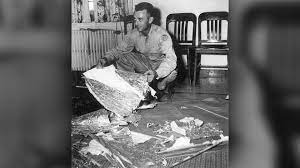 It's interesting to note how many reported UFO crashes there have been in the United States over the the past century or so, given that the technology to visit here should be pretty much with good navigation and equipment.

If even one of these can be proven to have occurred, a new discussion about human history, our origins, and even physics need to be discussed. 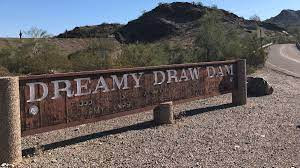 In 1947, there were two crashes reported in Arizona, one in Dreamy Draw, a desert park area in Paradise Valley, and another miles away in Cave Creek, Arizona.

To this day, the legends say a 36-foot UFO is buried under the park. In fact, it was believed that the Dreamy Draw Dam was built to coverup the sizeable UFO, as there was no reason to put a dam into a desert park.

It was decades later, however, when the dam was built and with monsoon rains that hit the hard-baked ground and sit atop of it, it was there to protect the neighbors from flooding.

The legend said that they pulled two bodies from the wreckage and kept them on ice until the military could retrieve them.

LINK:  According to legend -- and a Texas historical marker -- early in the morning on April 17, 1897, something strange happened in the small town of Aurora, about 30 miles northwest of Fort Worth. A cigar-shaped airship was seen falling from the sky when it crashed through a windmill and exploded. The airship, it is said, was not of this world. The pilot – from Mars, people thought at the time – was allegedly buried with Christian rites at the nearby Aurora Cemetery.

This supposed crash was really intriguing as it was the late 1800s, not a time we  think of as particularly spacecraft-minded. It has created a lot of hoopla and people have been known to sneak into the cemetery looking for the alien's grave and upsetting locals for descration. It seems that a simple sweep with ground-penetrating radar would answer many questions. 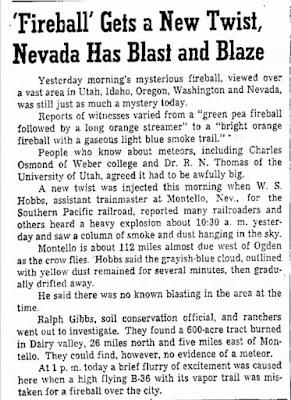 LINK:  The event occurred during the winter of 1952 during the night shift at the Robinson Copper Mine formally owned by Kennecott. Mine workers and other witnesses say that a silver-metallic craft crashed into a snow bank on the edge of the mine property. Local sheriff and the U.S. military arrived on the scene and cordoned off the area telling the locals that a small plane had crashed and that they needed to go home and not interfere with the clean-up efforts. Once the debris was cleared, a convoy of military trucks drove out of the back entrance to the mine and took the wreckage to Hill Air Force Base in Ogden, Utah to be shipped off elsewhere. 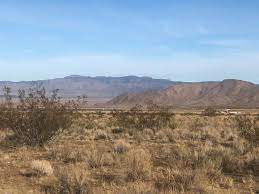 In 1953, the government set off a series of massive explosions in Nevada. At the same time, just over the border in Arizona, people reported seeing eight saucer-shaped flying discs having what looked like a dogfight in the air overhead.

Apparently, according to the local accounts, one of the vehicles crashed into the desert in Kingman, Arizona.

One military person interviewed at the time said that he and another were dispatched to retrieve an "experimental" craft from the desert.

Some believe the nuclear testing in Nevada might have affected the vehicles' manuverability. Perhaps they weren't having a dogfight, so much as trying to stay in the air.

It was said that the unmarred craft was carted off by the military.

It's rare that a "legend" takes on so much unending following for many decades, but the infamous Roswell Crash is perhaps the most well-known in UFO annals.

In July 1947, a supposed UFO crashed near a ranch in Roswell, NM. The military was sent out to investigate and reportedly carted off the craft and some bodies. Such a story might have been dismissed, but before the military could explain it, it hit the newspapers as a saucer crash. Soon, the military came in, posed their fellows with some debris of a weather balloon and basically said, "nothing to see here."

The one thing they couldn't hide were the witnesses who reported details of the debris, the bodies, and where the military carted it off.

However these craft arrived in our skies, it would appear that the possibility of crash should be rather negated by the fact that they traveled from some unknown source and utilized a method of staying afloat with no evidence of engines or propulsion with traditional fuel.

Today, there have been official releases of video of some flying craft captured on video by the military that admittedly show something even they don't understand. Coming on the heels of that an official reported we are in possession of metals, parts from a craft (so at least one of these crashes occurred).

This June when they are to release more redacted top secret documents on UFOs, perhaps more long-held governmental knowledge will be shared.

LINK: The Pentagon has reportedly recovered metal alloys from unidentified flying objects that scientists "do not recognise”.

Well, if the government admits to some metal alloys of curious origins and flying vehicles making maneuvers we can't do, then I think we can all agree - we've had a crash at some point in our history.