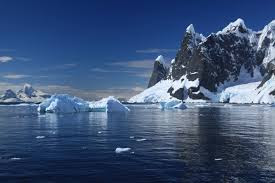 Most of us look at the Continent of Antarctica and shake our heads. Why would anyone research down there? It would seem that just toting a bunch of equipment and people down there would be a fight against nature. But, there are plenty of reasons to go to one of Earth's poles to study including the lack of human habitation.

One experiment in the South Pole showed some highly intriguing results and the implications are mind-blowing.

LINK:   IN THE Antarctic, things happen at a glacial pace. Just ask Peter Gorham. For a month at a time, he and his colleagues would watch a giant balloon carrying a collection of antennas float high above the ice, scanning over a million square kilometres of the frozen landscape for evidence of high-energy particles arriving from space.

When the experiment returned to the ground after its first flight, it had nothing to show for itself, bar the odd flash of background noise. It was the same story after the second flight more than a year later.

While the balloon was in the sky for the third time, the researchers decided to go over the past data again, particularly those signals dismissed as noise. It was lucky they did. Examined more carefully, one signal seemed to be the signature of a high-energy particle. But it wasn’t what they were looking for. Moreover, it seemed impossible. Rather than bearing down from above, this particle was exploding out of the ground.

This fantastic interview (below) by Linda Moulton Howe (the very best in the field of otherworldy possibilities) was with an officer who flew over what appeared to be a strange opening in Antarctica and a mysterious team of researchers.