Lovelock Cave Series: The Case For the Red-Haired Giants 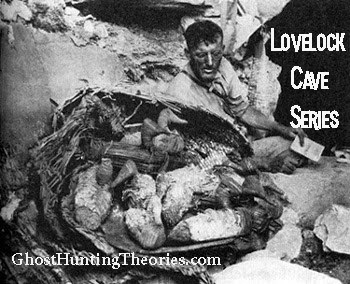 For Dennis Guern, MK Davis, Don Monroe and I the case for the red-haired giants is an important study.

LINK:  (John T. Reid's Case for the Red-Haired Giants - a mining engineer who was befriended by the local Paiutes) A long time ago an indian [sic] tribe came into this country from the southward, this indian tribe was redheaded and they were very tall men, the Piutes fought them on the south and west side of the lake that the intruders crossed over the lake and into the cave, by the use of tule boats they were able to cross the lake easily. The Piutes followed, and when they found that the intruders who Natchez called" Umatilla's" [sic] but other Piutes refer to as the Pitt River or Modoc Indians, had taken refuge in the cave , then the Piutes gathered in council and decided that they would gather all of the sagebrush that they could get hold of that lay to the east of and above the cave and after placing this on 1 .. T Reid's Case for the Redheaded Giants the bluff above and setting it afire that they would continue to throw over lighted brush into the face of the cave until all within had perished from suffocation all the while having men so posted that any of the people within the cave trying to escape could be killed with well directed arrows. After a siege lasting several days, Natches [sic] relates that all of the intruders were killed, but other stories go on to state that the intruders were driven to the northwestward. I can only reconcile this lack of harmony in the different stories with the probable fact that where the battles took place to the southward of Humboldt Lake, it is more than probable that the intruders had their force divided into two groups', one of which went on the east side of the lake while the other went on the west side of the lake .... (MS August 8,1924, "Notes for Mr. Harrington"). 155 Sarah Winnemucca Hopkins's book, Life Among the Piutes, Their Wrongs and Claims, had been published only three years previously, and in it she relates substantially the same story as her brother Natchez had told the impressionable young man that night at the mouth of Indian Cave (1883, pp. 73 -75).

LINK: According to Paiute oral history, the Si-Te-Cah, Saiduka or Sai'i are a legendary tribe whose mummified remains were allegedly discovered under four feet of guano by guano miners in what is now known as Lovelock Cave in Lovelock, Nevada, United States. Although the cave had been mined since 1911, miners did not notify authorities until 1912. The miners destroyed many of the artifacts, but archaeologists were still able to retrieve 10,000 Paiute artifacts from the cave. Items included tule duck decoys, sandals, and baskets, several dating back over 2000 years.

"Si-Te-Cah" literally means "tule-eaters" in the language of the Paiute Indians. Tule is a fibrous water plant. In order to escape harassment from the Paiutes, the Si-Te-Cahs were said to have lived on rafts made of tule on the lake.

The Paiute tradition asserts that the Si-Te-Cah people practiced cannibalism, and this may have had some basis in fact. During the 1924 excavation of the cave, a series of three human bones were found near the surface towards the mouth of the cave. "These had been split to extract the marrow, as animal bones were split, and probably indicate cannibalism during a famine"

LINK:  Miners, realizing the value of guano as fertilizer, started hauling it out in 1911. They promptly turned up bones, baskets, weapons, tools, duck decoys, various other artifacts and what they described as a 6-foot-6 mummy. James H. Hart, one of the miners, wrote that the mummy, found in the north-central part of the cave about four feet down, had hair that was “distinctly red.”

Now, let's look at the region of Lovelock Cave that was once above the waterline of a giant 8000+ square mile lake in the Pleistoscene era as the ice age glaciers were receding.

LINK: At its peak approximately 12,700 years ago (during a period known as the Sehoo Highstand), the lake had a surface area of over 8,500 square miles (22,000 km2), with its largest component centered at the location of the present Carson Sink. The depth of the lake was about 900 feet (270 m) at present day Pyramid Lake, and 500 feet (150 m) at the Black Rock Desert. Lake Lahontan, during this most recent glacial period, would have been one of the largest lakes in North America.

Climate change around the end of the Pleistocene epoch led to a gradual desiccation of ancient Lake Lahontan. The lake had largely disappeared in its extended form by about 9,000 years ago. As the surface elevation dropped, the lake broke up into series of smaller lakes, most of which rapidly dried up, leaving only a playa. These playas include the Black Rock Desert, the Carson Sink, and the Humboldt Sink. The only modern remnants existing as true lakes are Pyramid Lake and Walker Lake. Winnemucca Lake has been dry since the 1930s and Honey Lake periodically desiccates. The ancient shoreline is evidenced by tufa formations throughout the area.
http://water.nv.gov/mapping/chronologies/humboldt/hrc-pt2.pdf
11,200 Years Ago (Prehistoric Human Occupation) The record of man’s existence around Lake Lahontan, including the lower Humboldt, Truckee and Carson River Basins, began at Fishbone Cave, located on the eastern shore of the dry lake bed of Winnemucca Lake in the Truckee River Basin. Excavation of the cave produced bones of horses, camels, and marmots, as well as burned human bones. Little else has been revealed about these Paleo-Indians who lived on the shores of Lake Lahontan and its remnant bodies of water near the end of the Pleistocene Epoch.

Archeological evidence has revealed that the Lovelock and Ocala Caves served as homes to man from 2,000 B.C. to about 1840 A.D. The artifacts left behind tell of the successful adaptation to a lakeside environment. Leonard Rock Shelter, located not far from these cave sites and now a National Historic Landmark, has shown human occupancy dating back 7,000 years.

6,900 Years Ago (Circa) The Mount Mazama eruption (tephra)21 that created Crater Lake (Oregon) also produced a distinctive widespread layer of ash found in many archeological sites and eroding stream channels in northern Nevada and particularly within the Humboldt River Basin. The ash from this eruption formed a visually distinctive marker horizon in sediment and soils with unique chemical and petrographic characteristics which allow it to be distinguished from all other known tephra beds in the area. Consequently, it has become a particularly useful chronological benchmark throughout much of the basin.22

Is there a documented history of Native people driving the enemy (especially giants) into a cave and setting it afire to asphyxiate them?

Apache Death Cave is one example.

LINK: Following Apache raiders attacking a Navajo encampment in Northern Arizona, nearly every woman and child killed, and a few women taken away, the Navajo sent out scouts to figure out where the Apache had gone. When they discovered them in a cave underground, they decided to gather up sagebrush and dried wood and filled the opening (after killing the guards) and lit it, asphyxiating the Apache within. 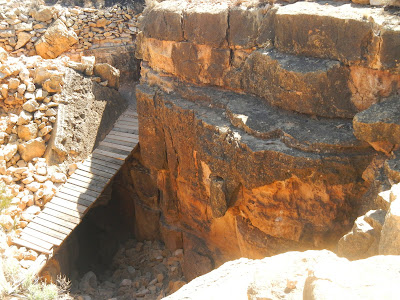 Photo from my own exploration of the Apache Death Cave

Another example is among the aboriginal people who tell of two women who trapped a cannibalistic giant in a cave and burning him. "Thardid Jimbo"

LINK:  A great giant in Aboriginal folklore. He stood seven feet high and had powerful arms and legs. He lived on goannas, lizards, and snakes. Once he killed a good man named Mummulbery, roasted the body and hung it on a tree. The giant then followed Mummulbery's tracks to his home and came upon his two sister-wives. He told to the frightened women that he had killed their husband and desired to make them his own wives. The elder sister tricked him going into a cave and while he was in there closed the entrance with boughs, sticks, and logs, and set the wood on fire. The smoke filled the cave and Thardid Jimbo ran to the entrance, but found a blazing fire in front of him. He tried to leap over it but fell short and dropped into the fire and was quickly consumed by the flames.

Interestingly, Hanau Momoko translates to "lizard people" thought to be called this for being tall.

This is only the beginning of evidence accrued -