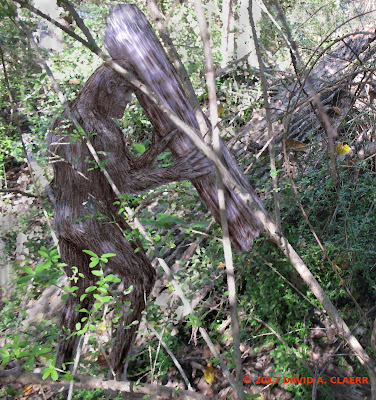 In researching a large, fairly contiguous area that encompasses Texas, Oklahoma and Arkansas, I have found that several extended family units seem to have a higher degree of intelligence than is generally noted or assumed, including the ability to fashion stone tools and use other found objects such as antlers and bone fragments. The most notable examples of tool use were found in the Hill Country of central Texas.

The subject of this article, however is a small population or clan that resides in North East Texas, in heavily wooded terrain that is well watered by creeks and streams, with a patchwork of beaver ponds and man-made reservoirs. In this area I have not seen evidence of extensive tool use, possibly because of the dense undergrowth and ground cover.

In this region of Texas, during the late winter and early spring, there typically are heavy rains, and in recent years there have been sometimes torrential rains lasting for days and even weeks at a time. Although conducting research in these conditions is prohibitive, I sometimes venture out during breaks between outbursts to gauge the activity of the Sasq in these conditions. The Sasq are very hardy beings and forage outdoors in most conditions, and although in this area they appear to be more nocturnal in their activities, the females, in particular often seem to forage for plant-based foods on a diurnal basis, that is, around the early dawn and late dusk hours.

I was wondering if the Sasq might be adapting to the unusual hard and long rains by sheltering longer in natural caves or in recesses in the cliff faces, and additionally, by building shelters, while out on extended foraging missions. So I was rather gratified to discover a shelter constructed by the Sasq in an area they often frequent.

At this point I will shift to a narrative about the particular foray during which I found the shelter and took the photos included in this article.

During this foray I had a companion. We drove out to an area that is thickly forested with virgin timber, punctuated with lakes and marshland. On the outskirts of this area there are numerous farms and ranches. This area is prime habitat for the Sasq.

Upon entering the forest in mid-afternoon, there was a light persistent rain falling. Most of the deciduous trees were still bare of leaves, although there were many trees and shrubs that remained green throughout the mild Texas winters. After traversing the game trails in the outskirts and entering the deeper woods, we heard a communication signal - tree knocking- whereby a Sasq will take a stout dry branch and strike the trunk of a tree. Normally these knocks seem to come in series of two or three knocks. It appears that two knocks are a call to signal a Sasq's location to another , or perhaps to summon another to them. Three knocks appear to be a signal that there are intruders or a possible danger from a predator. The loudness of the knocks are an indication of the degree of threat. On this occasion we heard three knocks, and a few minutes later, three more knocks. The fact that the knocks were of moderate volume indicated that the perceived threat was not great.

Often in these circumstances, the Sasq will stealthily follow a person though the woods, keeping well hidden, and their naturally camouflaging hair, normally dark, makes them very difficult to spot. So did I see any Sasq that day? Well, possibly. There are deer, coyote, and bobcat that are large enough to create the same amount of noise and disturbance in the brush, and a glimpse of movement in the underbrush can be just about any large mammal. On that day I did see a larger grey form that dashed past a cross-trail up along a ridge-line that we approached on an ascent. But such sightings are indeterminate at best. At the time, I was fairly convinced that the grey form was a Sasq.


Not far from the trail crossing, where the two trails crossed at almost right angles, I noticed an anomalous cluster of leafy branches and slabs of tree bark that appeared to be resting atop a clump of bushes. I surmised that this was a shelter constructed by the Sasq.

When I inspected the shelter closely and entered inside it, I found that there was a hollow, dry center inside the over-arching branches of the bush-clump. On the top of the bush there were leafy branches that had been stripped from nearby trees. On the topmost layer, there were placed long sections of tree bark, about six -to-eight feet long by eight-to-twelve inches wide. A brief search of the surrounding area revealed a few standing dead trees, from which the bark had been forcibly torn off, which had required considerable strength, beyond a normal modern human's capacity. The shelter was also located under some enormous live trees, an elm and two beeches. The largest tree, a beech had a trunk 6 feet in diameter at the base. These trees provided a significant watershed. 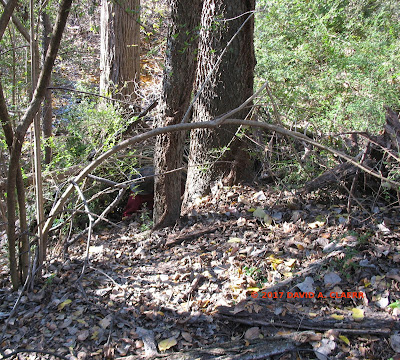 The view from the opening of the Sasquatch shelter The author can be seen inside wearing a red sweatshirt to the left of center. 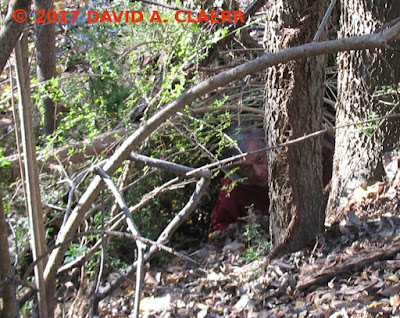 David peering out from the door of the shelter. The room inside was about 7 feet.

Following are views from different directions: 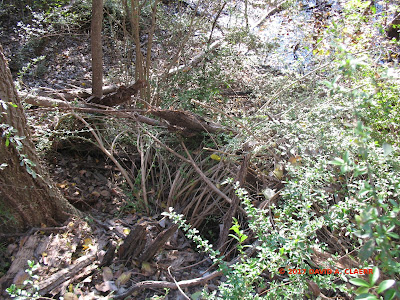 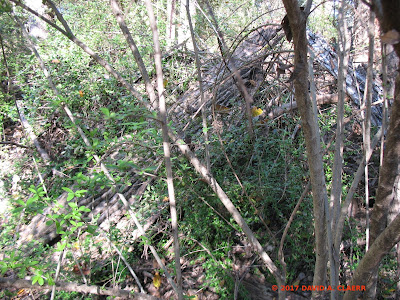 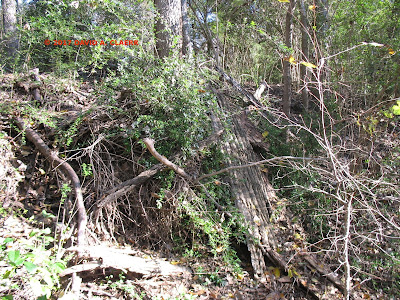 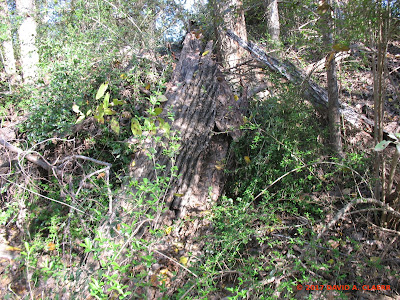 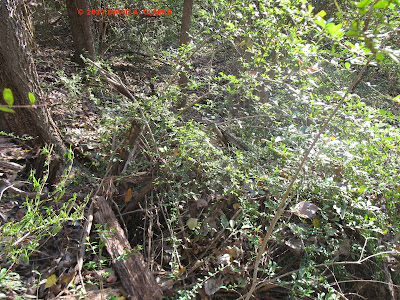 So, the construction of the shelter evidenced the ability to intelligently plan a series of complex actions that involved:

Selection of an optimal site for drainage, underneath the shelter of very large trees.
A natural structure that had arching supporting branches, and a hollow space underneath
Collection and interweaving of branches with large leaves to shed water
Extra roofing made of slabs of tree bark to shed water
Leaves piled around the base of the enclosure to keep water from flowing in
The shelter was not a random pile of material, but rather, a design cleverly crafted of diverse material

After inspecting the shelter and photographing it, we experienced another remarkable series of events as follows:

We made our way back out to the edge of the forest. We decided to linger a while, since the sky had cleared and the sun was shining through the canopy, shedding a golden light in the late afternoon. On the edge of the woods there are hiking trails maintained by the state forestry personnel, and we rested on a rustic bench by the trailside. Overhead was a lofty sycamore tree, and a flock of doves flew in and covered most of its bare branches. The doves cooed and twittered as we sat gazing upward.

Suddenly, three very loud tree-knocks sounded from close-by. I jumped up, startled by the sound, which was almost like gun-fire. The doves scattered in alarm. I looked down the trail in the direction of the knocks. Several hundred yards below, I saw two shambling human figures heading up the hill towards us. I watched them closely through gaps in the trees, and eventually I could discern that the two men were very filthy and dressed in shabby, tattered clothes. Their hair was matted and their faces covered in sooty grime. I almost could not believe my eyes , since they were probably the most unwashed and disheveled people I ever saw. I reluctantly sat down again, not wishing to alarm my female companion, who was tired from the long hike that day, which had lasted several hours and covered many miles.

As the men approached, I used a trick I learned from Native Americans to watch them closely, while not appearing to notice them. The trick is to lower your head, let your hair fall across your eyes, as you turn your face at right angles to them and look out of the corner of your eye through your hair. The trick worked, because as they suddenly saw us, they froze in their tracks and stared at us intently for a minute or so before they conferred, obviously whispering in each others' ears. Then, one man went off the path into the bush, and the other one proceeded towards us, crouching a bit and walking slowly, while steadily gazing at us.

Then- there was another series of knocks, though this time very soft, yet, again nearby. I perceived this to be a warning from the Sasq to be very cautious. So I slowly stood up as if to stretch, and turned toward the approaching man. When I faced him, he ducked behind a tree!

At the same time, I heard, and saw, the other man trying to sneak around behind us through the thicker brush!

I turned to my companion, and rather sternly said: “We need to get up and go right now.” Fortunately she immediately complied, possibly sensing the danger from the tree-knocks as well as from my adamant attitude. She jumped up, and we set off in the other direction at a fast pace, almost jogging, heading through an area of rough, unmaintained trails. Several fallen trees blocked these paths, which probably also helped to slow down and to discourage our pursuers. We hopped branches and ducked under or went around the treefall . We had to make a looping circuit back to our car, and we kept up a fast pace until we reached it and sped out of the area.

In the end, I felt that the Sasq were initially tolerant of our presence, and possibly could tell that we respected them and and wished them no harm. Later, they were probably warning us of these dangerous and most likely criminal folk who probably either lived nearby, or were subsisting there in the forest as fugitives.


Experiences such as these indicate that the average Sasq is intelligent, resourceful and can be empathetic and have an altruistic disposition toward those who show them respect. 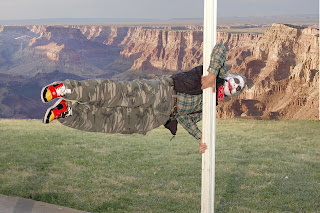 ..and he can sometimes be seen hanging around.