**This is a guest post by researcher, Karl Sup. For more of the prior installments about the Long Island Sasquatch, please see these links - 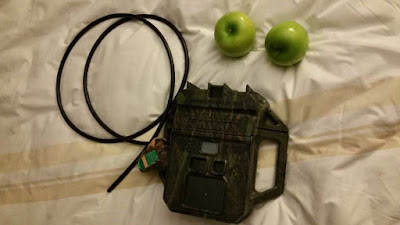 Due to rainy days and some long work days, I sadly wasn’t able to get back into the woods until May 12th. The weather forecast that week looked like it was going to be good, so I decided to bring along my Reconyx 600 game camera to try something new. I reasoned that the odds of a Sasquatch person having encountered a game camera on Long Island was slim to none. Armed with apples, an empty CF memory card and fresh batteries, I headed into the woods that evening. 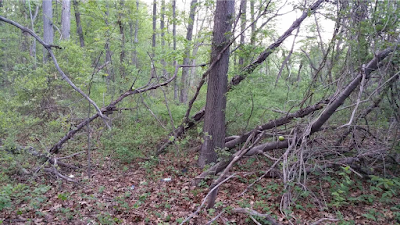 It was a beautiful spring evening around 7:30 PM with a temperature of 79F with little wind. I set up two apples, one on the usual branch and the other on the lower branch. I placed the camera about 8 feet off the ground on a small tree. This picture was taken from the vantage point of the game camera. I scouted and documented the area. I did note by comparing the trash pile pictures taken in April to the current layout that several of the items had been moved or dislodged from their previous resting places. All three items that were moved were plastic containers. One had some water in it still, with the cap on it! I returned the next day about 6 p.m. to discover that both apples had been taken. I was very excited and hopeful. I pulled the CF card from the Reconyx and downloaded them to my laptop. What I discovered was very puzzling. 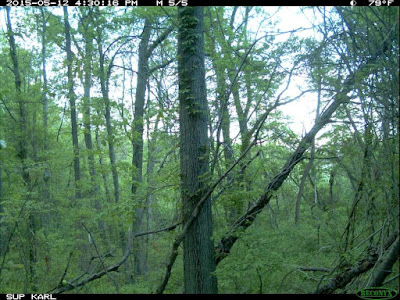 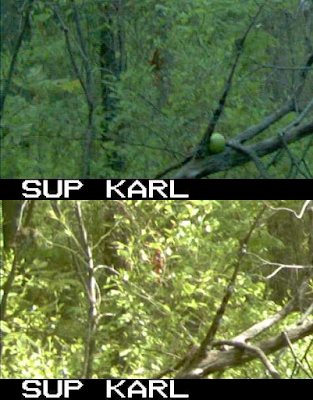 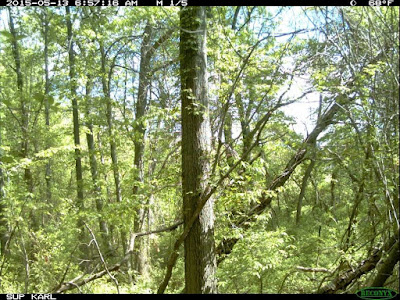 First, I was disappointed that the tilt of the game camera put one apple out of view and the other almost out of view, but in the lower left corner. Frame 5 was the last in the series of pictures the Reconyx took while I was setting up the camera and apples and had a timestamp of 4:30:16 PM (PST), or 7:30:16 PM in New York. Frame 6 on the card was taken at 6:57:16 AM (PST), or 9:57:16 AM in New York. The apple had simply disappeared. It could not have simply fallen off the branch, as I had wedged another branch against the apple. Nothing tripped the camera overnight. Other pictures were taken during the day in which small branches or leaves triggered the camera. I did not have a good answer.

In addition to the apple disappearing from frame, the camera had also been adjusted. Initially I thought it was a trick of the eyes between the dusk and morning sunlight, but once I overlaid and toggled the images the camera had been slightly moved (see animated GIF - here -)

I had it cabled to the tree very tightly, so I cannot explain how or who had pushed on it. When I discovered that the camera was pointed too high, I tried to adjust it while it was still cabled. It was very hard to budge. I left the woods at 6PM hopeful that whatever had taken the apples would return.

The camera operated just fine during the day and night and took numerous photographs that were triggered by a light breeze moving small branches and leaves. Some of those wind-blown leaves were beyond the apple that triggered the camera, and yet the apple had simply disappeared without being triggered. Even if something moved very fast through the frame and took the apple, the camera still should have been tripped and triggered a series of five photos. I have heard of this happening to other researchers but I have never had this happen before.

The next day the new apple was still there, so I placed another apple on the branch. Once again, the Reconyx operated fine overnight and captured several series of photos caused by branches swaying in a light wind. No apples had been moved or taken. The next morning I left a third apple and took down the game camera before driving to the airport and flying back to Arizona.

I spent time working from Arizona with a work trip to Minnesota bookended in between. I arrived back in New York late June 14th and was eager to check on the research area the following afternoon. The apples I had left were gone, however, I did find a print on the far side of the gifting branch and used my size 14 foot for reference. 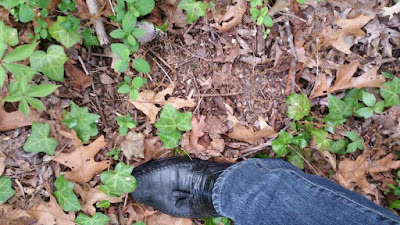 It was pressed into the ground and the forest litter was pulverized under it. What a difference 4 weeks had made to the woods. The canopy had returned and the forest floor was sprouting up ivy and saplings. The further I hiked in, the denser it became. 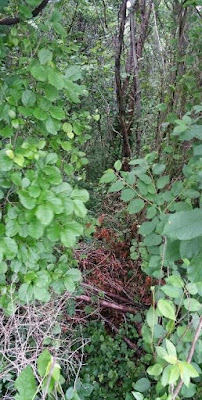 I found another print back in an area I hadn’t examined before that was the same size and depth as the other print I found; approximately 15 inches and a depth of 14mm. This second print appeared to be a left foot (center, circled), and a trail headed off to the NNE (upper right). 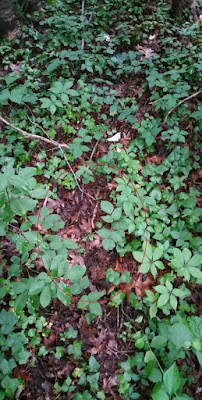 I followed it until I was unable to bushwhack further. At the edge of that print I found a walnut that had been bitten in two. The other half was not in the area. I always take a Ziploc bag with me on these walks so I collect it to examine back at the hotel. 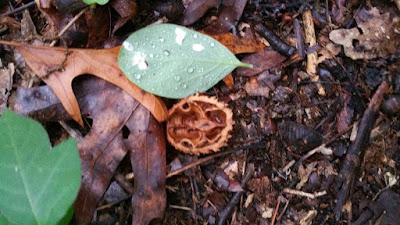 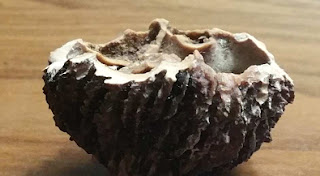 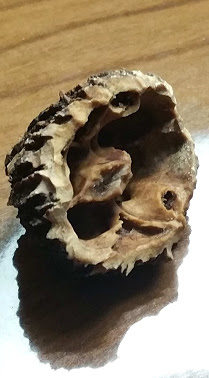 The walnut half shell appears to have been bitten into with a pair of central incisors. The areas of the bite marks displayed a definite separation of teeth. The cuts on one side were sharp and precise. The cuts on the opposite side were not as clean. As I was taking close-up photographs of the walnut, the air conditioning kicked on in my hotel room and details I hadn’t noticed originally caught my eye. Two hairs began to oscillate in the breeze. I haven’t had these tested yet, but I would assume that these hairs would have come from hands or lips. 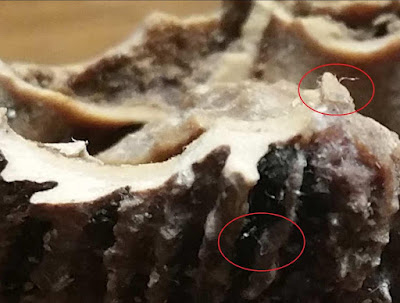 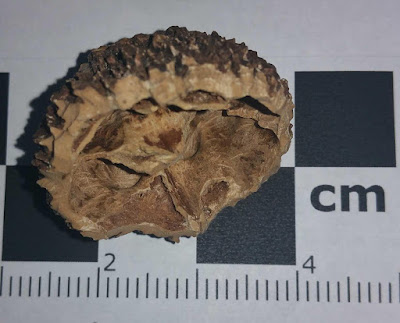 The incisor marks are nearly 12mm in width. The human range of incisor widths fall between 9.10mm and 9.24mm. The tooth that cut this was almost 1.3x larger than a human tooth. Combine that with its discovery location near the edge of a 15x5.5” print delivers some compelling circumstantial evidence. 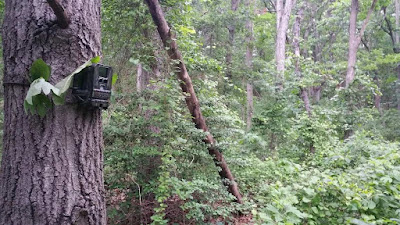 On June 17th, I set up my Reconyx again and loaded a few apples in the gifting branches. I placed the camera on a larger tree that was closer to the apples and tried to minimally disguise it. I also needed to work on back to back weeks in New York, flying home in between, so I decided I would leave the camera in the woods over the weekend. On the morning of June 18th, I checked on the camera and apples before heading into work and the airport. Both apples had been untouched, so I added the two apples on other branches that I had brought along to restock. 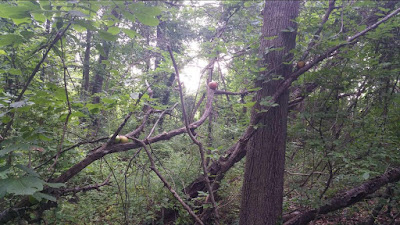 On Monday the 22nd I didn’t have time to get into the woods to retrieve the Reconyx, so I had to wait until Tuesday. All the apples were gone and the camera was loaded up with 128 photos, unfortunately a majority of them simply were triggered by wind and leaf movement, both day and night. The culprit who took the apples this time was also caught on camera at 15:38 PM on June 18th. 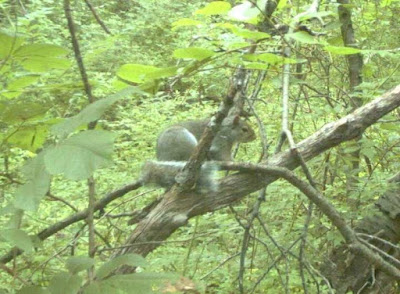 It was a grey squirrel. I was sadly disappointed, however I also know that the squirrel would not have left gifting rocks, as in the past. I took the camera down and spent the remainder of the week in Manhattan, contemplating my next move. 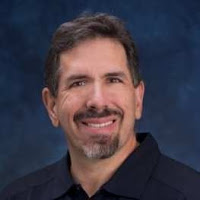