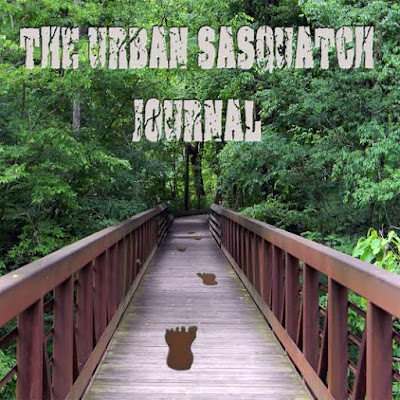 This report is difficult to write up knowing that all the items on or close to the ground have probably been swept away. Today's date is Friday Sept. 25. This means I have not been to the site in 18 days. I plan on going tomorrow PM. On Thursday the 10th, there was flooding that also effected the area at sites 1A &1B. This has been the 4th flooding of these sites since Sept. 2014. I like to do ground item experiments etc., but during flooding everything on the ground is carried away deeper into the woods. All items have to be relocated and brought back to the site. So today, again I'm not 'a happy camper'. I will have to deal with what I find and probably start over 'again'. The nearby major creek and ditch were at 3' over flood stage on the 10th. The following week I drove to the park and my parking area and parts of the picnic areas were under water. The water in the creek was right under the bridge instead of being many feet below. The nearby soccer fields were also under water. Also, after seeing the flooding this past year, I now know most (maybe not all) trash on both sites are due to this flooding.

So, here goes the report 3 days prior to the sites being flooded. I did take 27 photos. The report will consist of the explanations related to the photos and other comments as they come to mind. There were interesting changes that took place between August 30 and Sept. 7.

This being a holiday, I made an effort to go to the site early. I arrived at the parking area approximately 7:57 a.m.  The temperature was 78. It was clear with no clouds. The temperature eventually reached 95 for the day and partly sunny. After getting my back packing gear together, I hiked over to the site. I entered the area around 8:30 a.m. I did my signature whistling and announcing verbally my entering the area. I walked over to the pipes removed my backpack and noticed changes right away.


#1. and #2. The previous visit, I left the bear/bee doll in the crook of the low tree branch. It is now face down on the ground by a nearby pipe. 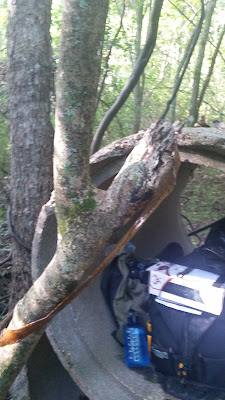 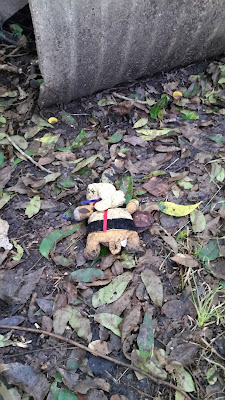 #3. and #4. The rocks, marble & yellow tent peg have been re-arranged. Compare with last visits photo. 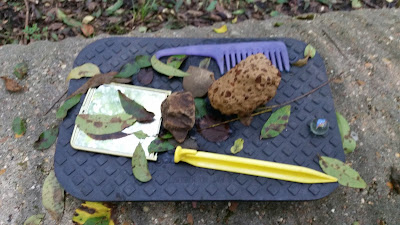 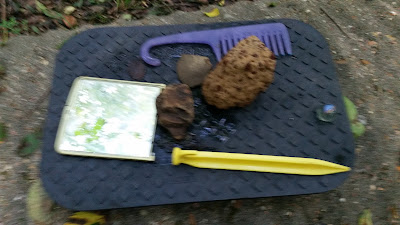 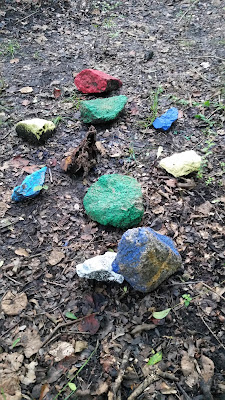 #6. and #7. At the ground stick figure hunter, the shoulder and head areas sticks and ball have been moved. 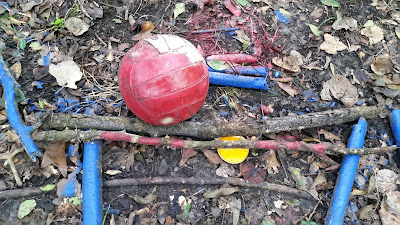 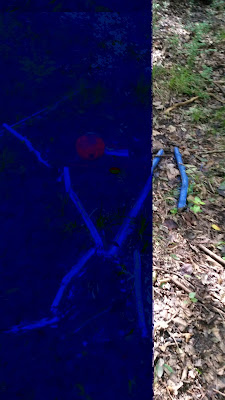 #8. At ground sticks glyph #3, the ball had been left in position with the #3 on the ball showing. It has been moved so the number 3 is not seen from above. 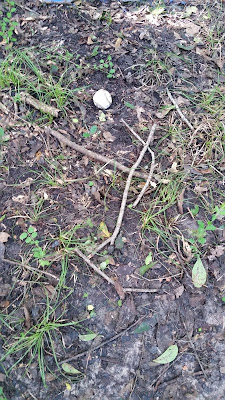 #9. Looking at the rock circle from the east side, the center wood piece can be seen again angled in the circle and the blue rock next to the white rock outside the circle. 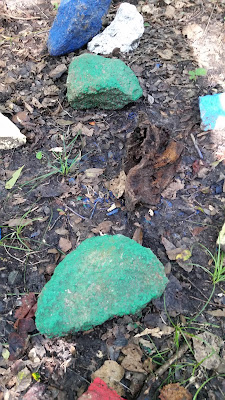 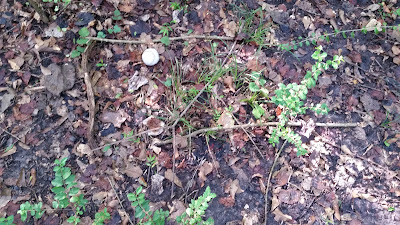 #11. The final deer corn pile with additional food items. For the near future, I will not be leaving any piles, etc. 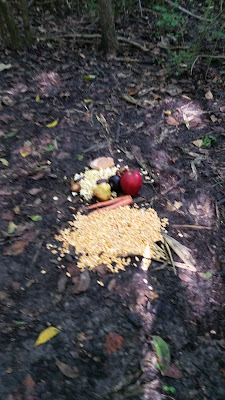 #12. and #13. I lowered the hanging food bucket to do an inspection. All food items were still there. I added some items and raised to 7' high. 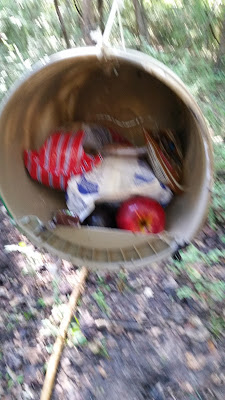 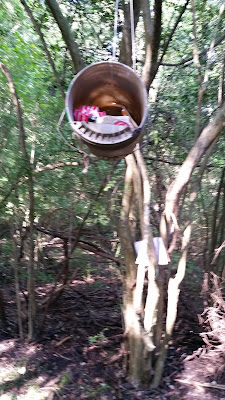 #14. I placed balls from the garbage can lids at the moved items at the rock circle. This is to acknowledge my awareness of what may have taken place. 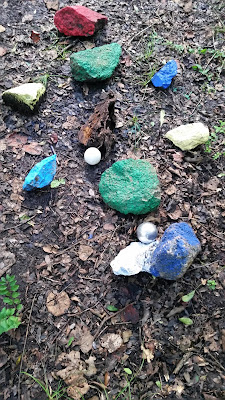 #15. I moved the 'Wilson' face ball with a water meter cover to a tree crook. I then place special colored small rocks as a set up for curiosity and possible movement, etc. 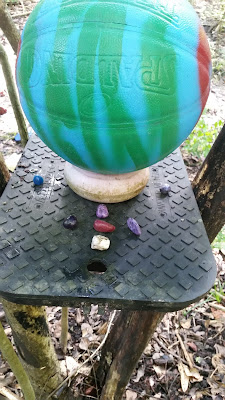 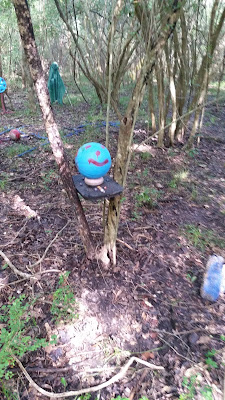 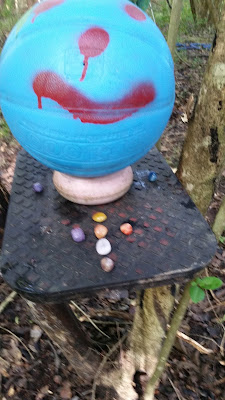 #18. I added a ball at the ground stick hunter to acknowledge the parts that have been moved. 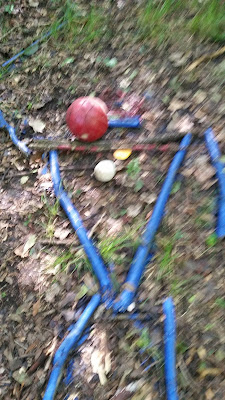 #19. I put the bear/bee doll back on the tree crook as it was previously. 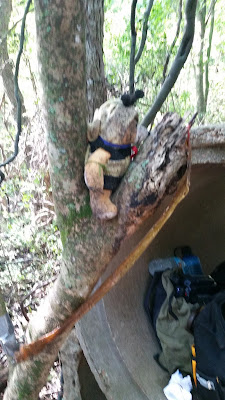 #20. I re-did the water meter cover set up on the pipe with 2 additional rocks plus the following additional items: 1 nail, the mirror, 5 small, special rocks, quarter, dime, penny. 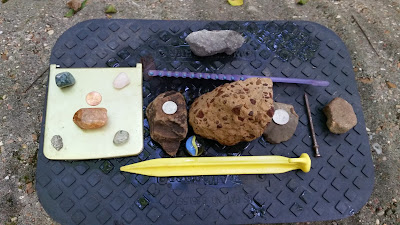 #21. I moved the white rock back to the 'arch-door' limbs opening. 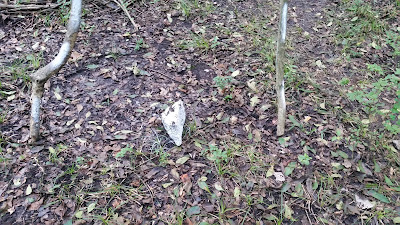 #22. I moved the smaller blue ball face to the tree with hub cap/nail. 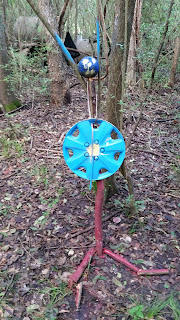 #23. At the tires, I removed the chain from around the small tree. The tires are now chained together as a group, still on the mound to the east. 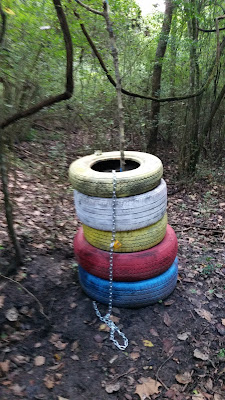 #24. thru #26. After leaving the sketchbook and markers out of their covers, I decided it would be better back inside the covers. The dampness freom rains, etc. still gets in the pipe and dampens the pages of the sketchbook. 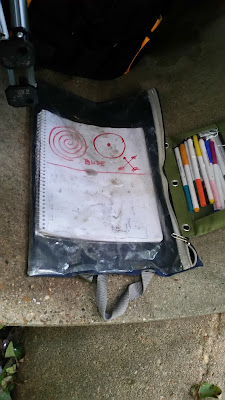 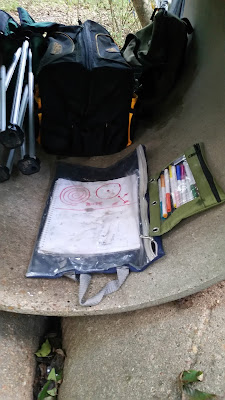 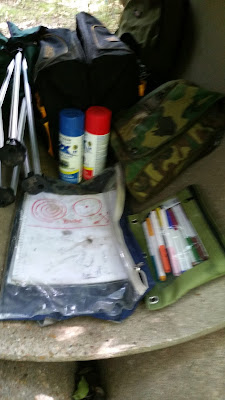 #27. I painted the 4 water meter covers red and the other piece green and added colored balls to the 4 direction points. This was put out to see if they would be moved. 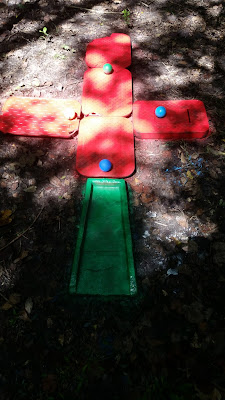 Tomorrow, I will start removing the dummy cameras.

Ok. As of today, all reports of field visits have been taken care of. The future hold more adventure and mystery. Tomorrow, I will discover if I have to start all over with ground setups plus checking on all setup and stored items within 3' off the ground. My camcorder tripod and poncho may have floated deeper into the woods? All the items I have in the opening of the top pipe may have floated away also? I'll find out tomorrow.