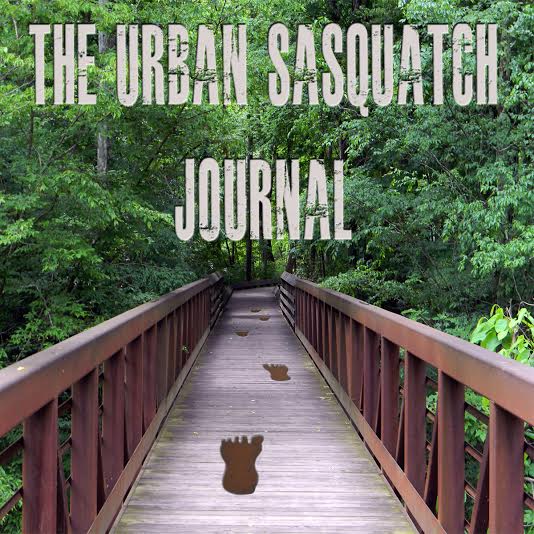 NOTE:  Green highlighter is done on the items that were moved between visits. 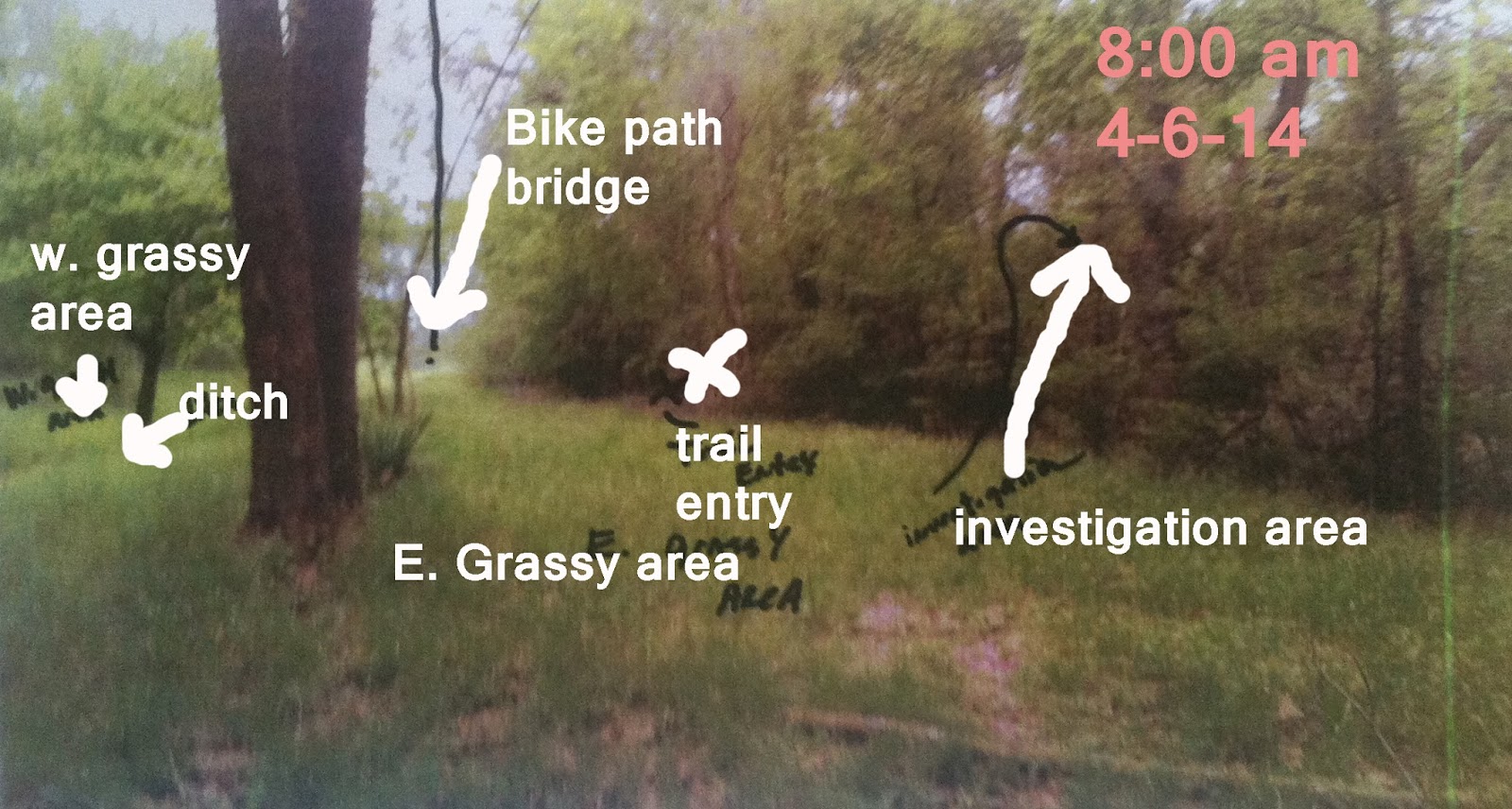 It was 59 and cloudy, had just rained during the night when I arrived at the site at 7:30 a.m.  I road out on the bike trail and saw 3 deer. They moved from the ditch into the treeline to the east, the side I travel on. 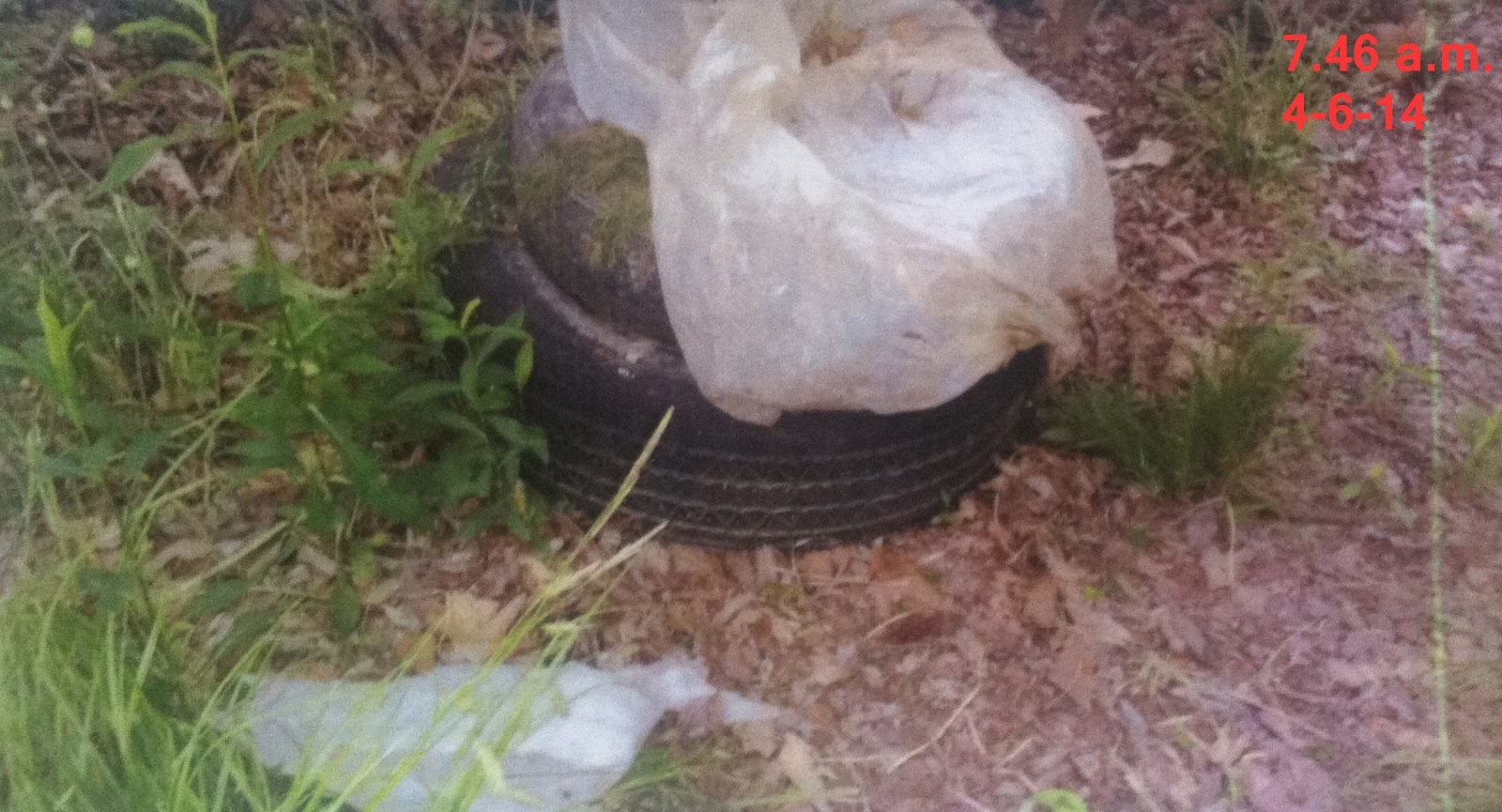 The tires were in the same location, but the limb with the plastic bottle and the zig-zag cigarillo foil wrapper had been removed. The foam rectangular piece that had been on the trail was moved also. 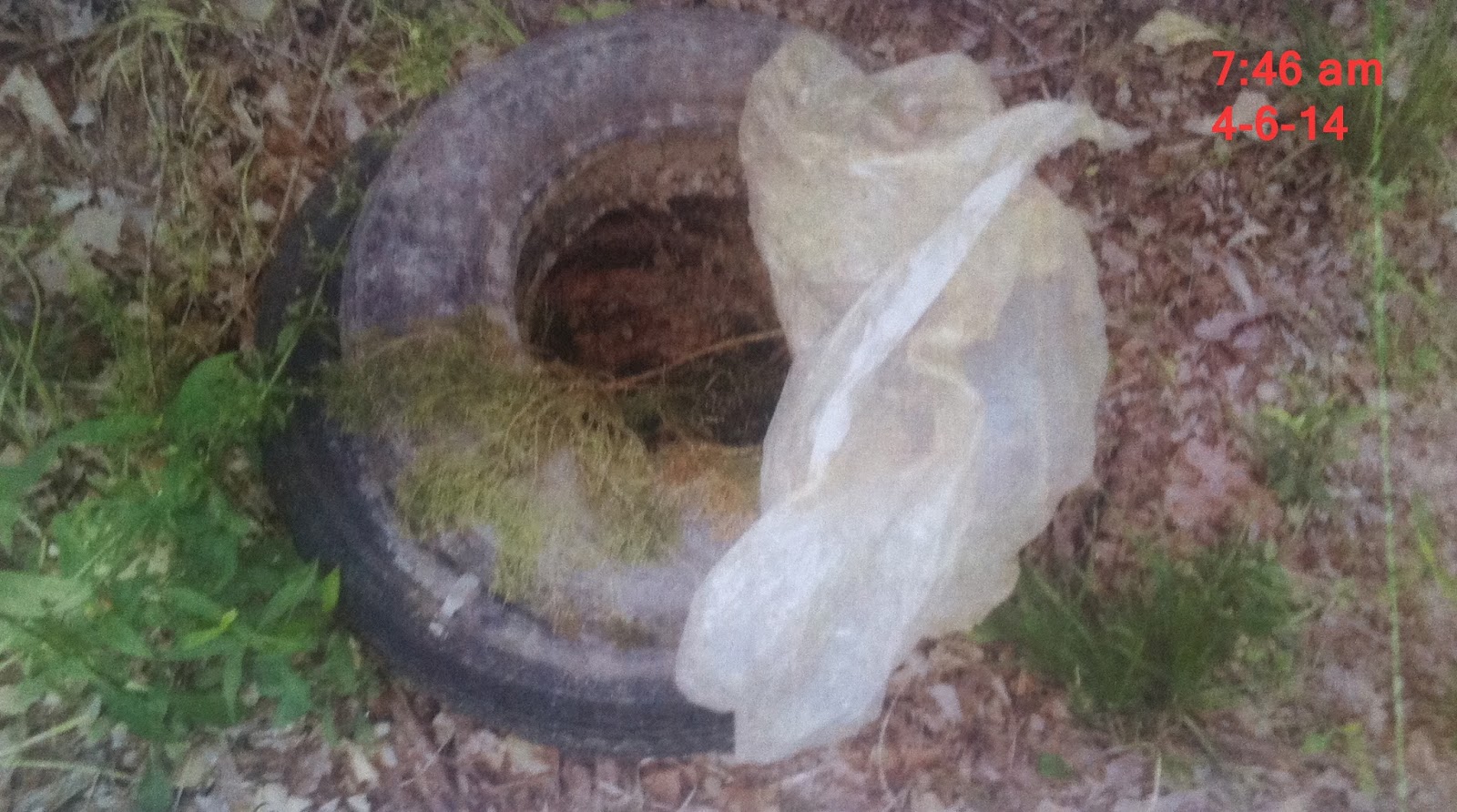 The following items were found scattered approximately 10 feet from the center of the tires:  3 plastic bottles, twigs, the zig zag foil wrapper. Also, the grass was beaten down in a 4 inch diameter close to these items. The arch limb with attached beer can remains at the trail entry. The 2 tires remain at the same spot and have not been moved. Across the top, inside the top tire is a broken cedar branch with cedar leaves. Over the cedar branch is a sheet of dirty plastic. The foam is near but jumbled. The sticks are gone. 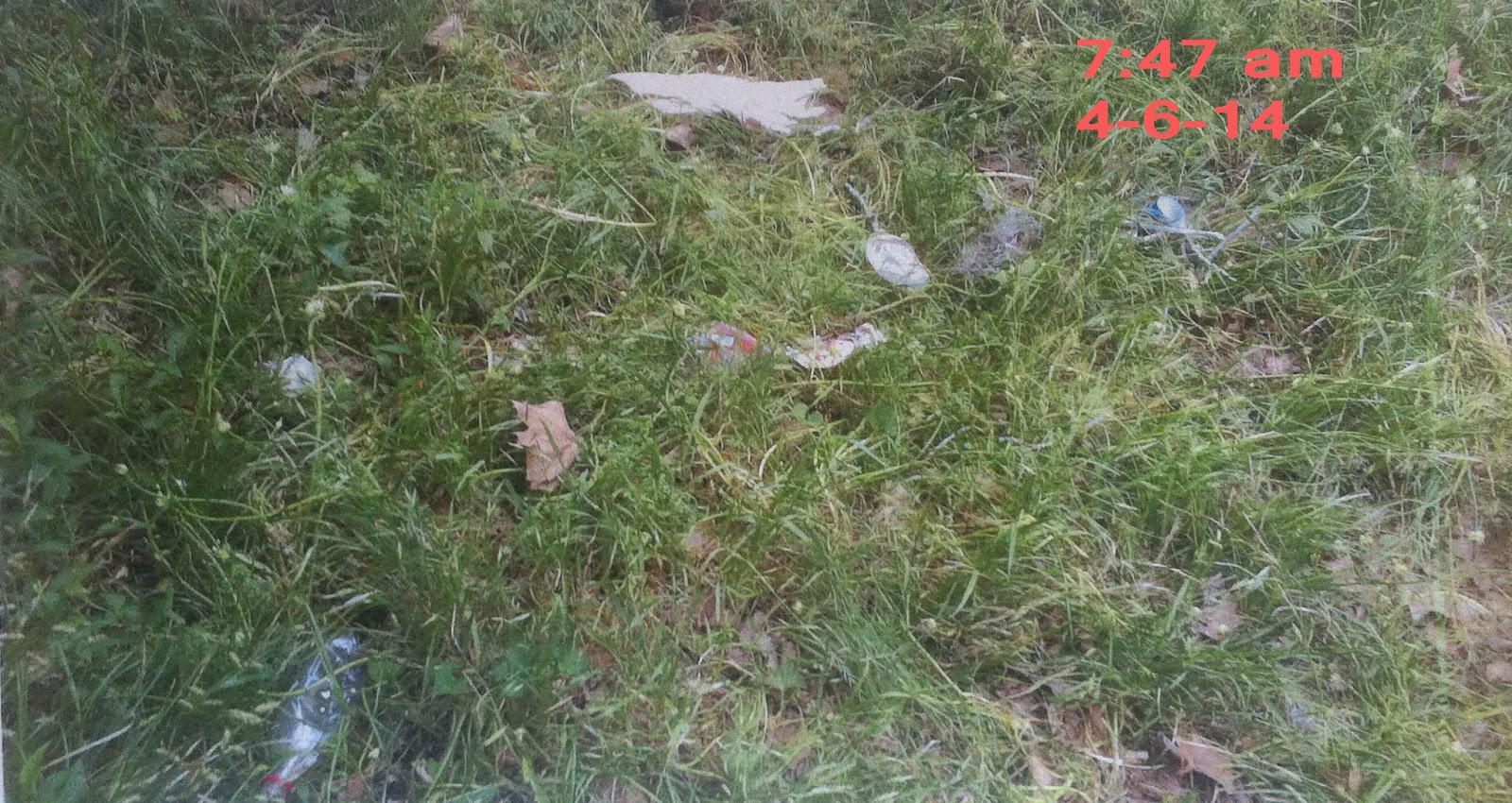 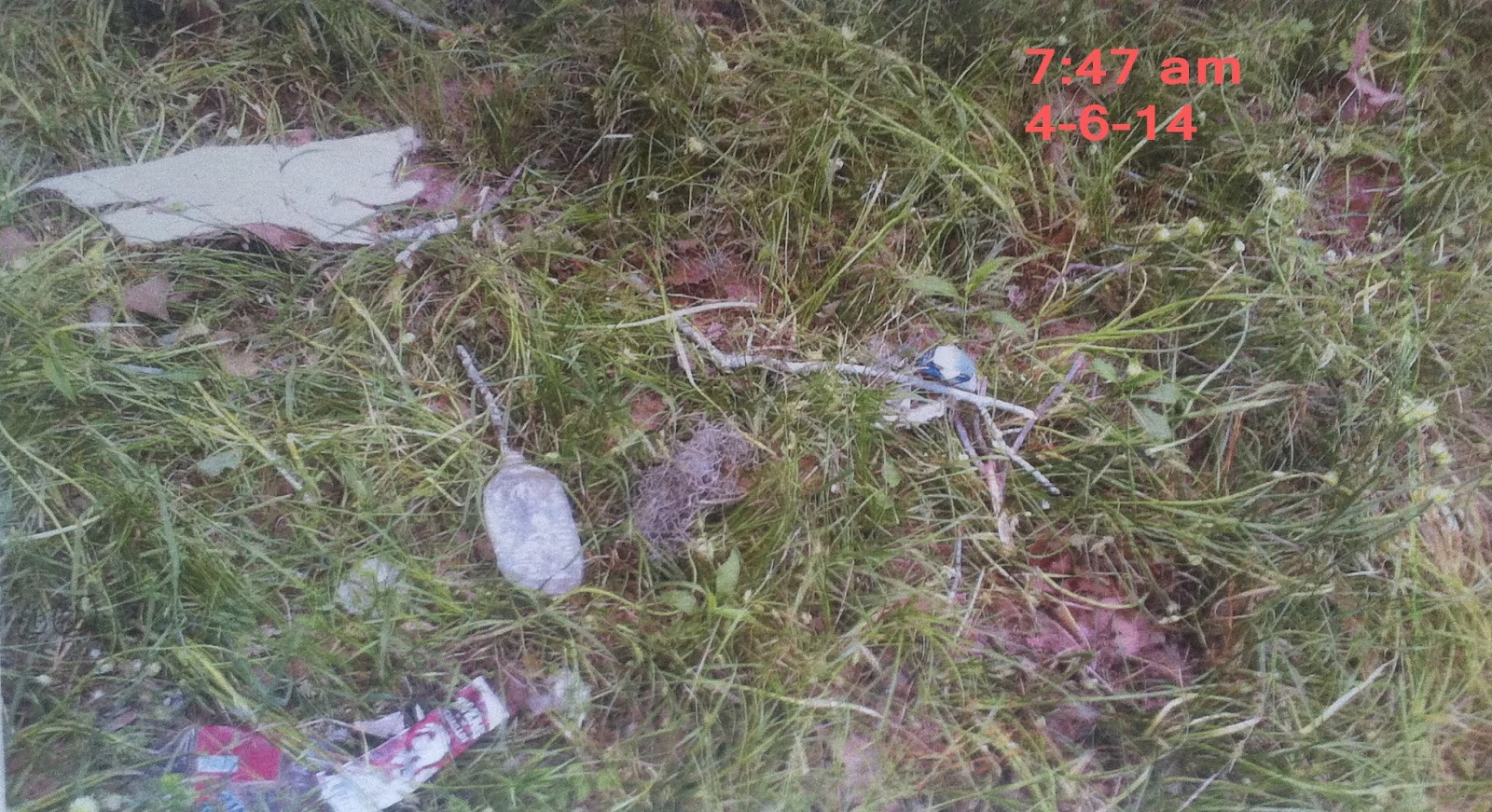 I brought a tire from home with me to add to the setup. I removed the plastic sheet and cedar and added the new tire to the pile. I photographed the new setup. The new setup was two tires stacked on the ground and one standing upright. I also added: moss, a bone, a small stuffed bumble bee bear), a foam rectangular piece. 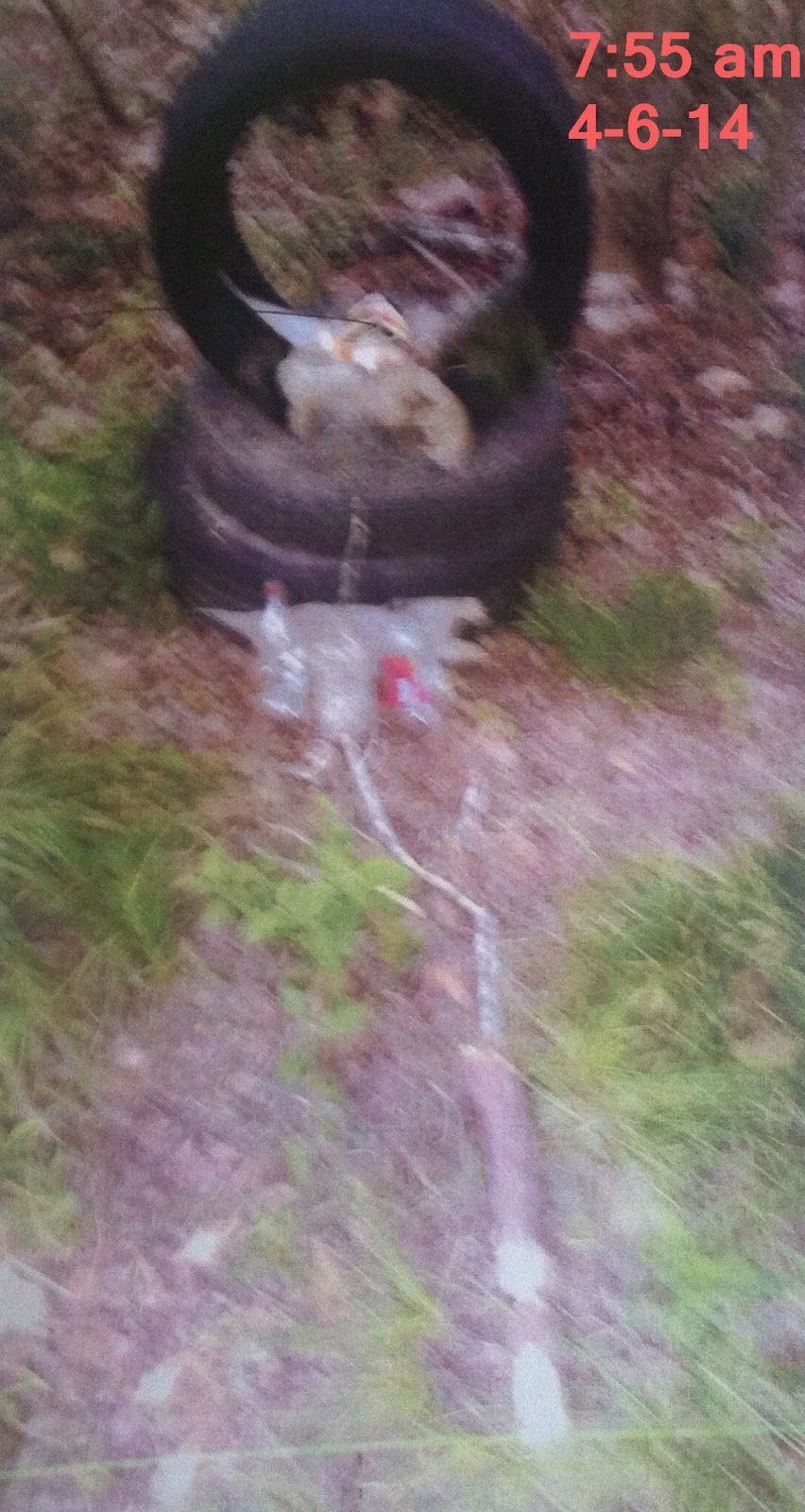 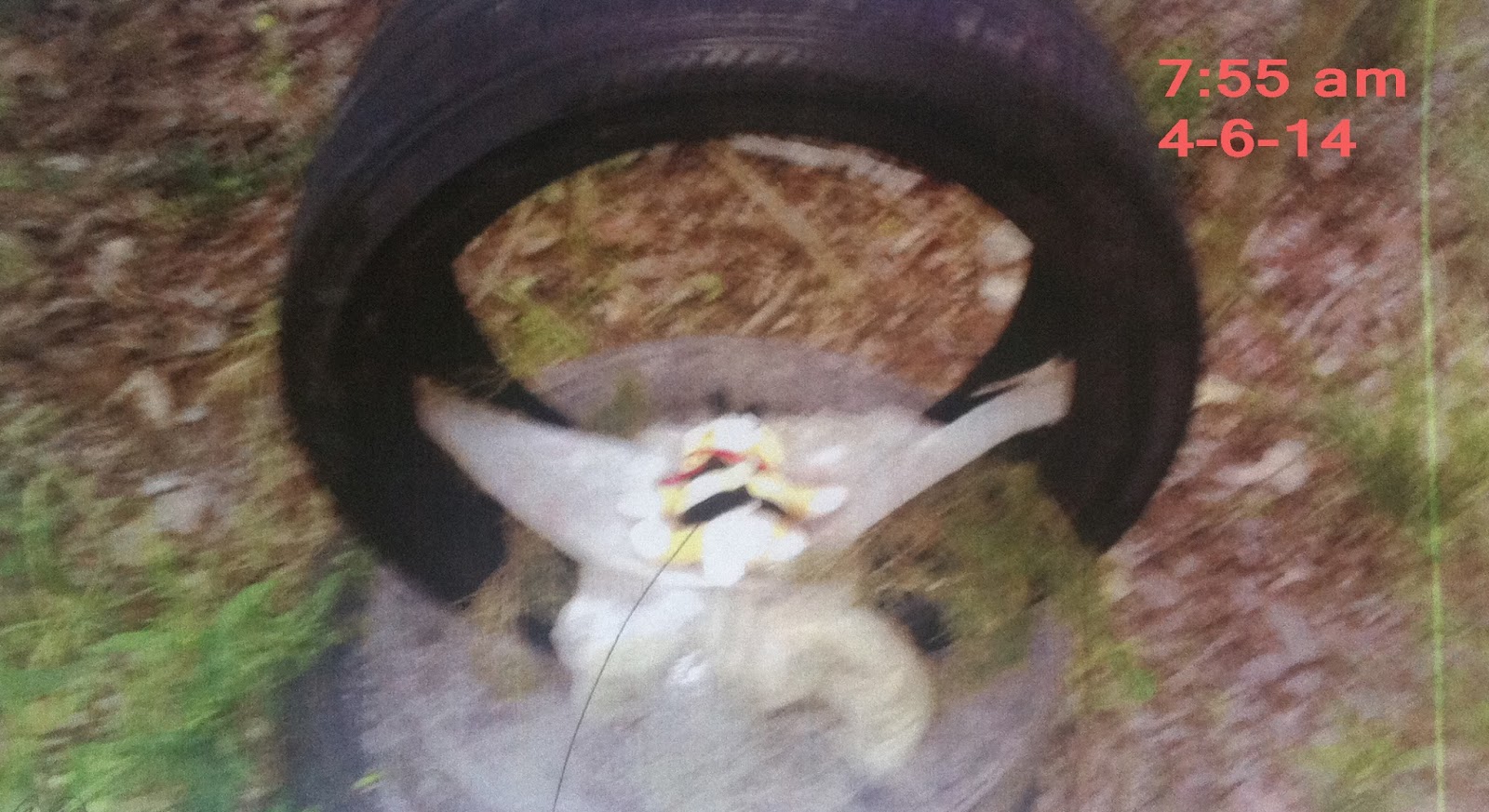 I took the items that had been scattered and put it all back at the tires. I also added a plastic bottle on a broken piece of the entry arch limb. After this, I noted wood shavings at 2 spots not far from the tires out in the grassy area. 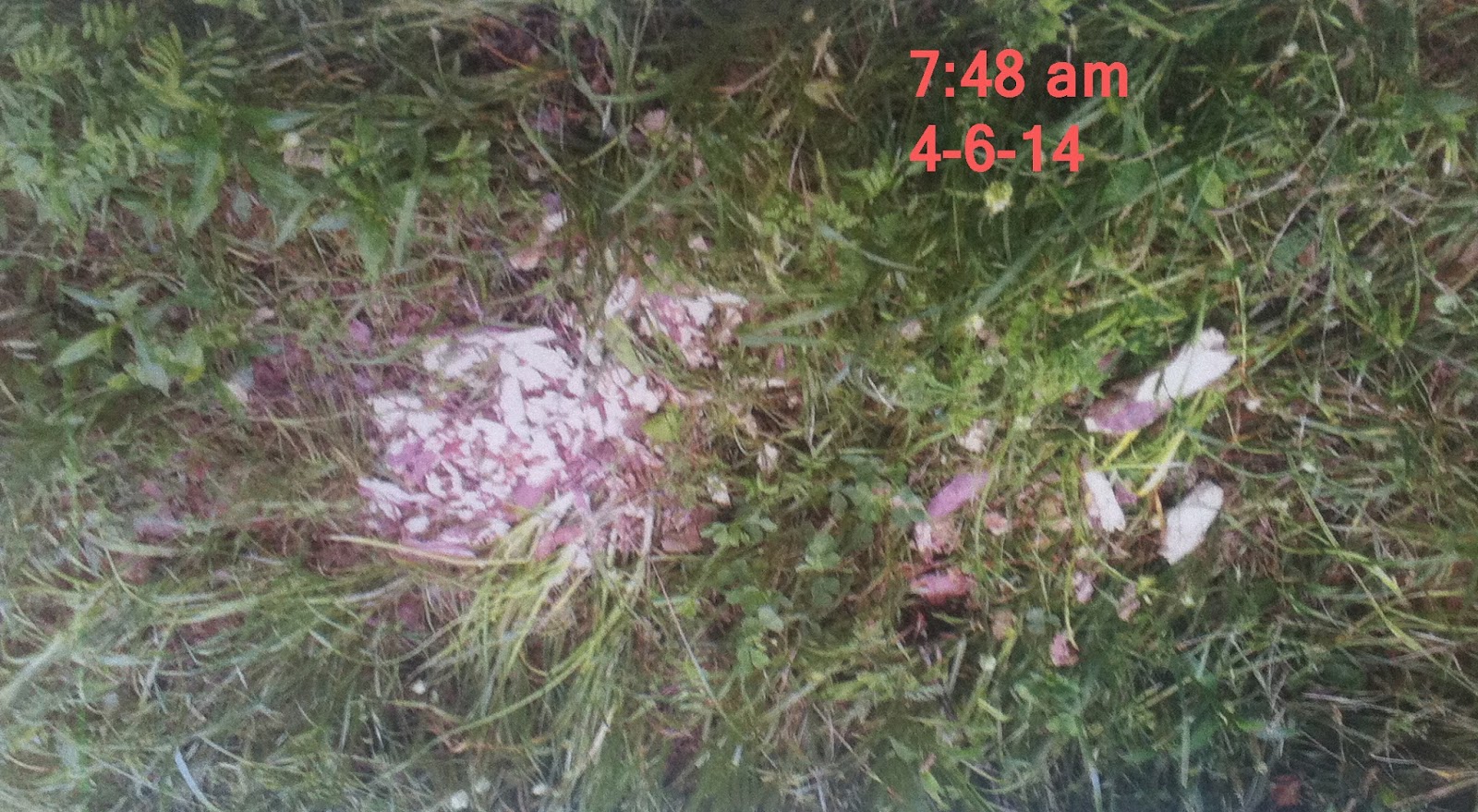 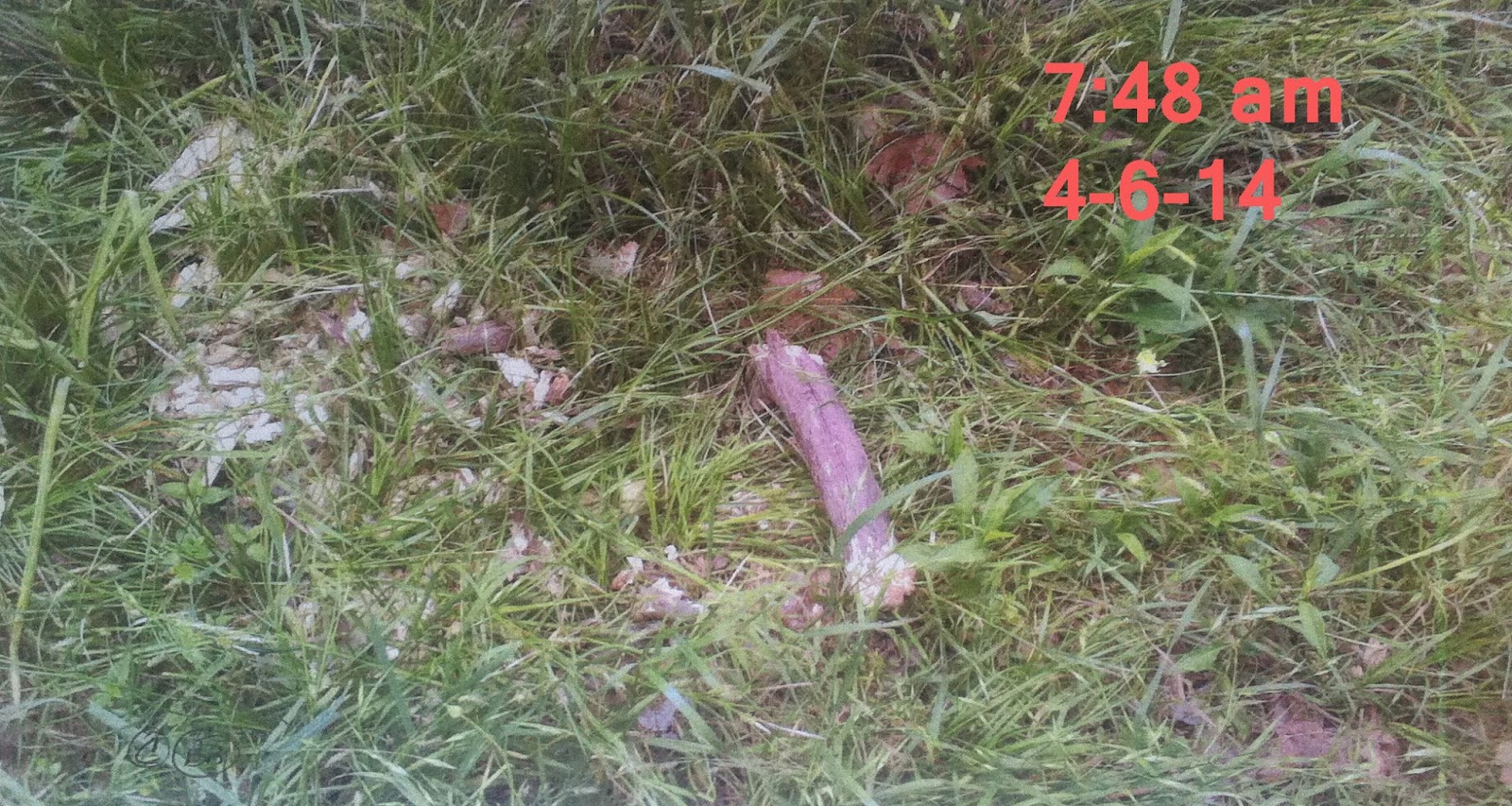 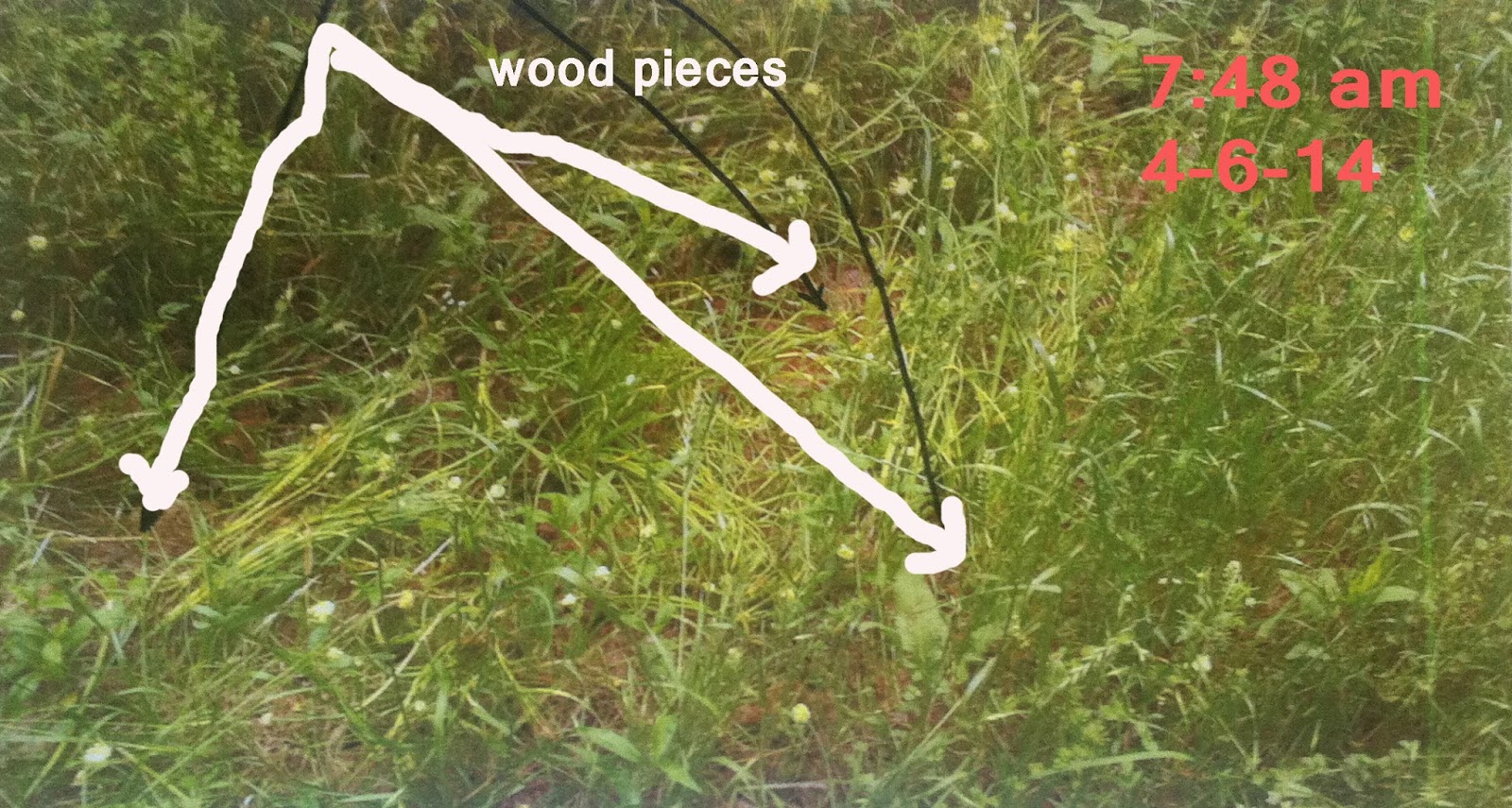 I then got on my bike and headed over to the right-of-way to the north and east entry trail. This time, the logs looked different on the trail. Actually, 2 logs looked together as a pointer marker. 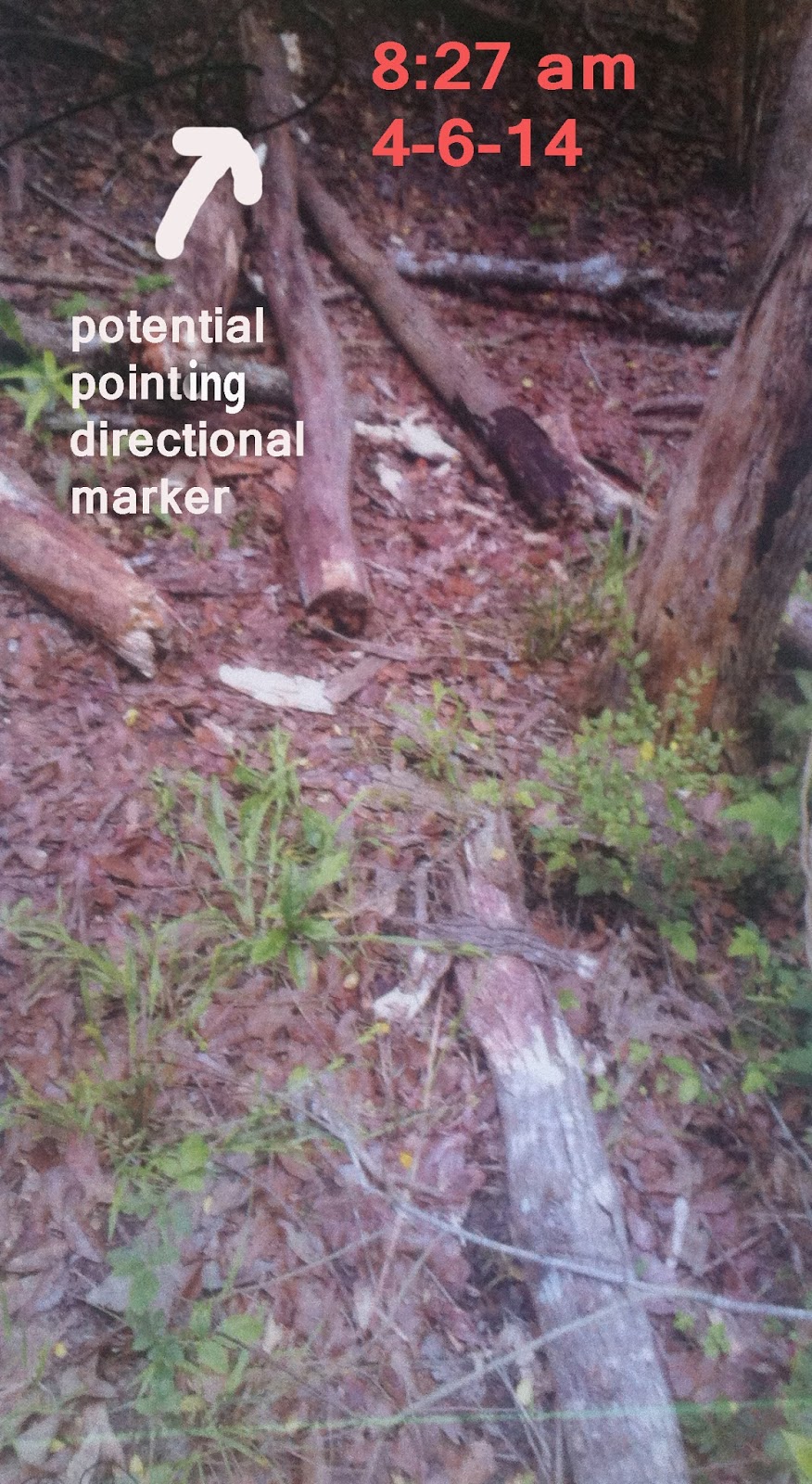 On this trail, I left a crossed stack of limbs as a "signature" formation from me, like an asterisk shape. 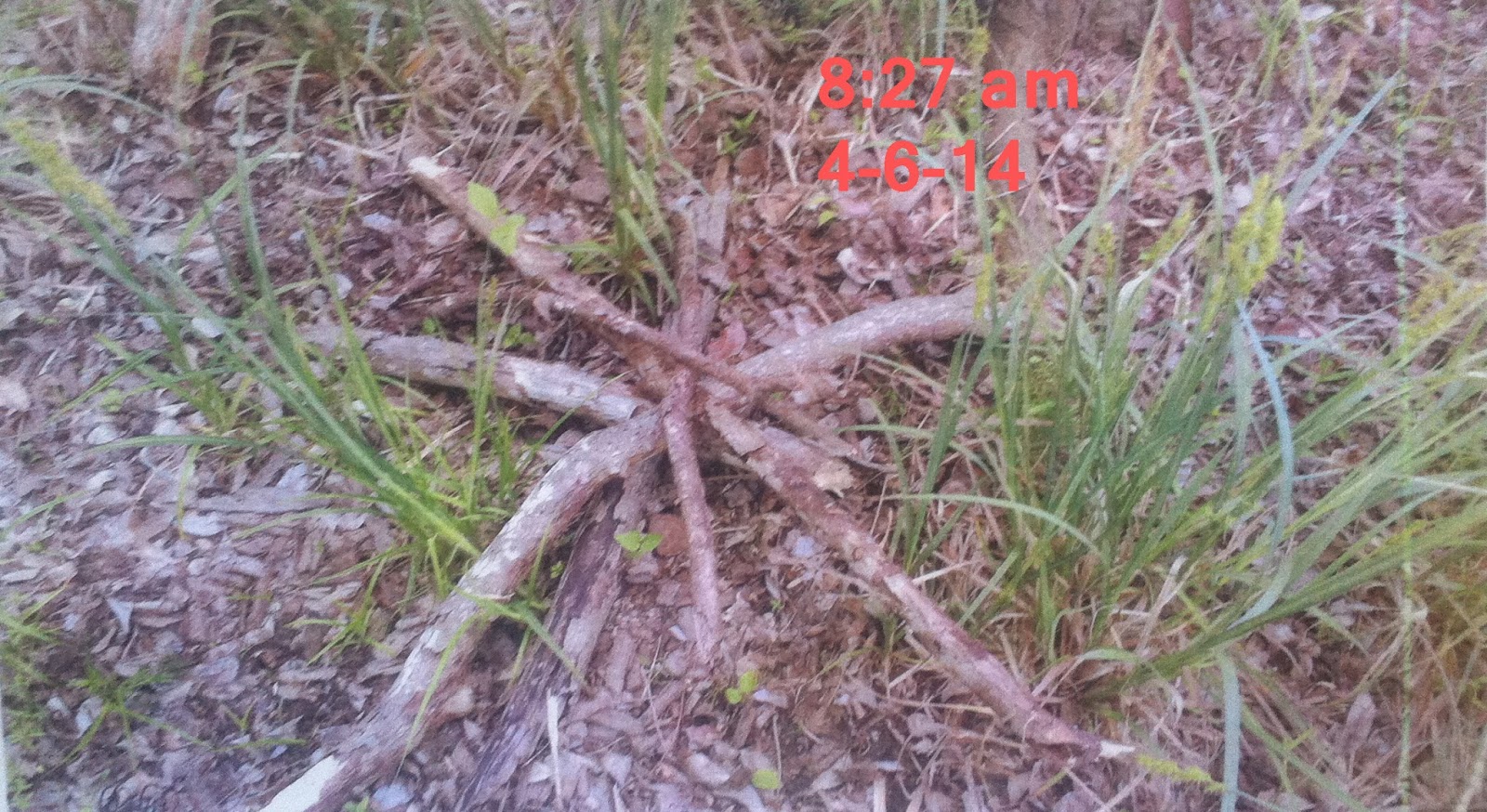 I went back to the tire setup area. I retrieved the bone I observed last week. I added it to the moss atop the new tire setup.  At this spot, I added another signature stack pile of sticks in a star formation. Will this be accepted?

It was partly cloudy and humid when I arrived at the parking area at 7:20 am. Today, I brought my bike, planning to bike the almost 7-mile route today. 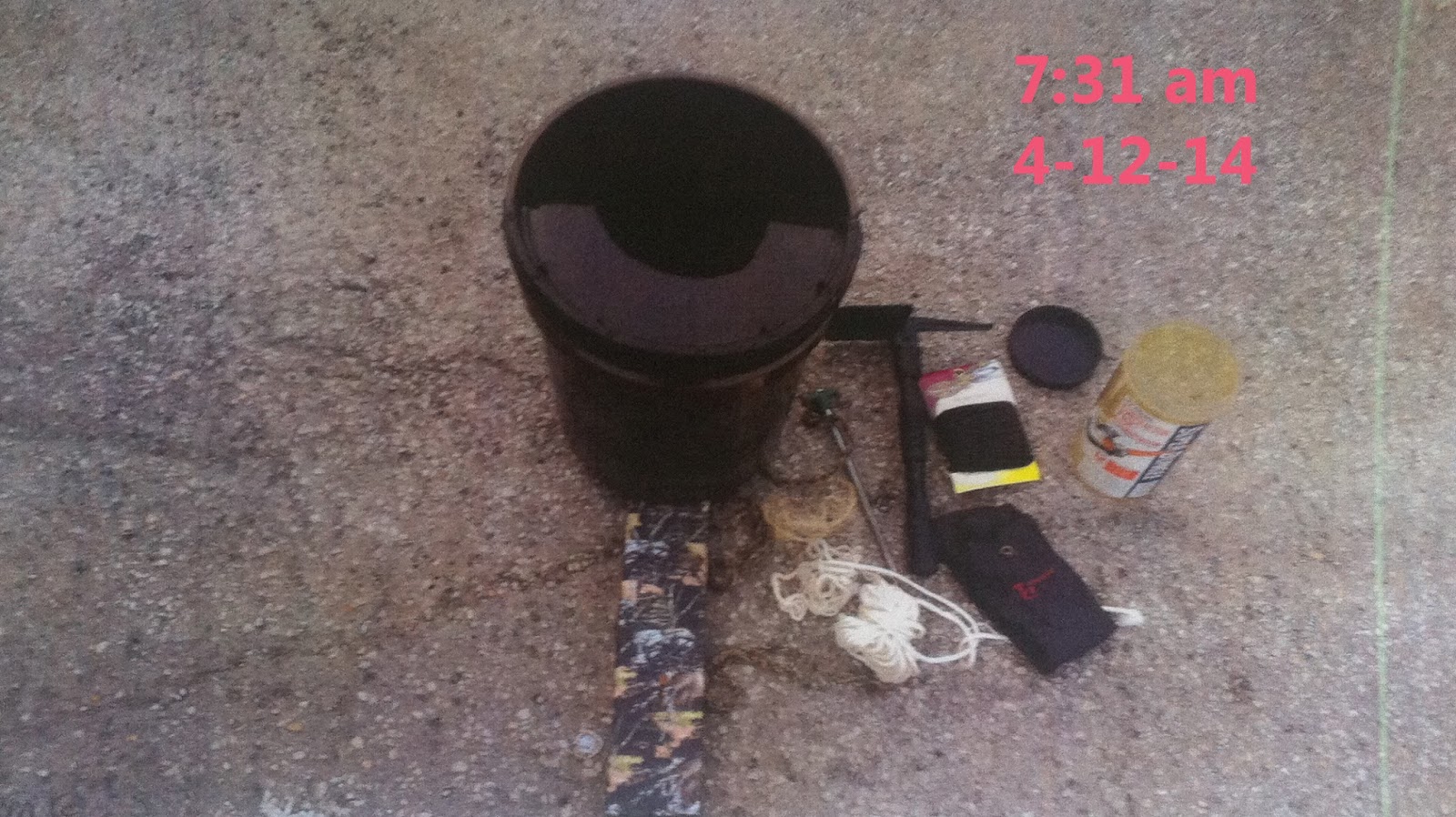 On the ride, I stopped to check on the three locations. I also brought a new item, a "gifting" bucket (Academy camo bucket). I also used camo tape on the 2 inch by 4 inch wood attachment of the bucket. For gifting, I decided to leave inside the bucket, a combo spade/pick axe, metal camping tent stake, a plastic container of ropes, strings, et cetera; all of these practical items. 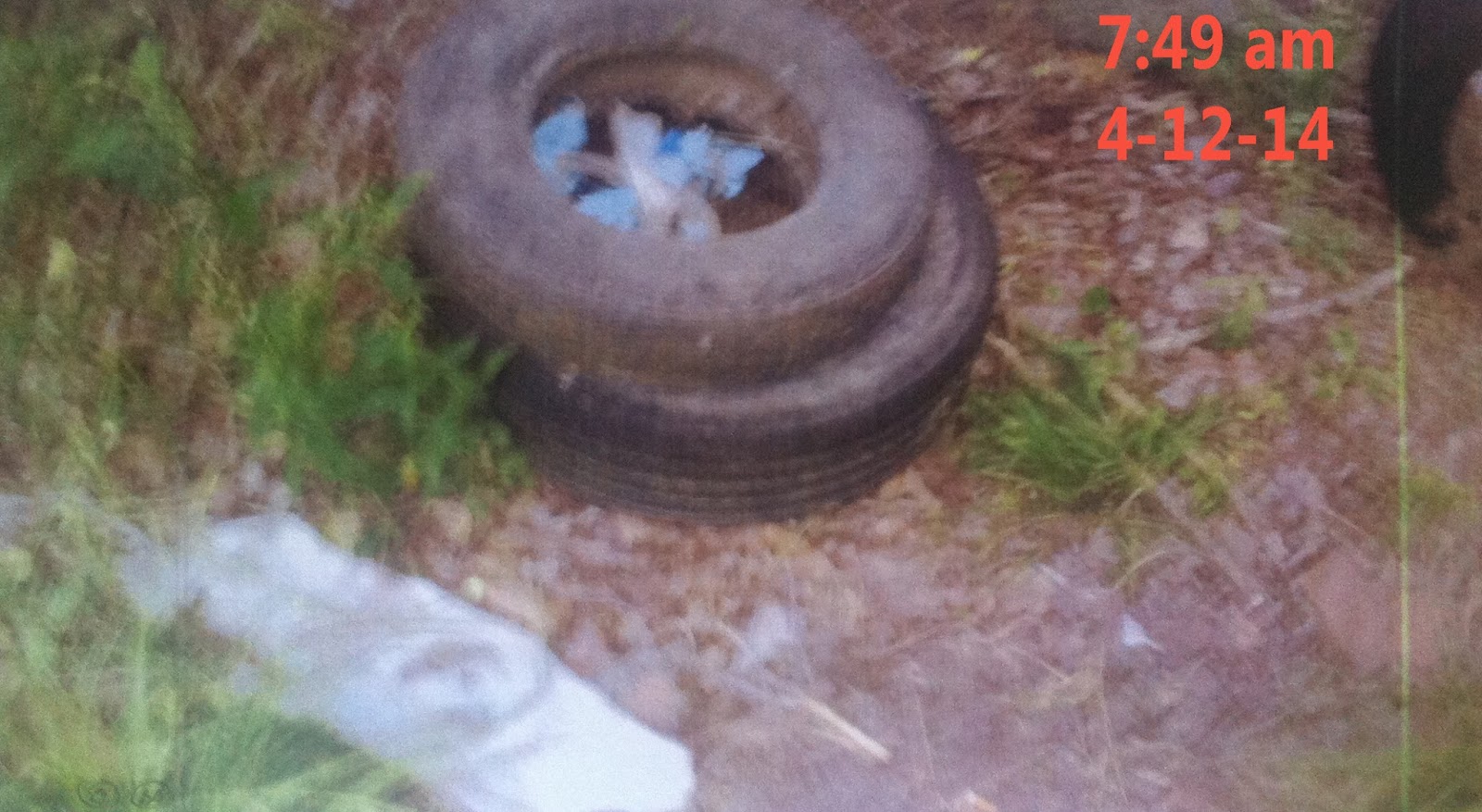 My first destination was the tire setup area. I wasn't entirely surprised at this point when I discovered it had been changed. The standing tire that had been on the two stacked tires had been moved next to the two tires, still standing, but closer to the trail entry. The moss and bone with a stick were on the ground behind the tires. The plastic sheet and cedar branch were in the opening of the standing tire. The ground items had been moved. Plastic bottles and the Zig Zag cigarillo foil wrapper were on branches around the trail opening and the limb archway.

But, the bumble bee stuffed animal was nowhere to be seen. I looked around me and my eyes caught something white that looked like cotton on the ground in the grass area. I didn't recall seeing this the last visit. 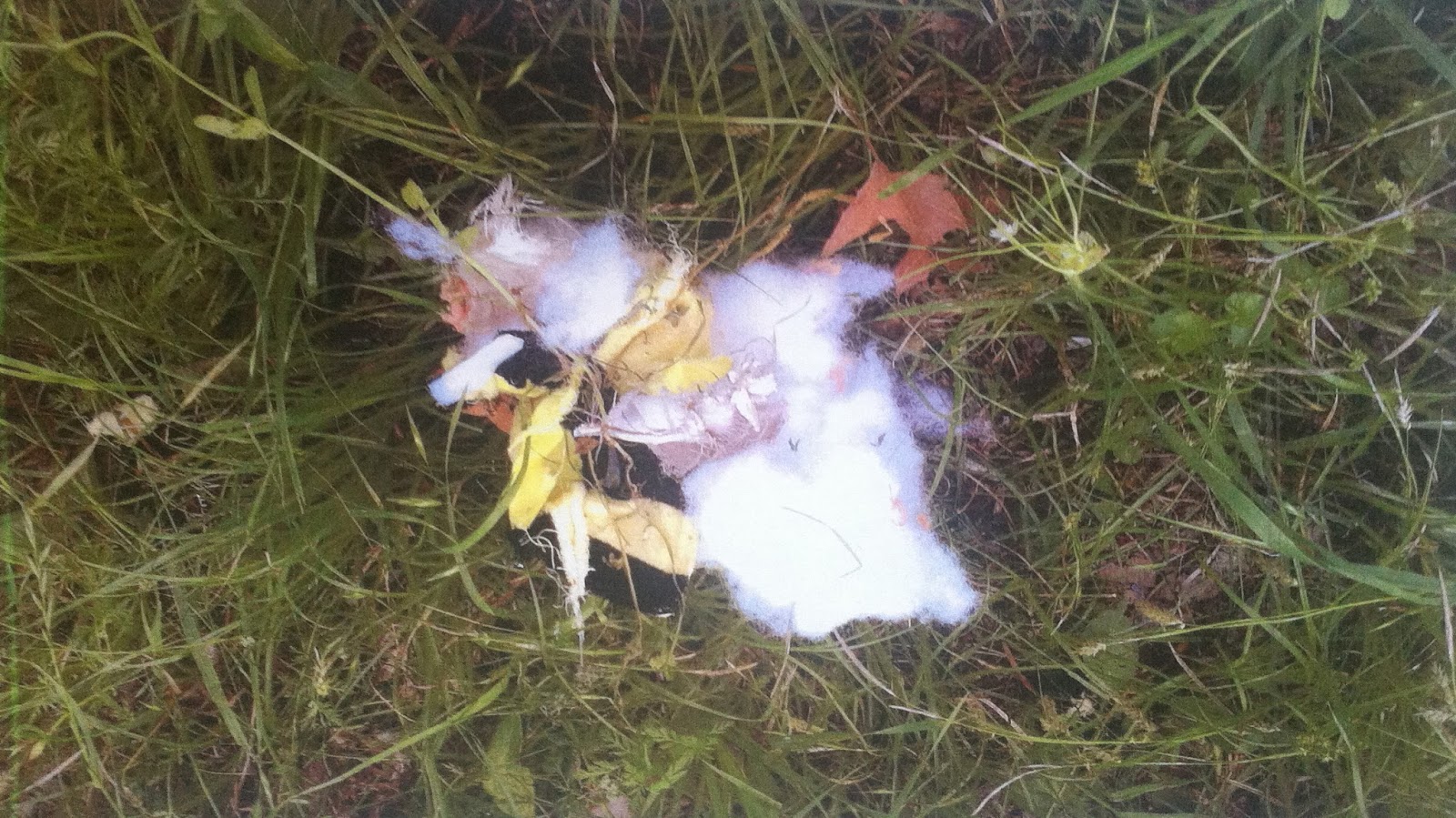 I picked up my gifting bucket and went deeper into the woods to find a place to mount it. I bungeed along the top and bottom of the 2x4 boards attached to the bucket. I put the items inside and then took note that my trail signature marker stick pile had been scattered.  I then left that area. 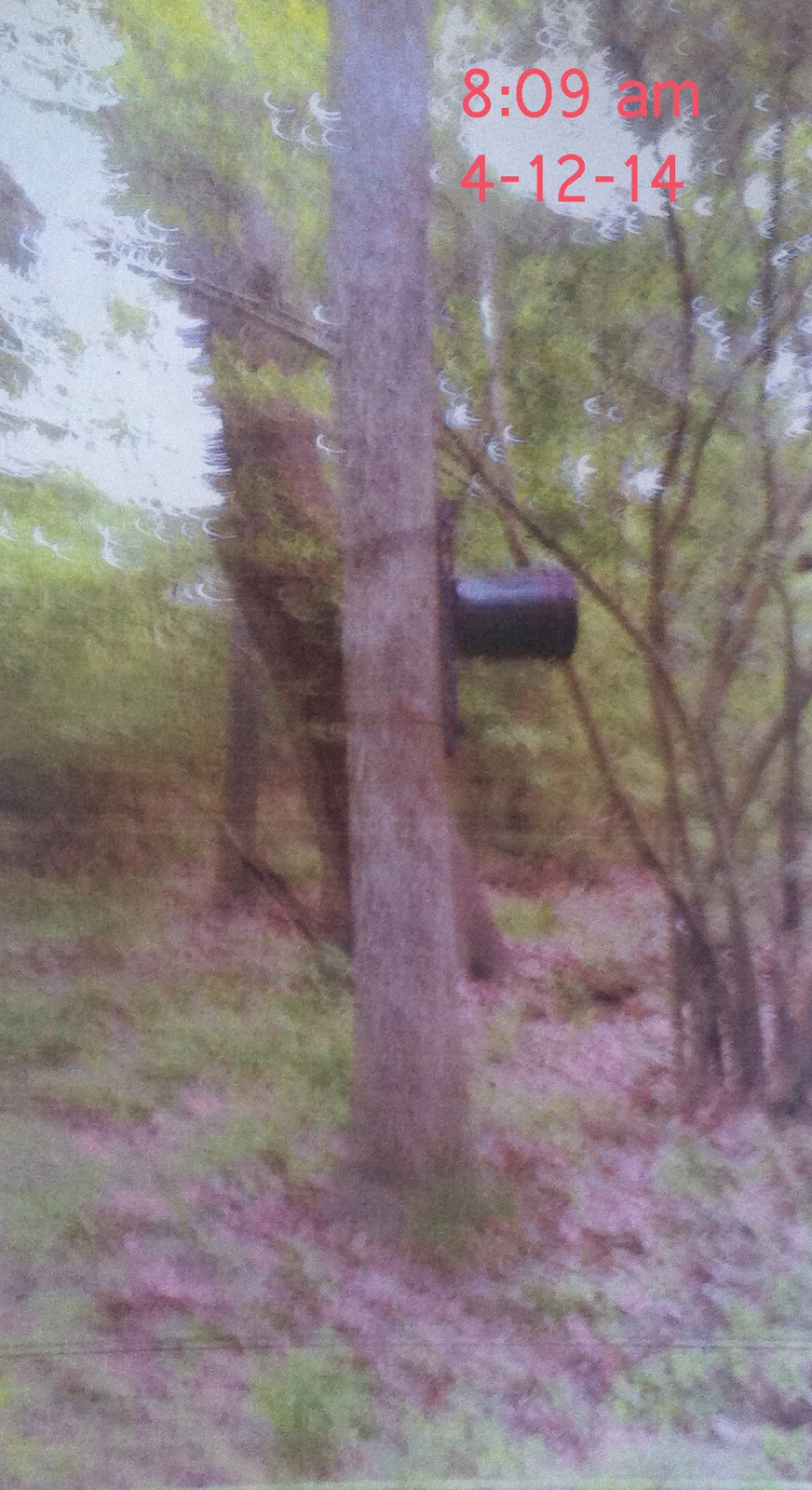 Jumping on my bike, I headed over to the right-of-way. At the second location, the northeast trail entry, my signature stack of sticks was still in place, not moved. I left it as it was. 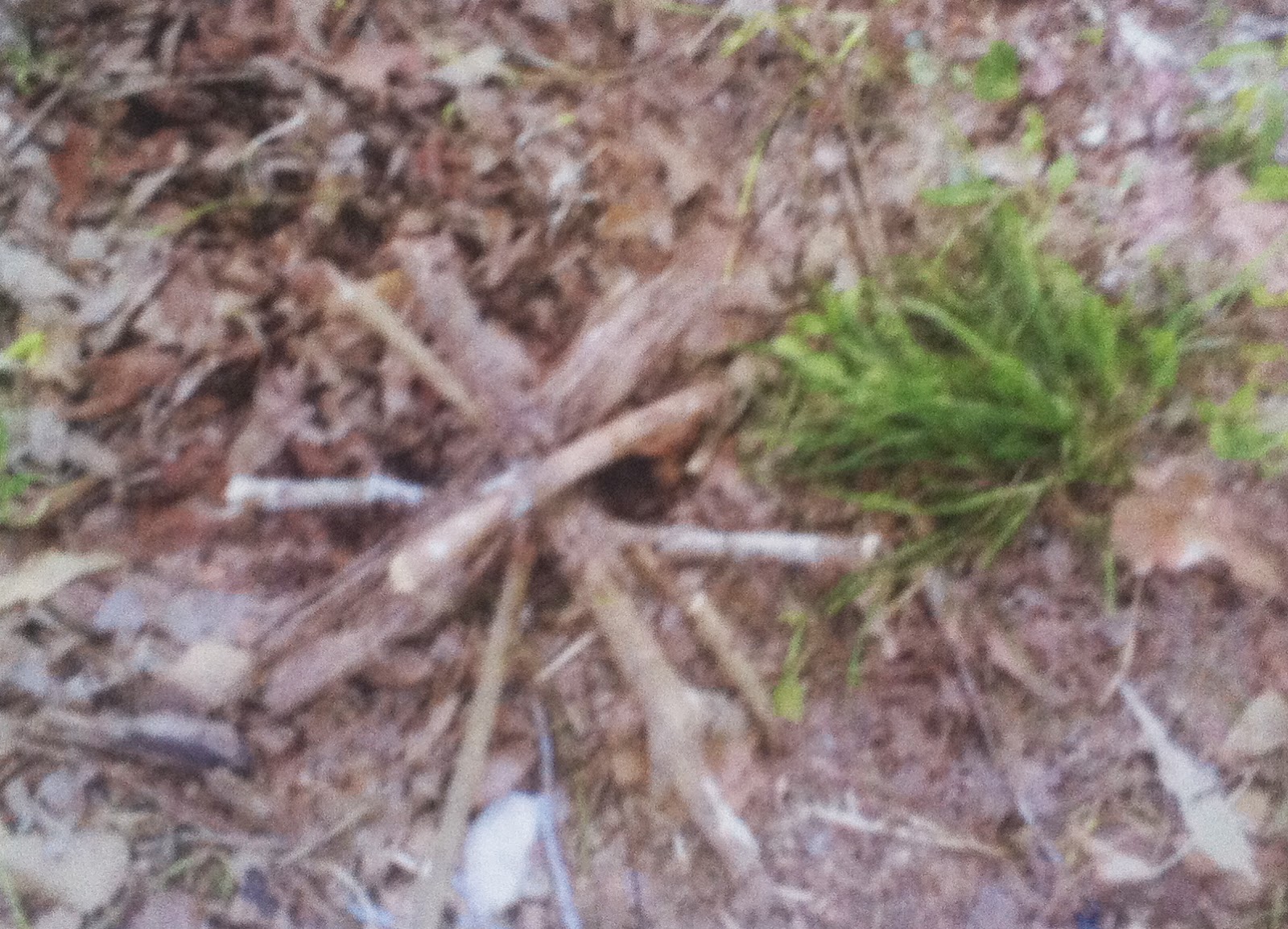 I then walked to the third location, where the three tree breaks were. Here, again, my signature stick stack was still in place and not moved. The log I had left standing at the two northwest tree breaks was now on the ground. 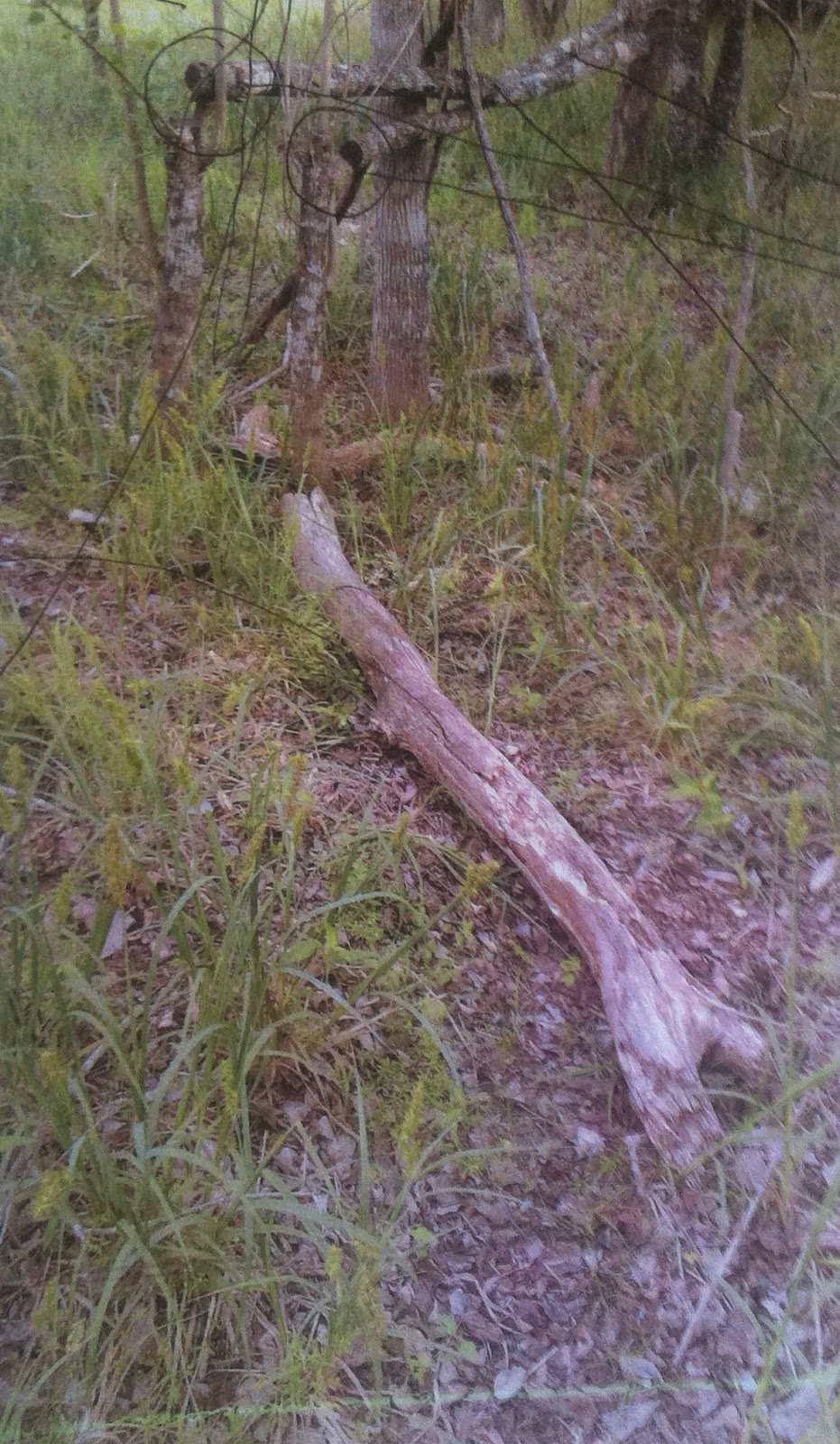 The other limb items were still standing also. I made another formation set-up using the downed log and other sticks, limbs at the double tree break. 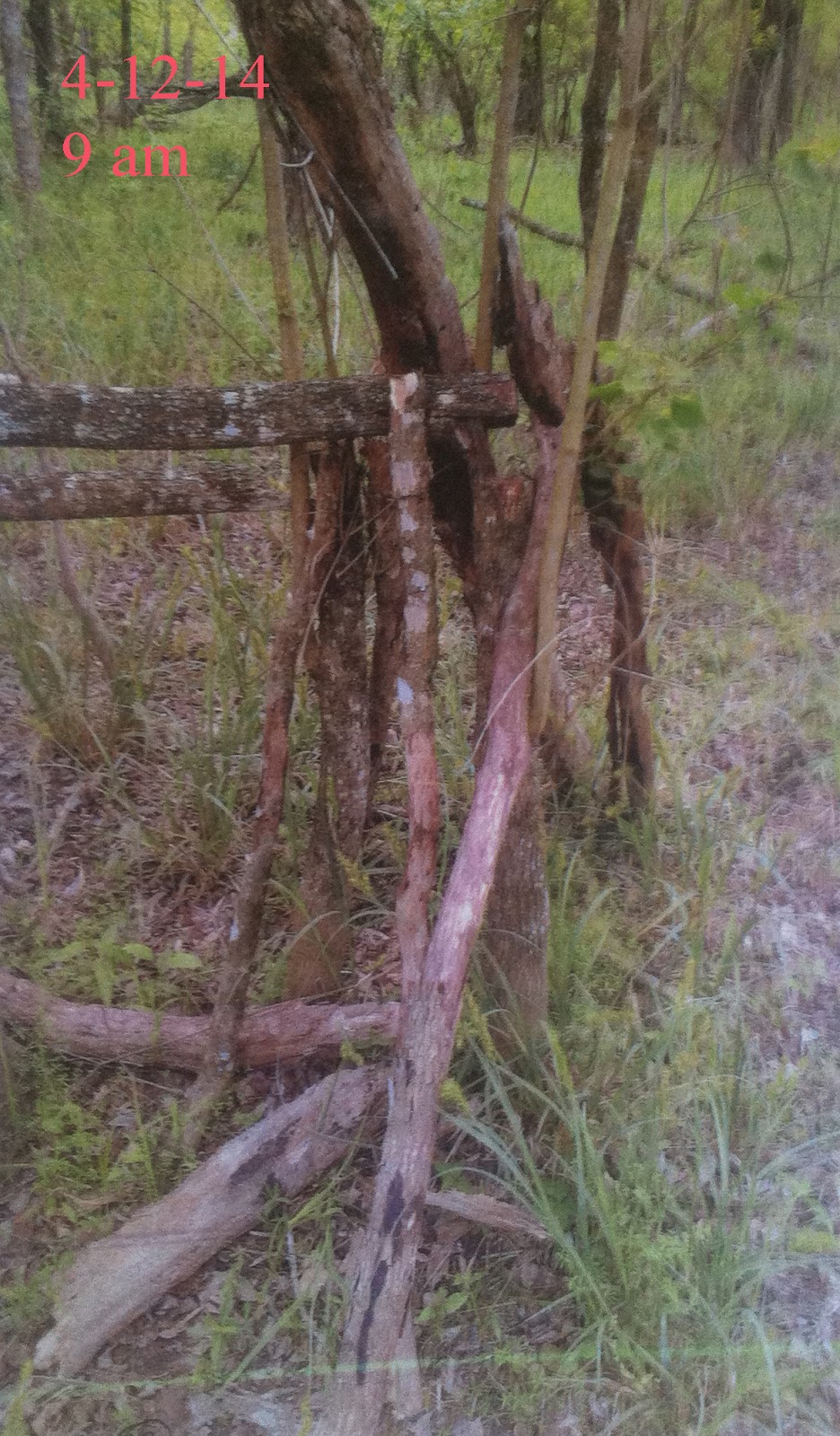 I continued biking the trail and went back to the tires location. I moved the tires to an open area inside the tree line next to the trail. I found another tire with the rim intact and now had a total of 4 in the location. The new set-up had 4 tires plus all the other items around the tires. I brought a large limb plus 2 branches to put across the trail entry. 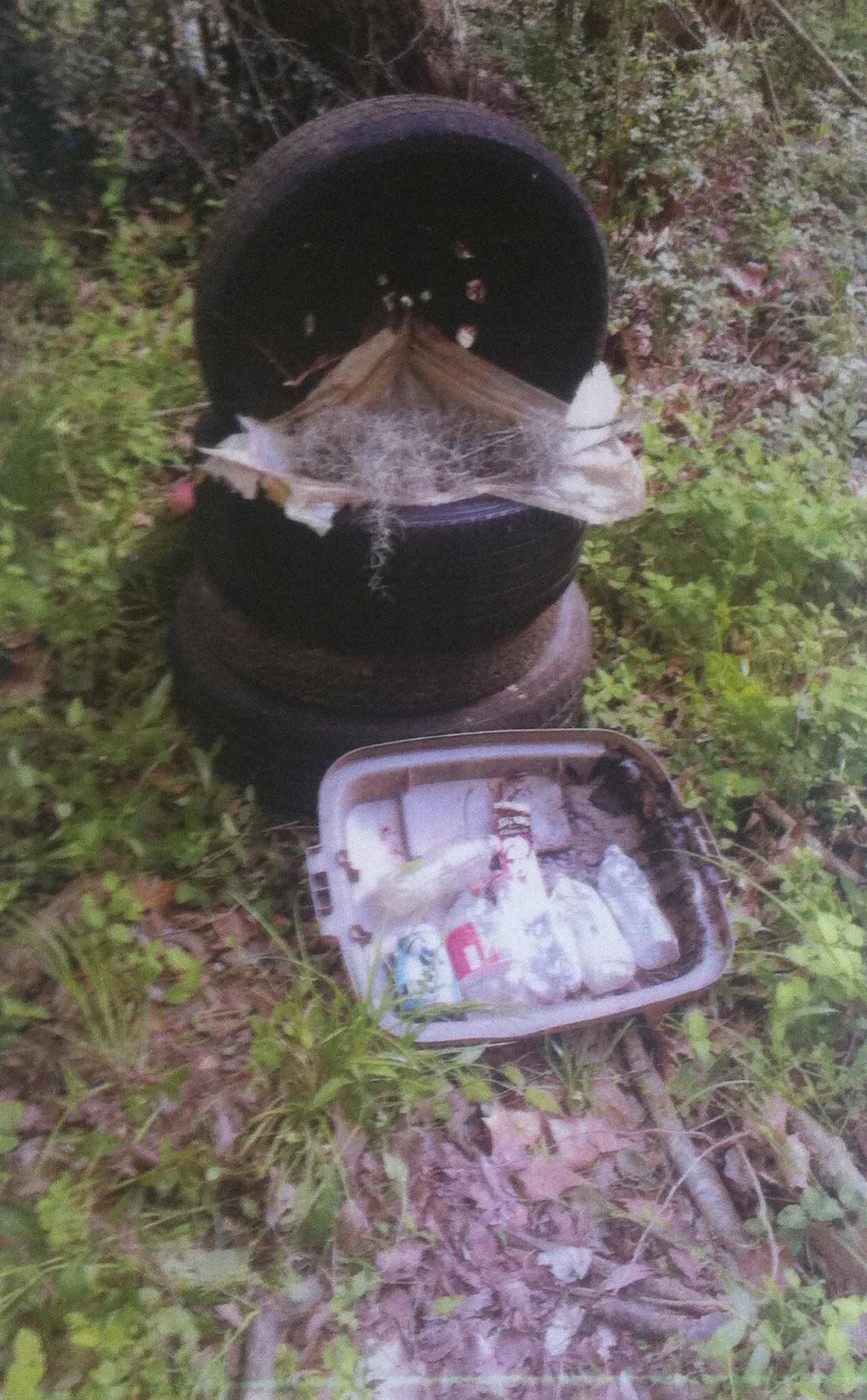 I then decided to gather the cotton I had noticed earlier in the grassy area. The grass was 8-10 inches high. 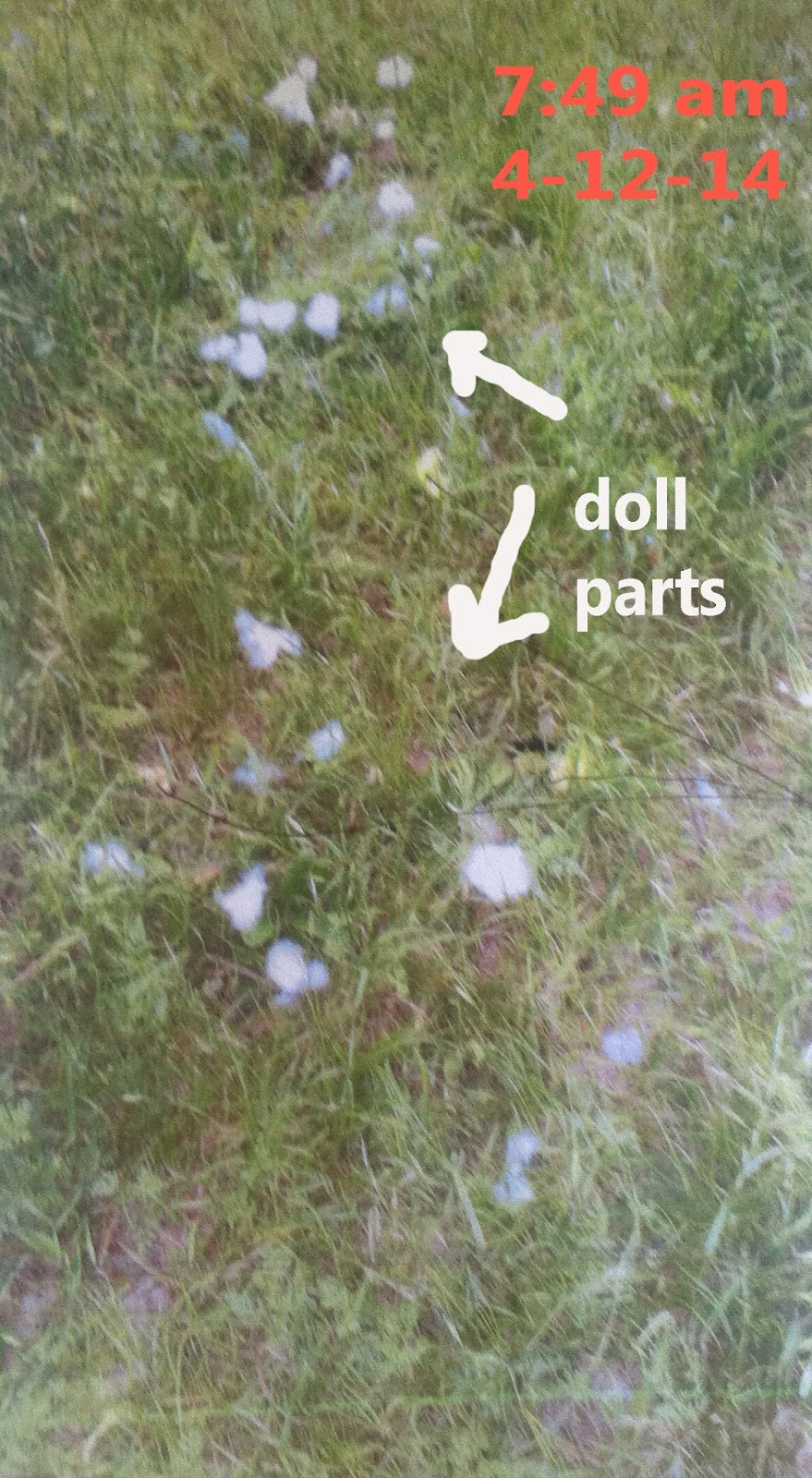 As I gathered the cotton, I noticed fabric pieces down at the bottom of the grass. I had found the remains of the bumble bee stuffed animal. It had been torn to pieces, shredded! I gathered the doll remains and took a photograph. It was bagged for further consideration. Why was this small doll not welcome at the site? Aggression? Hostility? Did they think something was inside it?

The mystery of their behavior and motivations is once again an elusive thing for me.

Then, I decided I was coming back in just a few days and at a different time of day, closer to dusk. The location needed more frequent observation, it seemed. I didn't want to make whoever was interacting with me, give up and move on. Still, in the back of my mind, I had to wonder, just who was I interacting with?