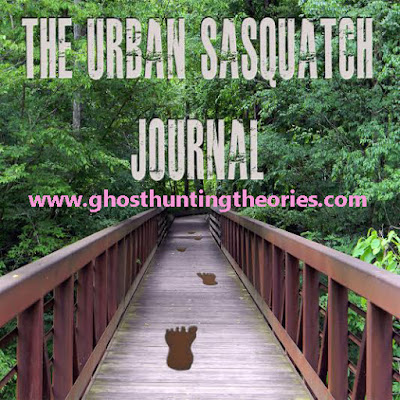 3:45 PM:  Arrival to east side grassy ditch area. 81 degrees and cloudy. Both sides of the ditch grassy areas to the south have been recently mowed. The old fire pit on the way to the site is still intact except for the stones I removed last year. The jug of water is still upright by a small tree nearby. Everything as is for over the past year. There have been many rains and storms in the area since last September. More flooding may have occurred in my absence.

I entered site 1A on the east side of the ditch at the old entry point near the broken over cedar tree. Items I had collected; the balls, plastic lids, are still scattered over the area. The blue tire is still there. I decided to move the blue tire to site 1B and put it on the red tire.

At site 1B, I had hung 3 deer bones from a limb in October. Two of the bones were removed from the strings and on the ground below. I rehung the bones and tightened the strings.

In October, I had filled 2 old, small, backpacks with the balls from site 1A to move to this location. I left the balls in the 2 packs hanging from several trees. Today, I made a small wooden corral 3' x 4' of limbs and branches. I removed the balls from the packs and put them into the rectangular corral.

I now have moved both buckets to the Site 1B. Both are approximately 7' off the ground to the openings. I have restacked four of the tires on the ground and wedged one tire up in a tree. On one of the ground tires I left a granola bar and one long 6" galvanized nail. I started to take photos, but the camera is not functioning properly. In the future, I plan to bring the camcorder and use it exclusively. There are a lot of mosquitoes out already. I left the area around 5 PM.

Future trips will see me moving more balls, plastic items, hanging bottles, stones, etc. to site 1B. Last year, in the early fall, I was going to clean up the trash/rooting areas. I was carrying trash out. I have now changed my mind and am leaving things as they are.

I made the decision this afternoon to go the interaction site. I began to get an excitement about going there. As I hiked in I was getting fired up.
This always gets my adrenalin going.

5:05 PM:  Arrival to east side grassy ditch area. I always stop at the old fire pit site on my way in. This time I had a surprise. The water jug was now turned over behind the small tree it has been upright near. The cap was still on tight and none had spilled out. I left as is. 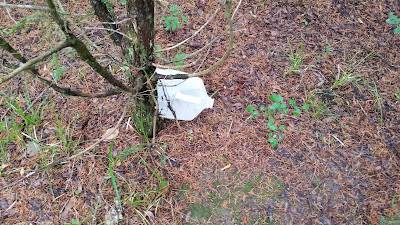 I moved on down the grassy area and it has not been mowed. The grass is 8"-10" tall. As I approached the old site 1A entry spot, there were many logs, branches and limbs outside the old entry in the grassy area. It looked just like those last year, I would find as if to block movement, a large, loud, tractor mowing bush hog. Last year, those mowing seemed to move the logs, branches, limbs, etc. back to the tree line so the mowing could be continued.

Another item, that looked unusual, was near the north creek bank where the ditch and creek merge. I found 2 long limbs in the shape of a direction pointer and a tall tree that is broken at the bottom and leaning against another. Both could be from the rains or storms. I always note what I see as unusual in relation to the surrounding terrain, etc. I did not video the items mentioned. I will on the next visit, if they are still intact. 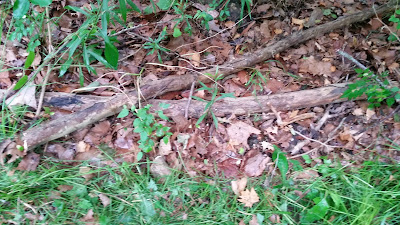 I walked north back up the grassy area from the creek. I entered the site 1B area not knowing what to expect. But, I always expect something to have taken place. I was not to be disappointed this time out.

Things I noticed:
1) The granola bar and 6" nail was not seen.
2) One of the 3 bones was removed from the limb string and on the ground below.
3) The yellow tire that had been wedged into a tree was now on the ground.
4) The formation of 4 tires had been bumped over.
5) The limbs laid out as a possible path to the bones ??? Wow, I don't know what to think about the limbs as a path.
*All of the above was documented on video.

New changes I did:
1) I wedged all 5 tires into trees.
2) On one of the tires, I draped a t-shirt over and put a cap on top.
3) I moved the 3 bones to hang from metal bucket carrier wire piece on food bucket #1, on food bucket #2, and hung the antlers from the metal bucket carrier wire piece.
4) I put the 2 gift (?) feathers at the back of food bucket #2 and 2"x4" wood stud attachment.
5) In food bucket #1, I placed: 1 bag of unshelled peanuts, a granola bar, 1 small bag of deer corn, 1 small bag of semi-sweet chocolate pieces.
6) In food bucket #2 I put: 1 bag of unshelled peanuts, a granola bar and 1 small bag of deer corn.
7) From site 1A, I brought more balls that are scattered from past rains and flooding over to the site 1B balls corral. I also brought 1 plastic garbage lid over. I may use the plastic lids etc., to make a path to a gift exchange location.

I want to see what kind of exchanges can take place. I may purchase different kinds and sizes of marbles and rock crystals to leave and see what happens. I do have a game camera to use for the future. I will not set it up until I'm sure I have established another consistent pattern of some type of interaction. actually, I will probably purchase 2 more cameras.

**Tomorrow's post is a new installment of "The Stalker Between the Worlds."**