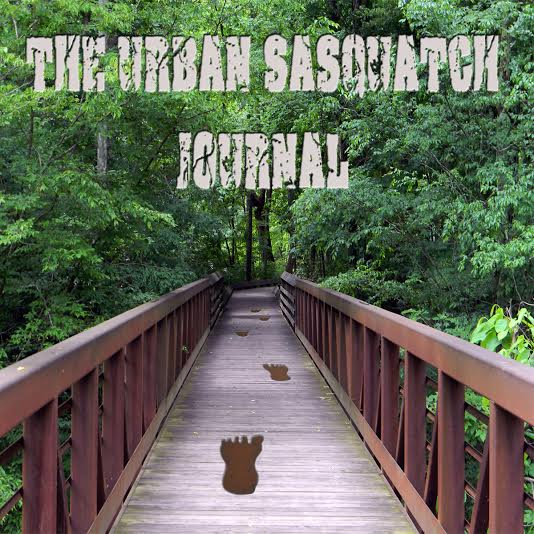 I arrived at area #1 at approximately 6:20 p.m.  I had walked the grassy area and came to the tree near the ditch outside the trail entry opening. Next to the tree was the 2-limb arrow directional pointer. I again found another feather inside the pointer, close to where the points come together. 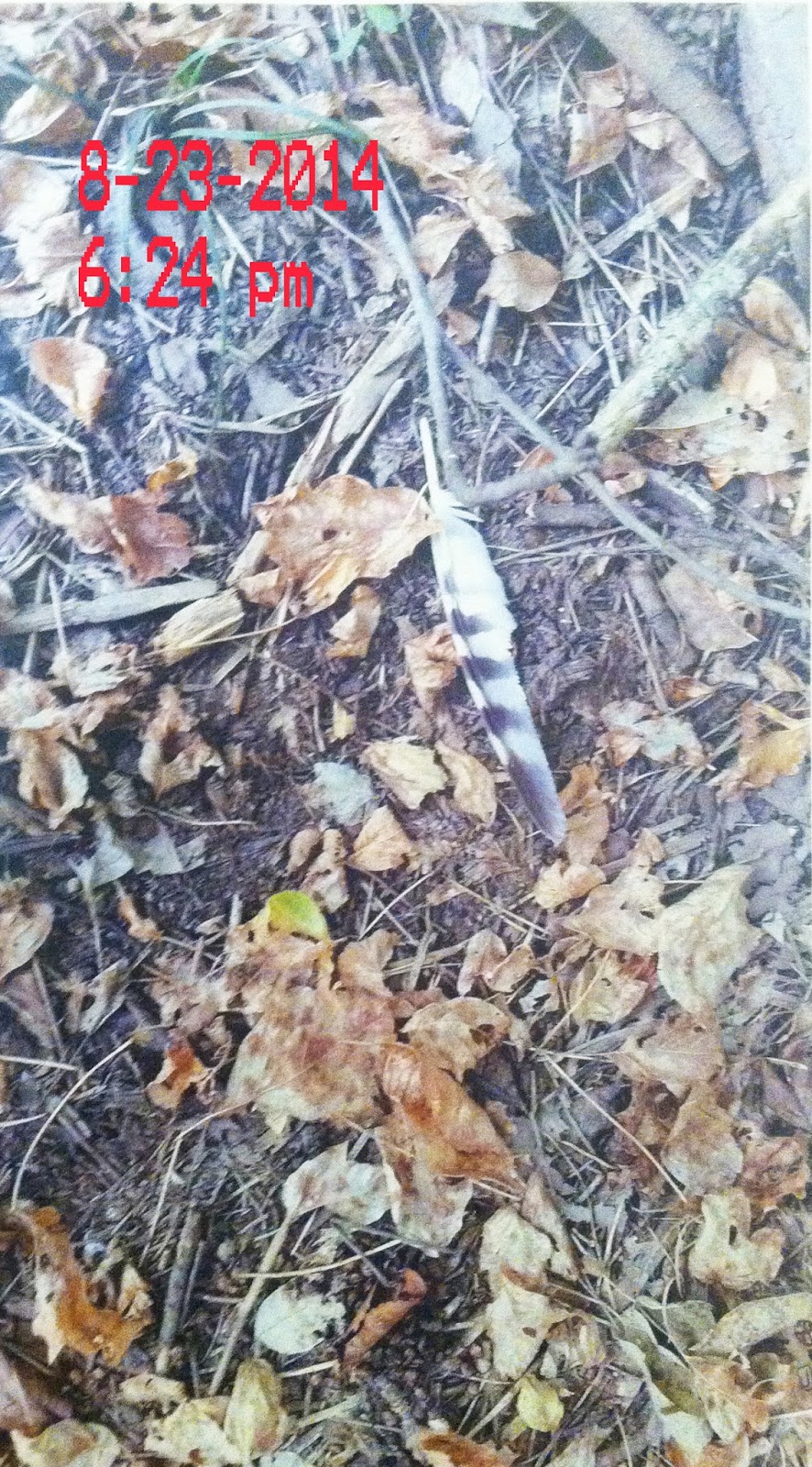 The first feather observed a while back at the same spot, I did not retrieve. This feather, I took and put near the antlers on a small tree. I tied the antlers to the small tree with a long shoe string. I stuck the feather tip under the shoe string next to the antlers. I hoped this would be a show of respect for what was left and found by me. 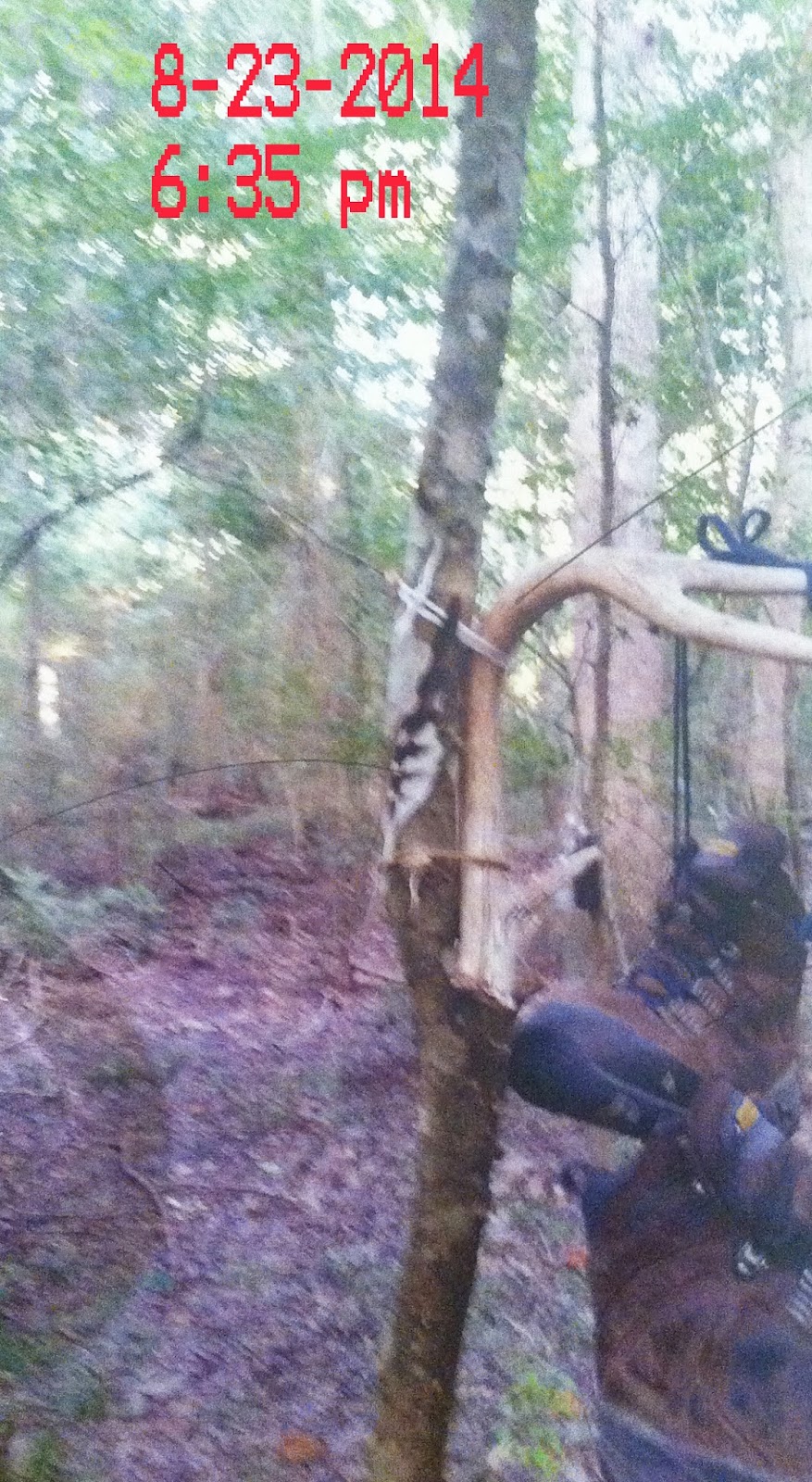 After seeing the feather and picking it up to move it, I went into the woods to the set-ups area. The following was observed:

1.  At bucket #1, all the food items including the sweet treats were taken.

2.  The wrappers were on the ground near the bucket tree. 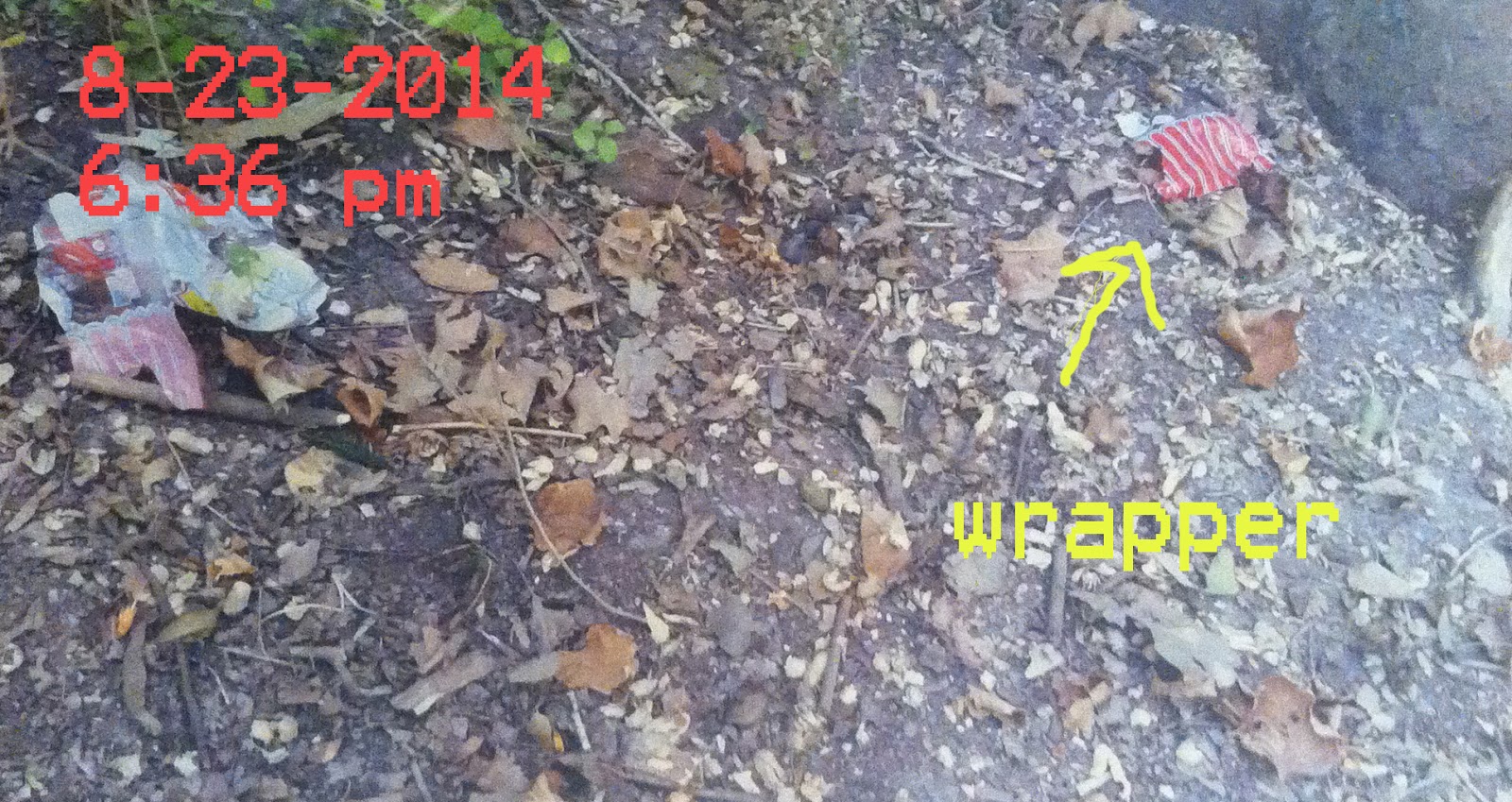 3.  The balls, at the various groupings near the 2 logs, have been messed with; was it Sasquatch? Hogs? Deer? Other? 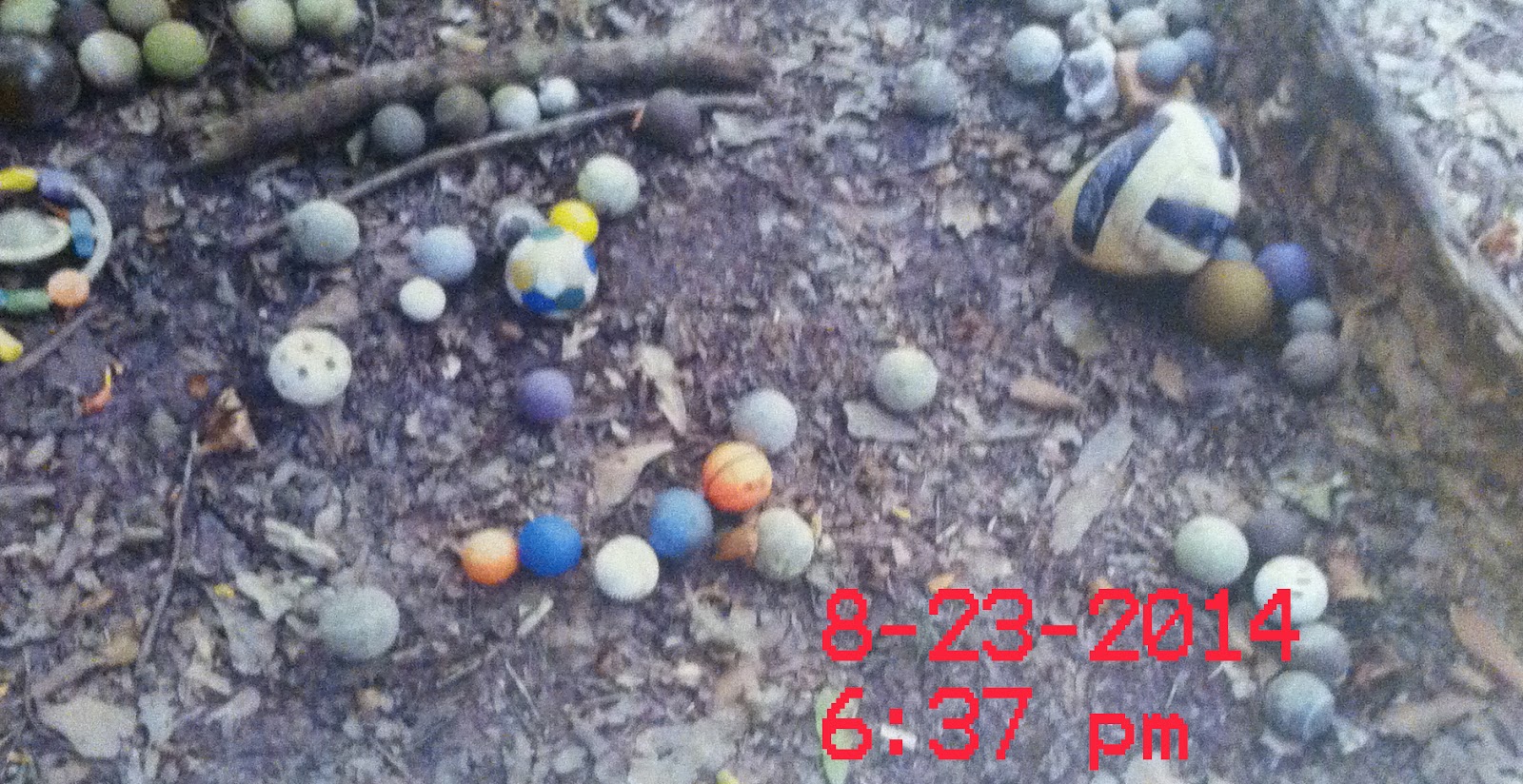 4.  At the rock circle, more of the rocks are now inside the ring of rocks.

5.  At the 3 plastic bottles on sticks set-up, several bottles and sticks are now on the ground. 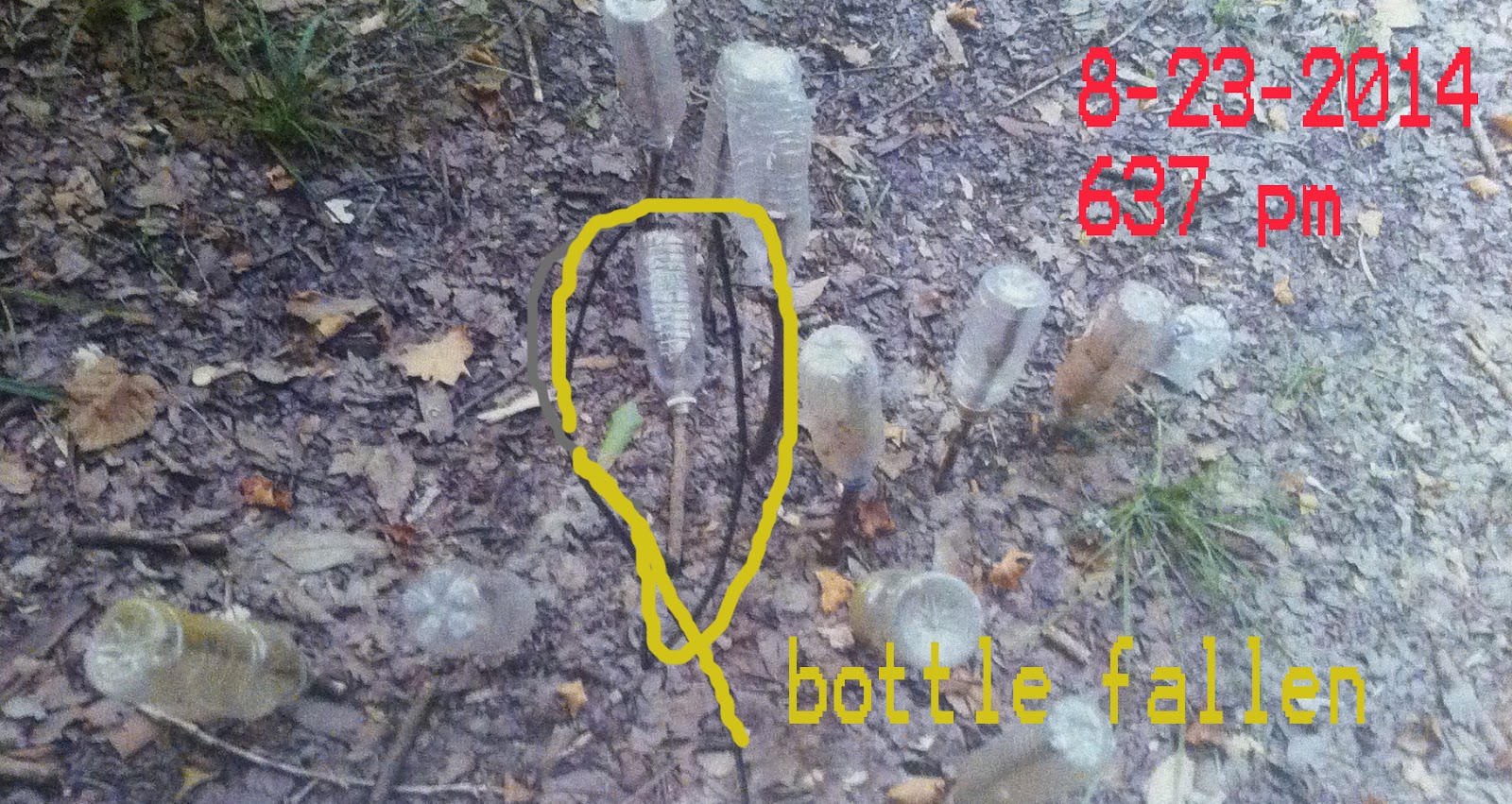 I re-stocked the food bucket #1 with 4 items: 3 sweet treats, 1 bag of unshelled peanuts. The tires are still in the same formation. The 3 plastic garbage can lids are still laid out as was.  None of the 3 lids were moved.

At the gifting rack at big tree #2, nothing was taken.  Hanging on the rack were the following: 2 youth backpacks, 1 hair brush, 1 fabric grocery bag, a frog doll, a toy flute, a metal clamp.  I decided to leave 2 sweet treats on the rack. One sweet treat was clamped to the rack, the other sweet treat was left on the rack. I did this to make sure the items were observed at least.

At food bucket #2, two items were taken and 2 items left on the ground. The apple pie treat had one bite taken from it and was still in wrapper on the ground. Next, was one unopened, small cinnamon roll on the ground. I left in the bucket, 1 donut treat and 1 bag of unshelled peanuts. I took the unopened cinnamon roll sweet treat back to bucket #1 and added it there.

As I was back near the big tree #1, I noticed a peanut butter jar lid on the ground just west of the tree. I took a photo. 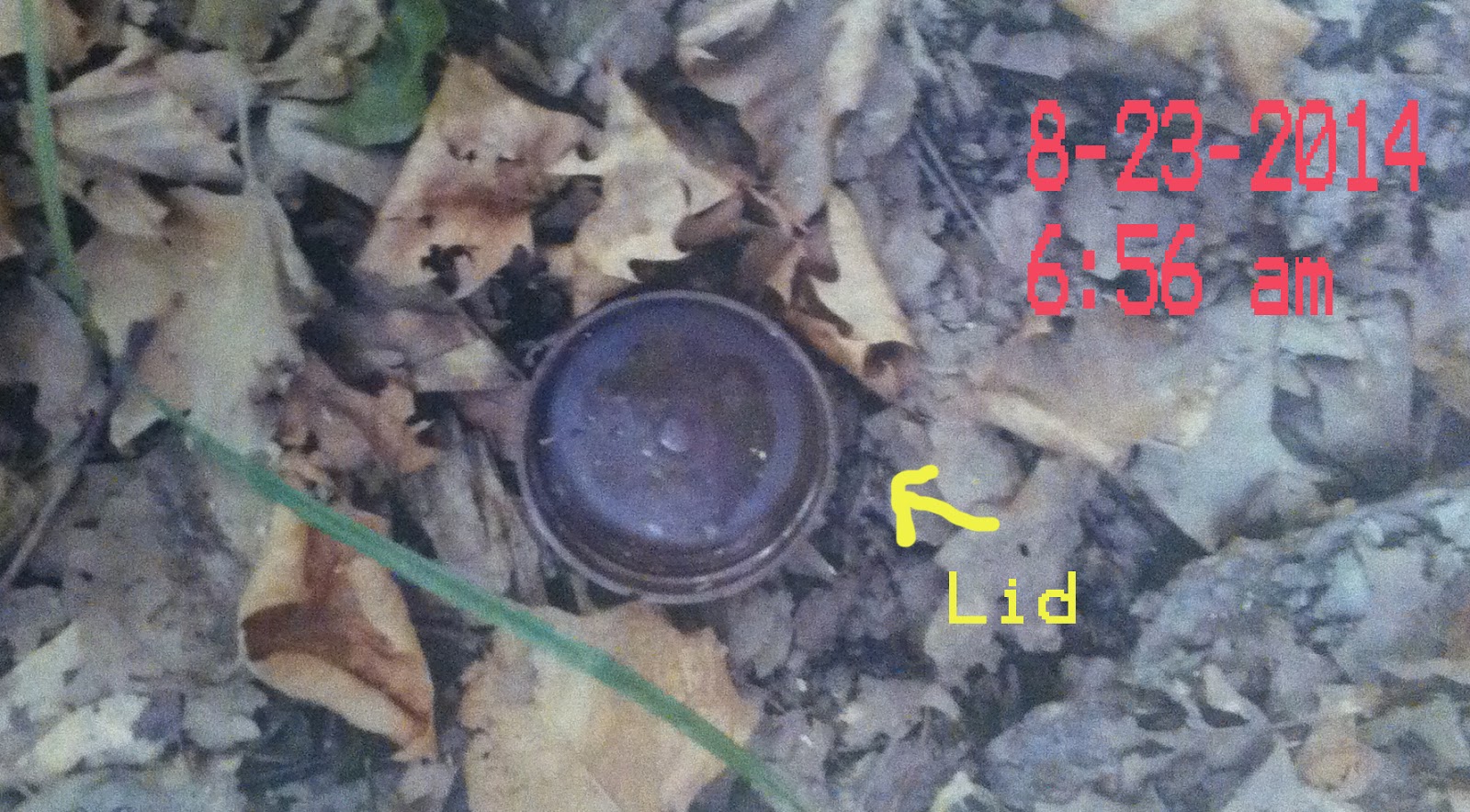 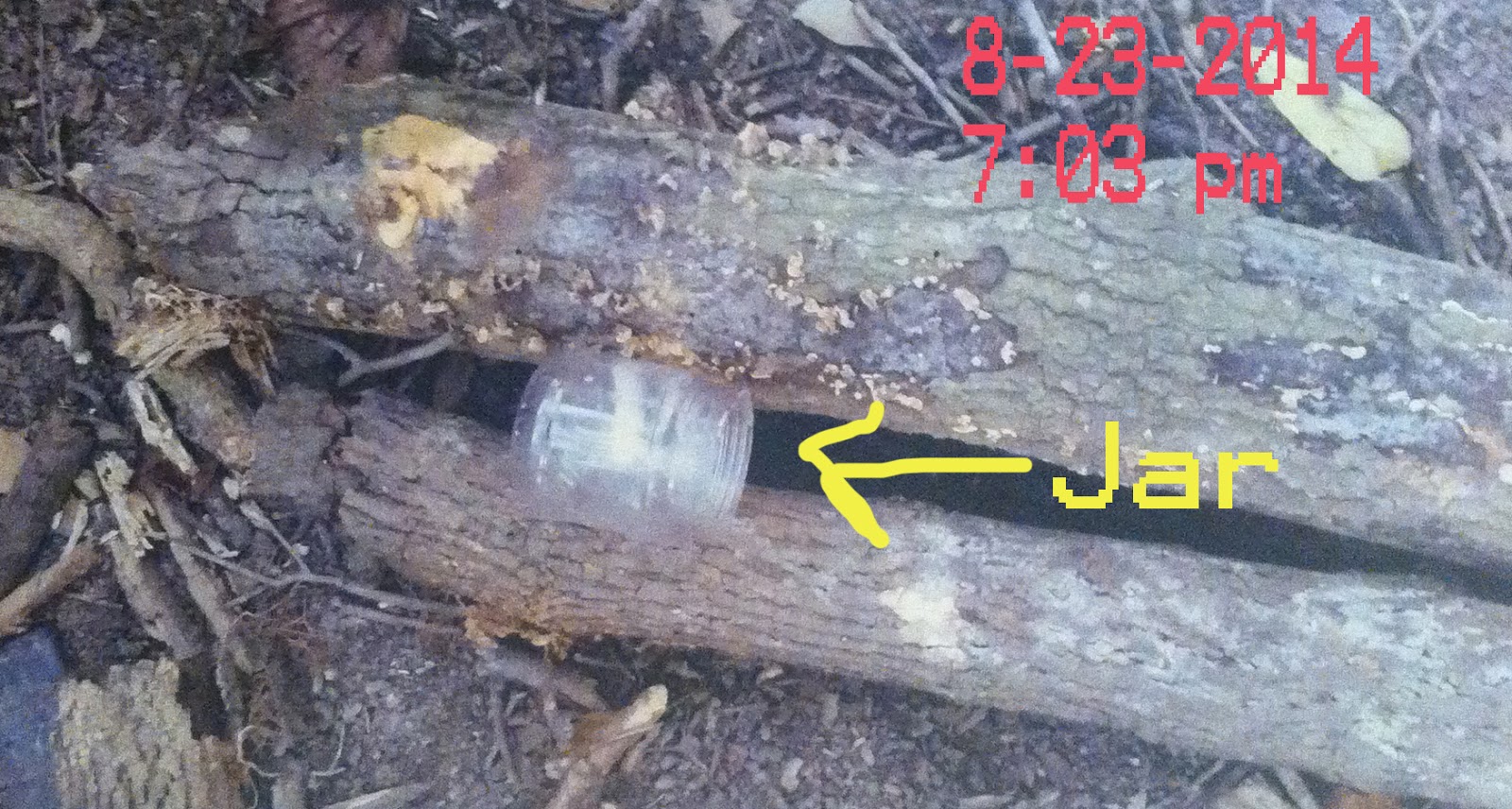 (A little unsettling and surprising, I had hoped the jar would be left where I could find it and there it was, where I hoped to find it just east of the Big Tree #1.)

I put up 6 more bottles as chimes, using various shoe strings, strings, leather pieces, poncho pieces as attachment to the trees around the site. These were put up in 2 groups of 3 on the west side of the site.

At around 7:30 p.m. I saw a large hog roaming through the area approximately 25 yards west of me. I decided to leave the area pronto. I decided to do something soon to allow me to move quickly onto the crook of big tree #2. This was approximately 7 feet off the ground. This would allow me to video or take photos of hogs, deer, while staying in the immediate area and not be aggressively approached.

1.  The full small trash bag left at the last visit when a hog came into the site, was torn and the contents scattered over the immediate area. 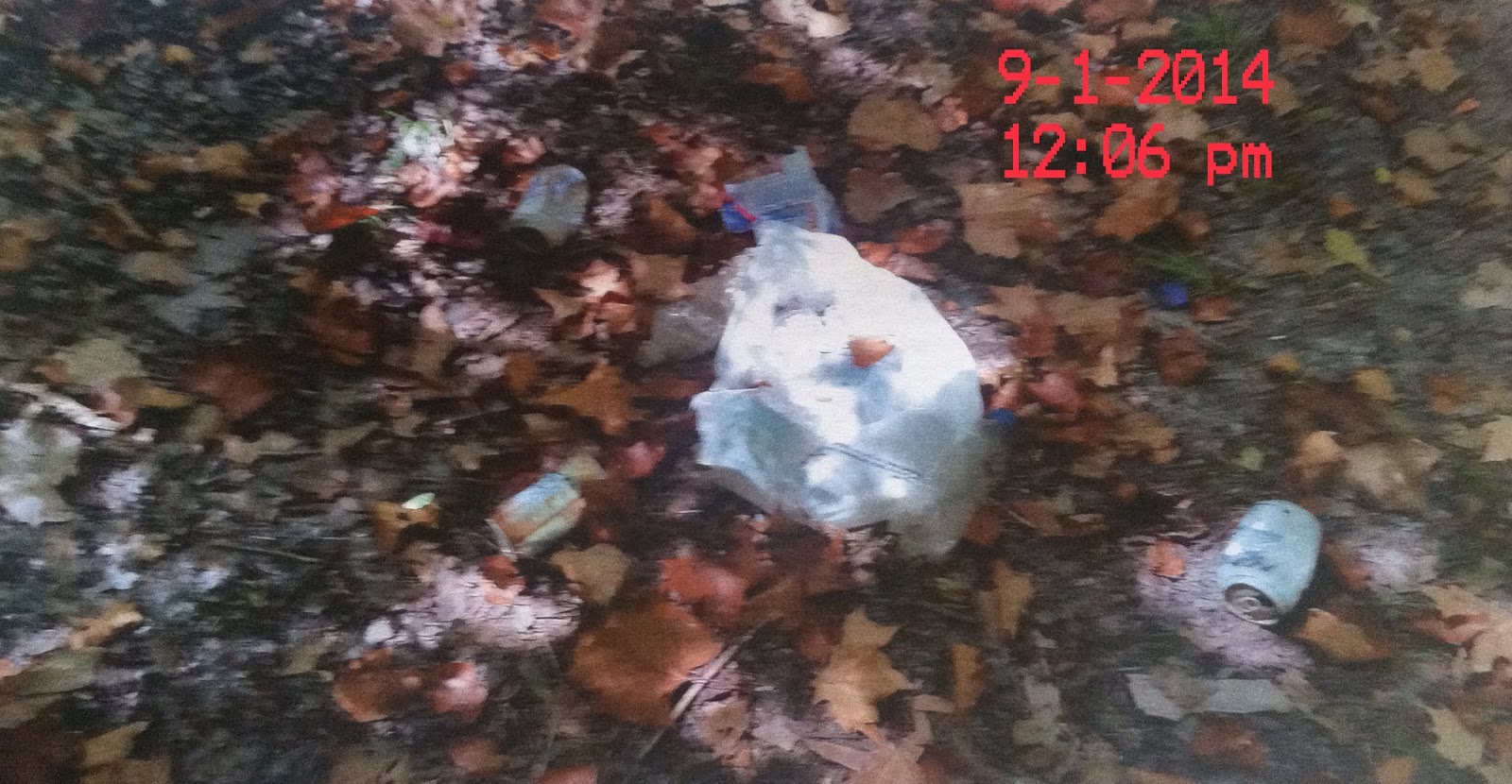 2.  Heavy leaf clutter was over the site.

3.  The rock circle had 7 rocks inside the ring and 1 outside.

4.  Bucket #1 measures 6 feet 10 inches off the ground to the actual opening. I had cut a partial lid and attached to keep from falling out of the 2 buckets. The opening is to the top of the partial lead. The food was gone. The plastic bottled water container on the ground was empty with the lid on??? It was not flattened.

5.  Some of the balls have been moved around: Sasquatch? Hogs? Deer? Other??? 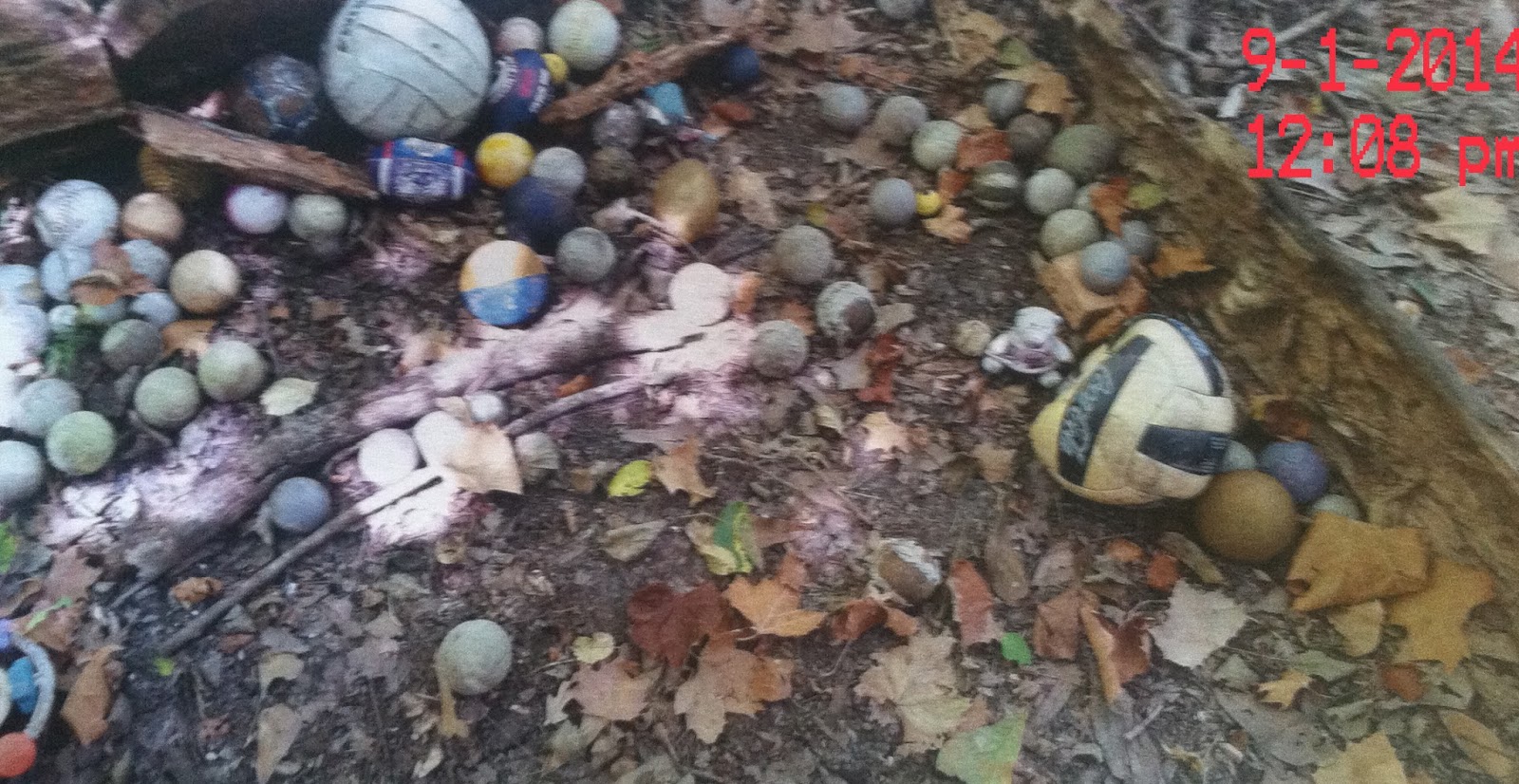 6.  I didn't recall having moved the old rusty metal container to the base of the antler/feather tree, but that's where it was.

On the south side of the tires setup, it looked like a possible ground/limbs/stick communication formation. If it was communication, I did not understand the meaning. Also, the 2 inch x 4 inch wood arrow pointer set up by me was now angled off.  Actually, it looked in line with one of the limbs/sticks in the ground layout. 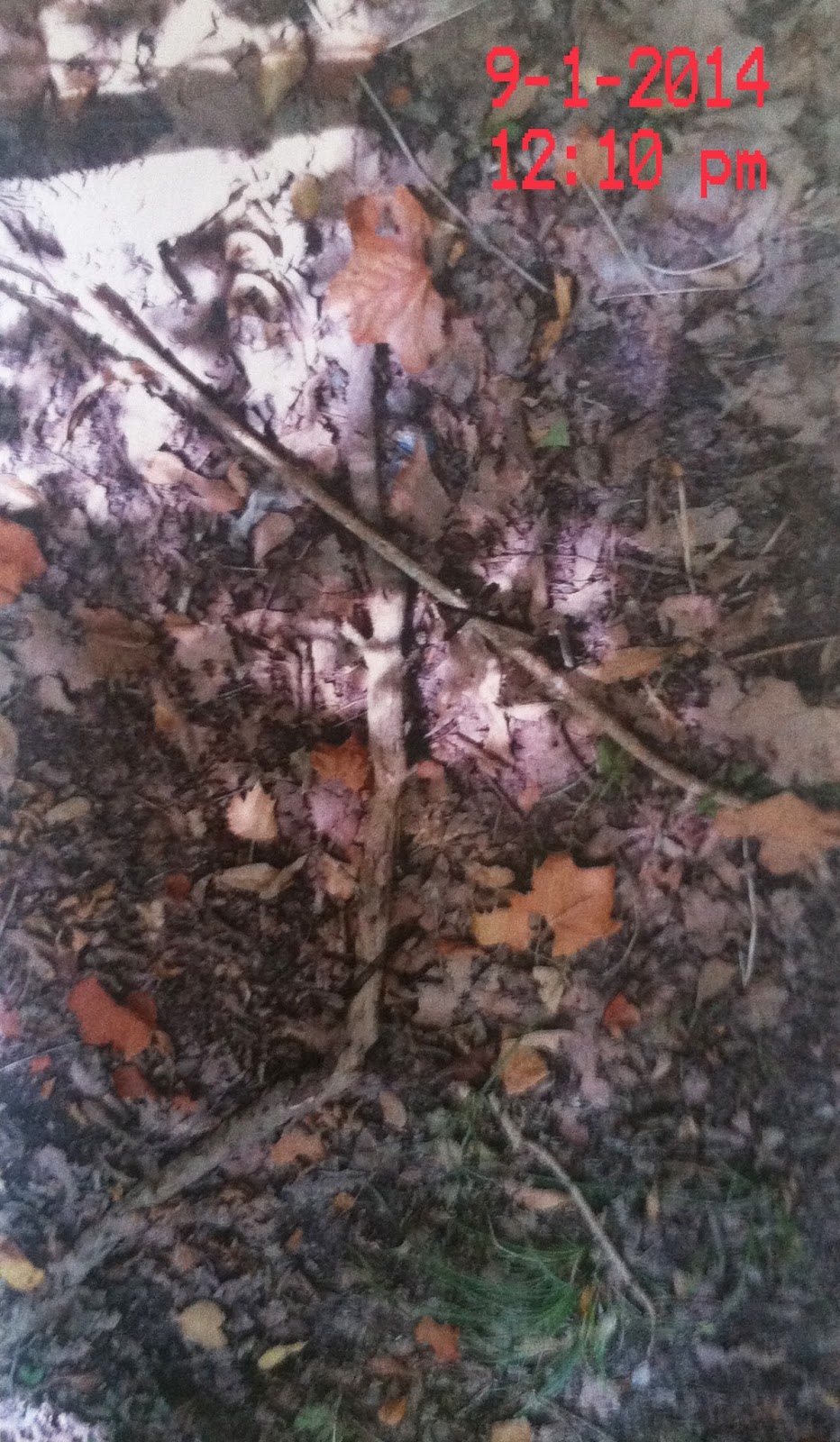 At big tree #2, which was the gifting rack, none of the main, practical gifting items have been taken. The 2 sweet treats I left on the rack and one of those I attached to the rack with the metal camp. Both treats were eaten and wrappers on the ground at the base of the tree. The one treat wrapper still had the metal clamp attached.

At food bucket #2, the measurement from the ground to the partial led opening is 7 feet. Here, the sweet treats were taken and the empty wrappers were on the ground close by.

I decided to change the site. I began to move the balls and toys from near the 2 logs. Under the toys, I found a feather I had not noticed before. I added the feather to the antler tree. Now, I have 2 feathers on the tree. 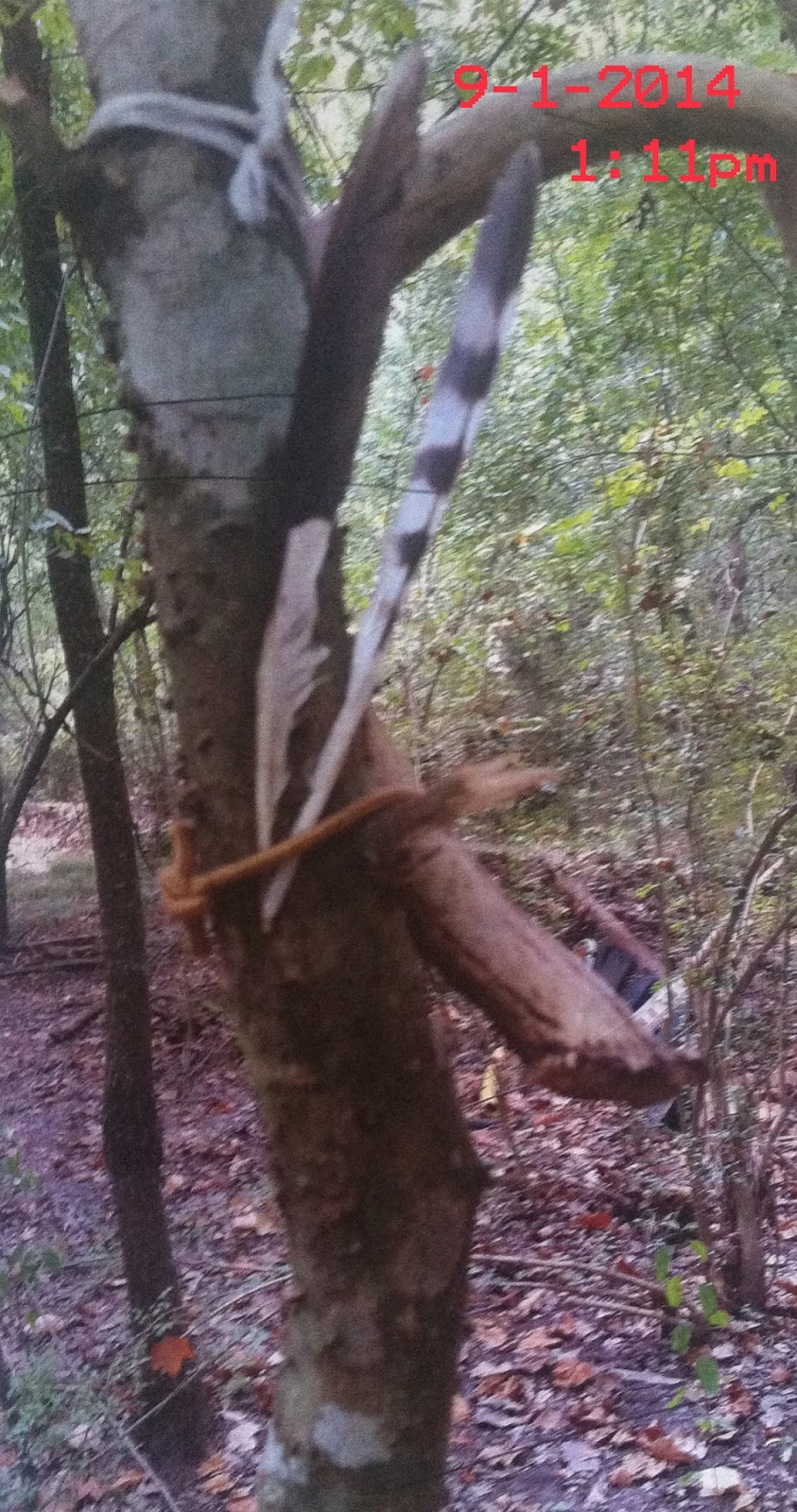 New things I accomplished this visit:

1.  Used the back of the blue lettered sign as a drawing board with the felt marker. 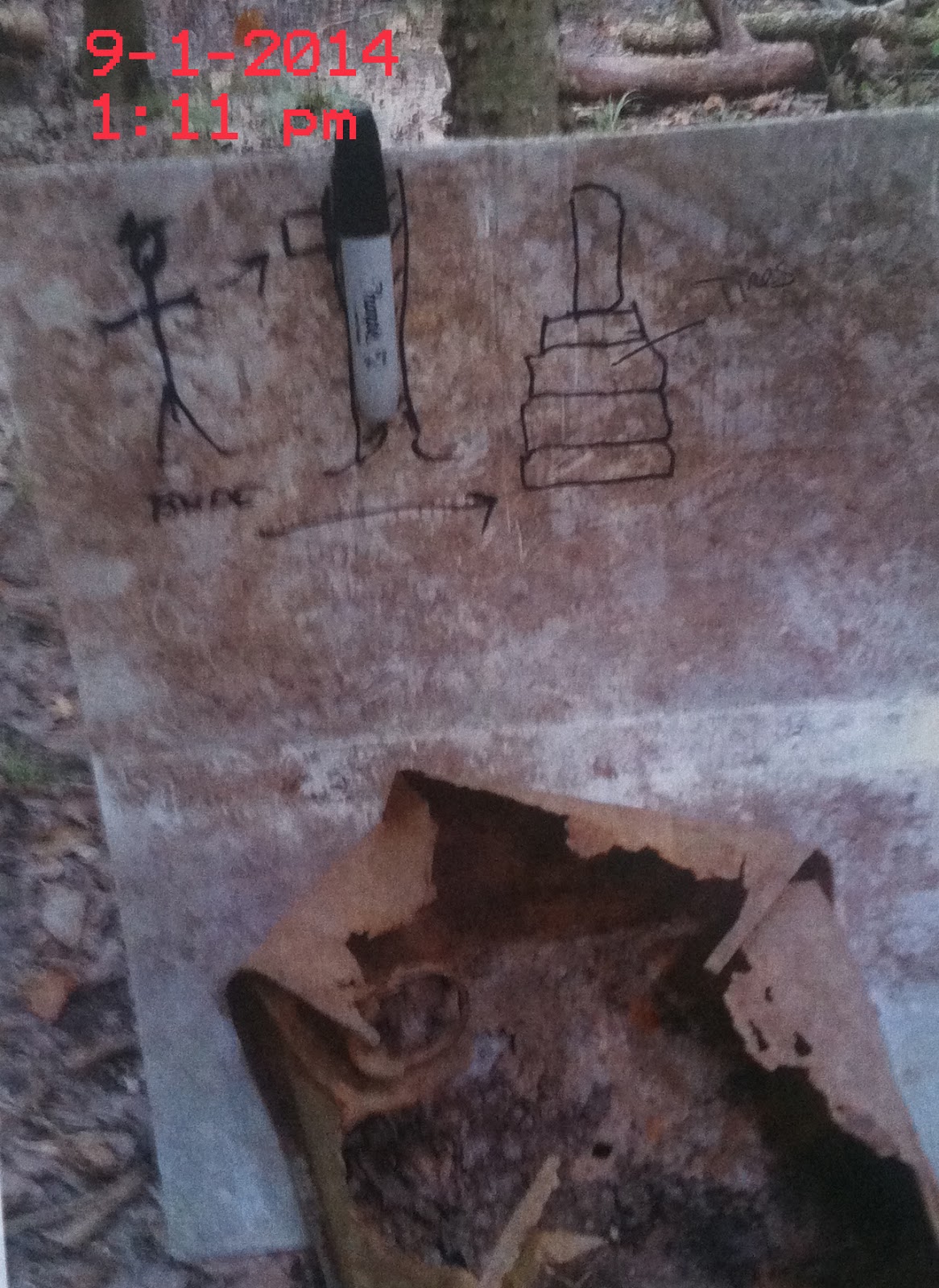 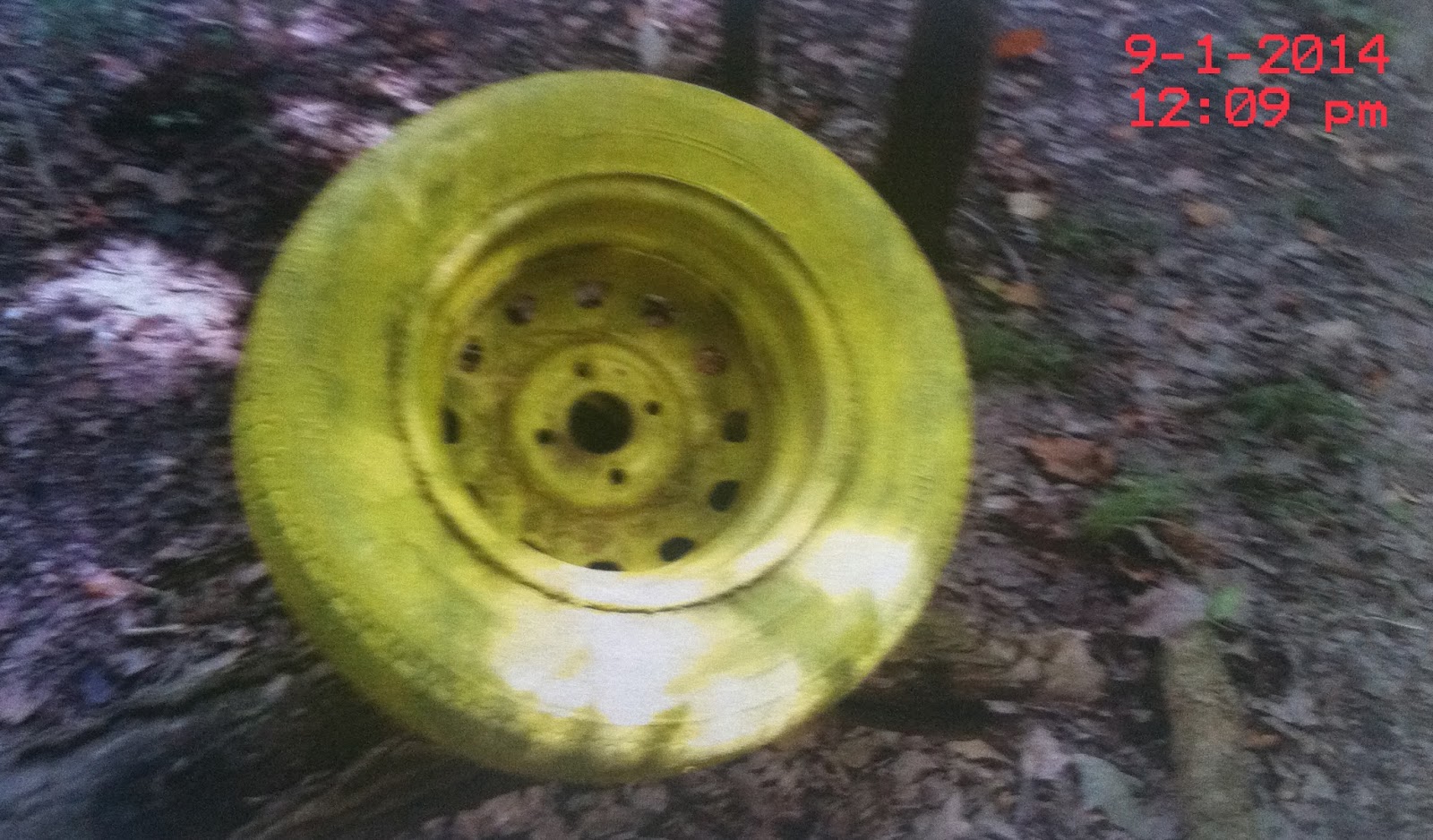 3.  Two of the log/limbs laid out as a cross formation, I painted yellow markings on the limbs. 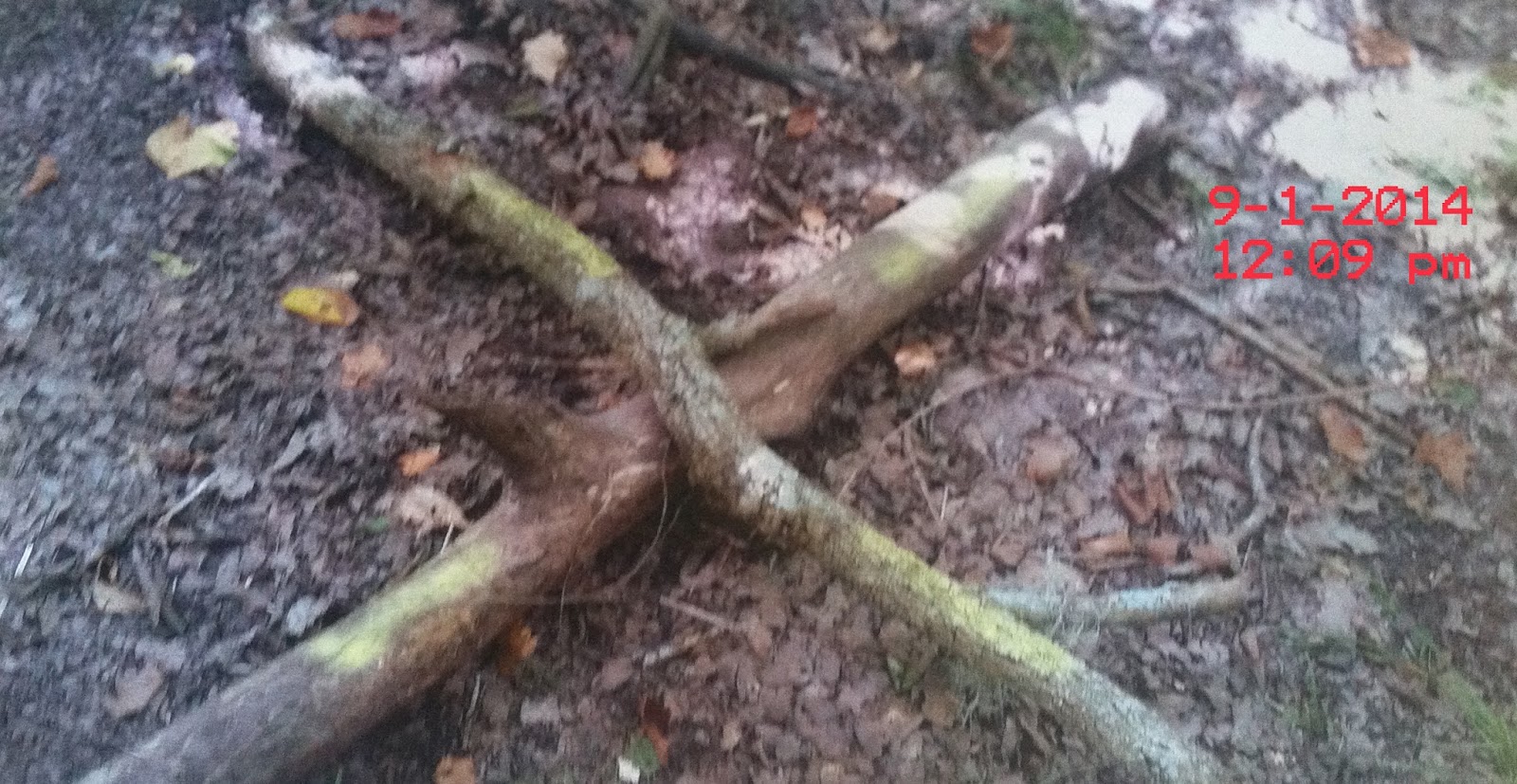 4.  I rearranged the plastic lid covers, etc, on the log.

5.  I removed the backpacks and other gift items, except the hair brush from the gifting rack.

6.  Started nailing the wooden 2 x 4 x19 inches in length wooden ladder steps to the big tree #2 to get up to the crook of the tree at about 7 feet up.

Today, being a holiday, I thought I would spend the day at area #1.  I had a lot to do.  After 2 hours in the heat and humidity, I was wiped out. I consumed 64 ounces of water and decided to leave. Also, earlier, a small hog and deer had come close by the site. Once I was noticed, both left the area heading east. I made it back to the parking area by 1:30 p.m. I was exhausted and soaked.

I felt as if I had gotten a lot in place and ready for me to be able to safely observe up in the tree where it was removed and quiet. I knew someone was taking the food and someone was leaving markers and feathers. The placement was simply too repeated to be by accident.

Still, from my perch, I might be able to learn more about what trafficked the area.