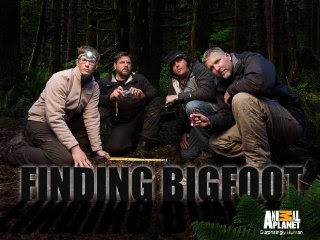 Some of y'all are new to my LAUGH series. See the tab at the top that says "LAUGH Comedy Series." I make loving fun of all the paranormal shows.

Today, I decided that I am so in love with the show "Finding Bigfoot" that it begs to be poked fun at by an adoring fan.

(In the woods in the Cascades in Washington State, the team gathers in the darkened forest to look for the elusive Bigfoot creature reported by locals on the mountainside)

RANAE: Man, I'm really glad to be here in my home state on what might be a really awesome hunt.

Matt: (Turning to Cliff) Did you hear something?

Cliff: (prompts) You know, the female on the team. (seeing Matt's blank stare, he adds) The skeptic.

Bobo: What do you want us to do, huh?

Ranae: If these people said that the creature was as tall as that row of branches down the hillside, perhaps we should have Bobo go down there and wander around and see if we can get a height on this thing.

Matt: (elbows her) I am the leader, here. (thinks) Bobo, let's have you go down the hillside and stand in for Bigfoot, hmm?

(BoBo stomps off down the hillside)

Matt: No, Cliff, it's not time to do a Bigfoot call.

Cliff: (pouts and stomps his foot) I'm better at it in the shower. Or the car. Sometimes, I practice it in the grocery store. Well, back when they used to let me go there. Denny's and IHOP don't like me much either. I'm not welcome back at my grandma's house either. (frowns and shrugs) Come to think of it, my HOA isn't too happy. They came up with some rule on their books about Bigfoot calls.(mumbles)

(A screeching howl is sounded through the hillside, making the team startle)

Cliff: That was totally squatchy!

Ranae: Let's not lose our heads, now. It could have been a coyote or possibly a migrating owl from South America (thinks a moment) or a car passing by with a loud radio, an angry bear, a freak wind, or maybe someone with their foot stuck in an automatic door at the Starbucks down the hillside. Just because it's a loud sound in the woods doesn't make it Bigfoot.

(A repeated whooping howl is heard, making the team pivot back and forth, studying the blackened forest)

Matt: Do a Bigfoot call, Cliff!

Cliff: (cups his hands around his mouth and lets out a blood-curdling howl that resonates through the forest) Give me the Flir. (starts scanning the woods around them)

Ranae: Matt, what do you think? (turns to find Matt rushing off through the woods) What is he doing? He's not supposed to run off like that! This is totally unprofessional.

Cliff: (shrugs) He does that from time to time, Ranae. (whispers) His prostate.

(An ear-splitting howl sounds in the woods again. Cliff returns the call. The call is returned. Cliff screams out again until he's nearly hoarse.)

Matt: (returns) What the hell is all that whooping about?

Ranae: We're responding back and forth with something calling out in the woods.

Matt: (turns to Cliff) Cliff, what is happening?

Cliff: Like Ranae said, I'm calling back and forth with a squatch!

Cliff: (prompts) You know, the female on the team. The skeptic.

(whooping sounds in the woods again)

Matt: That's a Sasquatch! Didn't I tell you that everywhere I go, I run into him? It's like he's following me! (looks around him a bit paranoid) Just last night in Barnes and Noble, I swear that was him skirting the aisle of vegan cookbooks. And the other day, when I was taking the trash out, I think he was following me, probably sorting through my trash (trembling, wringing his hands) perhaps even learning more about me. Oh, God! I should have shredded my documents!

Ranae: (sighs and huffs) I think someone needs a vacation from squatch hunting.

Matt: Did you hear that? There's that damned voice again!

Ranae: (turns to Cliff as he opens his mouth and stops him) Just let him think it's the voices in his head, for God's sake.

Matt: (steps forward, cups his hands around his mouth) H-ello (he yells). Is anyone out there?

Deep unknown voice: (calls out from within the woods somewhere) Yes, I'm here!

Matt: Did you hear that? My theory that Bigfoot can be trained to speak is right! No one will ever doubt my legitimacy any longer. I will rule the scientific community as the man who taught Sasquatch to speak! Do you know what this means? I can make the speaking circuit for years to come, pump out a few books, have everyone adore me and look up to me. They'll name a national park after me! (raises his finger toward the sky in triumph) Why, I could get another season of my show!

Deep unknown voice: Are you still there?

Matt: (pushes everyone aside and yells out) I'm here! Why are you doing it? Why are you following me everywhere? What do you want from me?

Deep unknown voice: (yells back) Got any Twinkies? Maybe a candy bar? I'm getting hungry.

(Matt and Cliff eagerly go through their pockets)

Matt: Gum? All you have is gum? Bigfoot wants a snack and you offer him gum? (tosses it to the ground)

Ranae: (interrupts) Hey, guys, I got something on the thermal imager!

Cliff: It's squatch! It has a squatchish shape. Look at the height and the strides. That's total squatch, Ranae!

Ranae: What the hell is it doing? (squints at the screen)

Cliff: Look at the heat signature. He's taking a piss! We could get a DNA sample!

Matt: Let's rush him! (runs off and the others stumble behind him).

(Matt and Cliff launch themselves at the huge dark creature and tackle it to the ground, grunting and growling ensue.)

Ranae: This is remarkable! Do you know what the this means? Hold onto him! Let me get a look at it! (turns on the flashlight to show Cliff and Matt pinning a BoBo to the ground, his pants down around his ankles)

BoBo: Dudes, did you bring me the Twinkie?