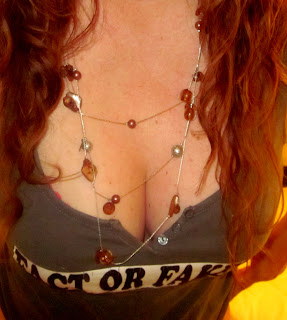 I have been waiting for this season to start forever! It moved back with GH, probably to save the old show's sagging ratings. So long as they keep it on, I'll watch it when I can get it. I have always said the premise for this show is fantastic, and I hoped that between season 1 and 2, we might see an evolution into something more endearing. Endearing? Well, we fell for Jason and Grant and their Skipper and Gilligan relationship and we fell for Josh Gates and his eccentric bunch of team members. Though I readily admit a monster crush on Ben Hansen (his brains and his looks, people!), I would like to see something that makes me come back week to week. A well-matched team could study a Triscuit cracker for a full hour and we'd be entertained to hear them speculate how they make it so airy and yet so weighty, so woven and yet so fragile. The truth is, they are likely to run into nothing terribly extraordinary, but it is our hope that they run into more scary X-Files like cases and no more mermaid stories or anything like leprechauns and the such.

So, now that their first episode of the new season aired last night, what is your review? I like to have these reviews driven by the readers who watch the show. I very very much want your feedback because the powers that be actually do read blogs and contemplate what the viewers desire. What are the show's strengths? Weaknesses? What do you want more of? What do you want less of? Did they handle the right topics last night in the right manner?

Thanks for your input ahead of time. I will voice my own review in the comments with you.