You know, I'm a lovable person. I think everyone is a little prize to be opened and cherished, to draw light to their strengths and find their weaknesses endearing. Some people, however, earn a special place in my heart because they have some amazing qualities that show their spot on the evolutionary scale shows promise for the future. Some of those qualities?

Curiosity and intelligence
Humor and ability to laugh at oneself, as well
Saying you'll do something and doing it
Whatever you find yourself doing, doing it 110%

Ben Hansen of "Fact or Faked: Paranormal Files" on SyFy channel is one such evolutionary divergence that proves we are headed in the right direction. Production companies, editing and cable channel's directives aside, this guy is just there and real and smart and hopeful and earnest and seriously knows his paranormal world. He was not an actor hoping to get a show. He was an investigator hoping to get a sponsor to investigate the big stuff. 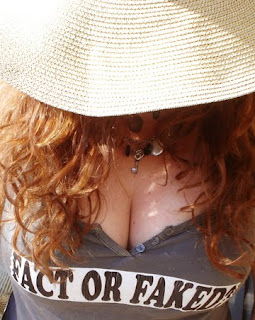 Sure, I've had a secret crush on him and am known to put on my Fact or Faked tank top for every review of the show, but then I also do music videos and drinking games for Ghost Adventures, so me showcasing shows I take pleasure in is not unusual.

Still, he is oh so tall and handsome, with that boyish grin and blue eyes. He is funny, smart, a fantastic conversationalist and with such a wide variety of knowledge, can talk about anything.

I was telling him of some episodes I'd love to see them do and he was thinking along the same lines and said they were already developing these ideas. He even knows what us viewers really want to know more about.

I am anxiously awaiting season 2 and hoping that they are into the groove and ready to take it to the next level. I remember not liking Destination Truth the first season and then falling in love halfway through the second season and being addicted by the third season. I am hoping to see the same affliction with FoF and since I liked the first season, I expect it to just get better.

You can expect when the season fires up, I will be doing my reviews of the show the next day with the tank top shots and an honest review. I hold no punches even though I have a crush on the man. I also will no doubt be primed to do some more of my LAUGH episodes (tab at the top of the blog) because that show just makes it so easy with its video reviews. If we're lucky, he will drop in time and again like he did last season and comment with the commenters.