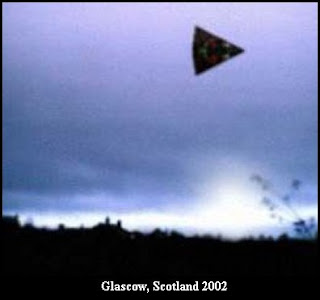 Six-thousand pages of UFO-related papers were released in Britain, covering the years of 1994-2000. This is the fifth and largest installment released by the Defense Ministry. These include reports very odd-shaped UFOs, substances being extruded, different colors, different lights and even physical illness.

The popular shape today appears to be the triangle and many believe this is a takeoff of people’s knowledge of the Stealth bomber influencing their reports. One man reported his car engulfed in a tube-like light and then dust particles after which he became very ill. Another reported a blue triangle hovering over his garden. Yet more have reported white powdery substances across the countryside and strange mysterious illnesses.

Question of the day: “Is Britain’s release of more UFO reports helpful for proving UFOs exist or does it shed less credibility on witness reports as being outrageous and nonsensical? And if so, was this their goal in releasing them en masse?”