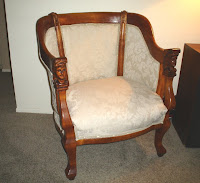 One of thousands of unanswered questions in the field of paranormal research is whether or not a ghost can be attached to an object and continue to “haunt” a favorite chair or bed or other possession.

This is obviously impossible to prove, but there does definitely seem be an association with objects, their location, and activity. People who have recently inherited belongings from deceased relatives often report suddenly having footsteps, sounds, cold spots, and a sense of being watched; all signs of paranormal activity. Under this same cloak of phenomenon, the renovation of a house and changing of its walls and coverings can also seem to release activity.

The question can be broken down even further by asking;

Does a person’s soul attach to an object and continue to stay with it?

Does his lifetime interaction with that object continue to replay somehow?

Does a person's interaction with an object continue, even when they are no longer touching it?

Does a person who has handled an object leave some kind of physical “film” or “imprint” on the object so that their feelings/memories are contained within it?

Does an object in some way pick up the event in an environment and replay it like it is believed certain kinds of stones/geology can hold and replay events?

As someone who does read objects, I know what I receive is a kind of history lesson of people who have used and handled this object, some of them only as briefly as a day. I narrow in not so much on their interaction with the object, but where they are in life when they use the object; ongoing drama, relationships, et cetera. So, as far as my abilities go, I know that objects can carry the “essence” of a person and his/her situation.

The physics of how an object can hold information is elusive. I don’t imagine there are many scientists who wish to risk their research careers studying such things, but I would suppose someone who specializes in quantam physics may be more intrigued by this phenomenon.

I’ve looked closer at objects I’ve read and I must admit that metals/stones/jewelry are easier to read, things like paper, cloth, and wood are tough to read but not impossible. So, all objects apparently have the capacity to record, but some are much more efficient at it. The only commonality I have found thus far is their density. The more dense, the easier to read. I could make a layman's assumption that perhaps if information is contained in the partical material, the more dense it is, the more information it renders.

I don’t think we can conclude anything from my observations so far, but I hope to continue to learn more about the properties of objects and where things might be held and how. Can they be washed away? Can they be worn off? Can they be altered if the object is say a wooden toy whittled down to a toothpick?

I’d love to hear anyone’s input on this subject. It will definitely be in my ongoing research.