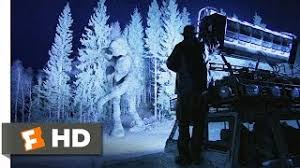 Ever wonder why so many indigenous people around the world relate giants to stone?

Key megalithic structures around the world have given us the first sample of ancient cultures, amazing feats, and the use of stone.

Let's suppose you were a "god" (alien/earlier advanced civilization) and you had a world with plenty of trees to construct living structures and burn for heat, but you choose enormous stones placed in ways that make them pass the test of time? Perhaps the use of stone was a purposeful decision.

Use what is there, use the resources available and the only super long-lasting one is stone. It works the same for potential DNA manipulation. An alien force would not come here with a to-go kit to construct a race that fits into this world. They would utilize the DNA that is available here.

The resonance, the sound qualities of stone make them ideal for the study of a newly recognized science of archaeoacoustics. Apparently an ancient people valued the level of Hertz created when chanting in a stone surrounded area.

Ancient Native People in Wisconsin reported a culture of giant white people who mined there long long ago. They said that they tapped on the rocks, creating some kind of resonance that opened up the mining areas with ease.

The mysteries of megalithic stone structures and their creation still resonants in debates today. Not to mention, the Biblical references to bringing down the walls of Jericho with the sound of trumpets..

We understand stone's place in the creation of piezo electricity. Something as simple and natural as ceramics or quartz can create a pressure and electrical charge.

So, as we can see, stone doesn't just stand the test of time, but it also creates a very important aspect of our life and its importance was valued highly by a very ancient people as of yet undefined.

Native People and tales of giants and stone -
Paiutes - Pyramid Lake's "The Stone Mother,": a rock feature that creates the pyramid in the lake, said to be a grieving mother turned to stone.
Norway - "Trolls," giants that turn to stone in daylight.
Iroquois - "The Stone Coat," giants twice the size of human with scales that repel arrows. The Iroquois have a legend of a boasting man named Skunny Wundy who claimed he wasn't at all afraid of the stone giants. The tribe decided to take him up on his supposed bravery and gave him permission to go up against the "flint coats." Assuming the stone giants were not too bright, Skunny Wundy decided to use mind tricks and they ultimately worked!
Orkney Islands, Scotland - Standing stones once a year turn into giants.
Cherokee - "Stoneclad," stone-skinned giants.
Malta - Stone structures believed to have been built by giants.
Native American - "Genoskwa," a stone giant man.
Seven Nations - Legend of the Stone Giants who covered themselves in mud and resembled stone. 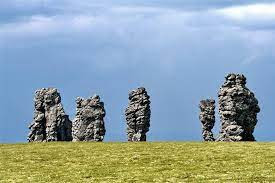 Ural Mountains - "Man-Pupu-Ner," seven stone pillars said to have been Samoyed giants. Interestingly, "Samoyed" is a slang term given to tribes in this area and its meaning is "self-eater" (cannibal). Strange, eh?
If we dissect ancient legends, we will continue to find running themes of cannibalistic giants and stone. What does this mean? It would appear that early man did live beside another culture of man that was large, carnivorous, and associated with stone.