Haunted Roadways: Do You Dare Drive? 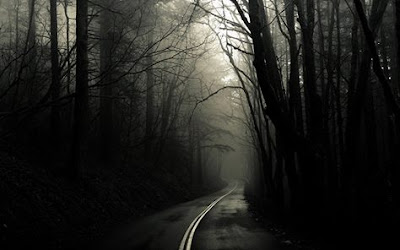 HAUNTED roadways are like a childhood dare. You just HAVE TO try them out. Here's some roadways you might want to travel - in the dark!
Bloody Bride Bridge
Hwy 66, Stevens Point, Wisconsin
The legend has it that a bride died on the bridge on the way to her wedding. They say you might catch a glimpse of her in her bloody gown, but don't look in your rearview mirror, she sometimes shows up in your backseat!
Murdered Nuns Road
Ortega Ridge Road, Montecito, California
Supposedly 3 nuns were murdered by bandits and their apparitions are said to be seen there occasionally.
Devil's Highway
Route 491 (formerly 666), New Mexico
This Four Corners' area delight is a stretch of highway known for supposed hellhounds chasing cars, a ghostly semitruck on fire, as well as ghost hitchhikers.
Extraterrestrial Highway
Rt 375, Rachel, Nevada
Mostly, keep your eyes to the sky and look for those danged ETs!
Clinton Road
West Milford, New Jersey
As haunted roads go, this one is pretty exceptional. The most famous ghost reported there is a boy ghost. He supposedly hides under the bridge and when you toss coins in the water, he returns them. Most stories relate to the boy being at the bridge at dead man's curve.

The 10-mile street has had about every kind of reported activity one imagines in such a place from driverless cars chasing folks to ghost children's laughter, escaped lunatics, satanists, and strange lights. It's one of those roads that just feels it should be haunted.
The Devil's Promenade
Near Quapaw in NE Oklahoma
This roadway is known for its spooklight, an orange orb that travels it. It moves from east to west on a gravel road. Locals figure it has to do with the Trail of Tears. It apparently shows up most often between 10 pm and 12 am.
😱😱😱
If gas prices are stopping you, consider watching movies with scary road themes -

"House of Wax"
A group of friends break down at some obscure fake town that is set up like a movie set. The wax museum appears to be filled with the real bodies of victims dipped in wax.