Giant Finds in Tennessee in the 1700s! 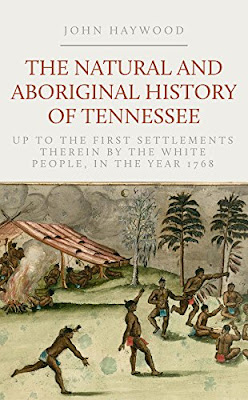 LINK FOR BOOK ABOVE

As a researcher, I often come across books that fascinate me to no end! I find that early explorers and early dig sites, back before the false narrative we are fed by governmental, educational, and religious institutions, tell what they found when it was first found and with great honesty.

This book (above) is one of my most cherished and it covered early finds in Tennessee by researchers from 1762-1826. The details of the items dug up and the extraordinary finds are mind-boggling. The early interviews with Native People also helped shed light on a prior culture in the Americas that was advanced, reportedly "white," and not so pleasant that the Indians needed to wipe them out.

"The tradition of the Indians northwest of the Ohio is, that Kentucky had been settled by whites, and that they had been exterminated by war. They believe that the old fortifications now seen in Kentucky, on the Ohio, were constructed by those white inhabitants. An idea very much confirmed by the white skeletons, and the petrified female found in a cave in Kentucky and by the color of their eyes and hair, all which are wholly dissimilar to the Indian complexion, hair, and color of the eyes. (an elderly Shawanee chief) reported western country and particularly Kentucky had been inhabited by white people but they were destroyed by the indians that the last battle was fought at the falls of the Ohio, and that the Indians drove the aborigines into a small island below the rapids. ... when the ohio water dropped, a multitude of human bones were found on Sandy Island."

"There is nothing in the history of the Lenopes or of the five nations, or of any of their tribes, which can induce a belief that they erected mounds, worshipped the sun or moon, or built fortifications, enclosing them in intrenchments, or that they sunk wells. which they walled up with stone, or that they had the knowledge of metals." (early research in 1700s in Tennessee)

(dig in Tennessee in 1700s where a series of dozens and dozens of diminutive graves were uncovered)
"The grave, as usual, was about two feet in length and 14 inches broad, and 16 inches deep from the covering rock to the bottom...(another grave) was reported as 18 inches long and 12 inches broad with little bones, piece of a tooth... (another grave) was 2 feet long, 14 inches wide, and 15 inches deep...(having sent the remains to a medical facility in Nashville) The prevailing opinion seemed to be that these skeletons belonged to adult persons....the skull belonged to an adult person of small size, not much exceeding 3 feet in length....they were found with conchs that came from a distance of 500-600 miles." (all of this within a mound)


The book goes on to cover other finds of giants, as well as these pygmies and much more that validates a prior culture here. Many history books would have to be rewritten to account for this prior culture that likely built the mounds, mined, built canals and wells, and megalithic structures around the world.
It may be inconvenient for indigenous people who take credit for what was on the land when they arrived, but it's evident from tribal lore that they readily admit a prior people being here.
Locations such as ancient mines in Wisconsins were "mined by white men from the north," according to the local tribe.
Teotihucan in Mexico is a massive pyramid complex that the Aztecs moved into, hundreds of years after the prior builders left.
The Rongorongo language of Easter Island attributed to the Rapa Nui is one they cannot decipher. There is much evidence that a prior people erected these stone statues.
We can find these sorts of advanced builds all around the world, including the Sphinx and pyramids.
This prior culture that settled the world first and was highly advanced has yet to be named, but I like to call them the originators.
It may be inconvenient for the false narratives we've been fed throughout our education, but the fact remains that we were impressed enough by them to take technology and run with it, populate the earth, while they died off.
Imagine if you will, going into someone's home where toddlers live with their parents. You might find a highly advanced book on a shelf next to a messy fingerpainting done by the child. If you attribute the book to the child who came along after the parents inhabited the house, you might give him credit for reading skills at the age of 2. But, the fact is we do this kind of assumptions with advanced finds around the planet at a time when man, especially the indigenous peoples, were still struggling to survive, feed themselves, and lived quite nomadically.
If these subjects interest you, I suggest you seek out books by explorers of places like Peru, the Solomon Islands, the Canary Islands, Australia, New Zealand, and the like.