Once thought to be sea monsters when sighted by early sailors and later finally proven, the giant squid is an amazing and mysterious alien upon the earth.

Although the octopus is highly intelligent, able to problem solve, work puzzles, open jars, their DNA couldn't be more different than ours. This has set up the hypothesis that they have alien DNA.

Aliens aside, we can all agree they are bizarre.

Putting these magical creatures into perspective, the giant squid's eyes are the size of frisbees. 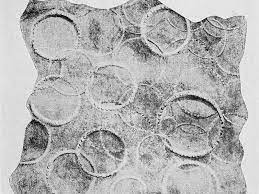 The suckers have serrated edges.

Maximum length of a giant squid is 43 feet!

Their swimming pool (ocean) is huge, but their gene pool is more like a puddle. Their is so little gene variation that from around the world samples show they don't get many changes in DNA. 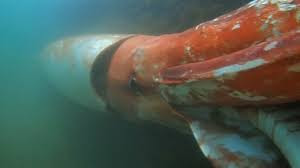 Did you know if a tentacle gets torn off, they can grow a new one?

Don't forget them on Valentine's Day. The giant squid has three hearts!

The male squid's penis is a yard long! It is used like a syringe to inject sperm into the female who is much bigger than the male.

These extremely intelligent creatures have a donut-shaped brain.

In terms of intelligence, squids are ranked with dogs. 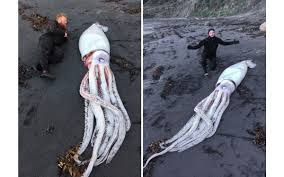