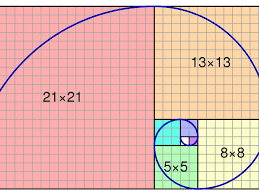 One evening, this nerd girl was watching a video that mentioned the Golden Ratio and a light went off.

The Golden Ratio (phi = φ) is often called The Most Beautiful Number In The Universe. The reason φ is so extraordinary is because it can be visualized almost everywhere, starting from geometry to the human body itself! The Renaissance Artists called this “The Divine Proportion” or “The Golden Ratio”

The Golden Ratio is found throughout nature. The spiral, for example is a commonly shared example. 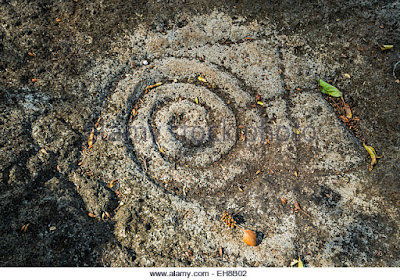 LINK:  The Fibonacci sequence is a set of integers (the Fibonacci numbers) that starts with a zero, followed by a one, then by another one, and then by a series of steadily increasing numbers. The sequence follows the rule that each number is equal to the sum of the preceding two numbers.
LINK:  The golden spiral is a pattern created based on the concept of the golden ratio—a universal law that represents the “ideal” in all forms of life and matter. In fact, it's often cited as an example of the connection between the laws of mathematics and the structure of living things.
The golden ratio occurs in many mathematical contexts. That’s why the golden spiral is often associated with the Fibonacci sequence—a series of numbers closely linked to Phi. Technically, the sequence begins with 0 and 1 and continues infinitely, and if you divide each number by its predecessor, the result would converge to the golden ratio, approximately 1.618.
When the team at Skinwalker Ranch is agonizing over what this all means, perhaps the greatest gift we are begin given is a test. It's rather like the movie "Contact."

I say this about ghostly phenomena a lot, but it has to at some point adhere to the physics of our personal universe here because it shows itself, it launches into our reality. So, anything crossing into our universe, by whatever means, will have to utilize the truths about this existence and there is no greater truth than the Golden Ratio.

Now, have a look at what frequency can do to something as simple as sand or water.

Let's look back at things like crop circles, where the very formation of such (if done by an intelligence higher than humans with boards and ropes), could be created by sound.  As some studies of crop circles have shown what appears to be microwave damage. Guess what range 1.6 GHz (signal the  ranch keeps picking up) is? Microwave. 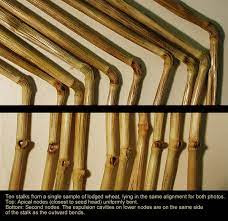 LINK:   Intriguingly, biophysicists who investigated 250 recent pictographs found that the knuckle-like joints of bent stalks were longer than those on untouched stalks from the same field. The observed elongation and swelling of these joints has been replicated using microwaves to superheat the stalks, causing them to fall over. Some patterns may have been sculpted using microwave generators, such as masers or magnetrons from microwave ovens.

We would like to think we are testing an intelligence interrupting our universe, but perhaps they are testing us. Perhaps the very laws of our universe are the answer to everything. And perhaps, just perhaps, they are utilizing capabilities that have been right under our noses - the same conditions that allow for erratic sky and water travel without damage to beings, that allowed for megalithic constructions, that adheres to frequency and the Golden Ratio to create advanced complexes around the world. 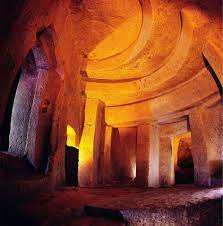 Something happened in ancient times to allow a civilization to do the extraordinary and with consideration for planetary alignments, the Golden Ratio, and even hypogeums (constructions created to resonate certain frequencies when speaking/chanting).

The Hypogeum construction (above) in Malta is a great example. It not only resonates, but also amplifies the speaker/singer's voice throughout.

And, just look at its shape. Rather spiral like, eh?

There's a great deal more to consider when contemplating 1.6 GHz, Skinwalker Ranch, and our contact with other intelligences, vortexes, or crop circles and the like. But, if we sit down and really compute these factors, we might find that AHA moment of understanding of a deeper understanding of the implications of the very rules that govern THIS universe.

It's very likely that the best way to communicate with another universe is to put it in their language - the rules our universe are buit upon - the golden ratio.