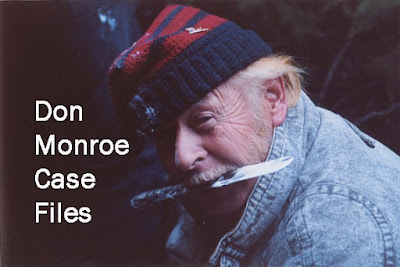 Today we enjoy another finding from Don Monroe's lengthy and thorough research career.
Link to prior installments.

While studying a very hidden cave with feral people or Bigfoot inhabiting it, Don got dozens of hand and foot casts, but one time his fellow researcher joining him, Var Harris, found some ideal hair where it caught on the ceiling, obviously something on two legs!

The hair was sent on to be cursory analyzed and then on to a lab in Europe.

Below is the analysis from Henner Fahrenbach, zoologist and submitted by Bigfoot researcher, Ray Crowe. 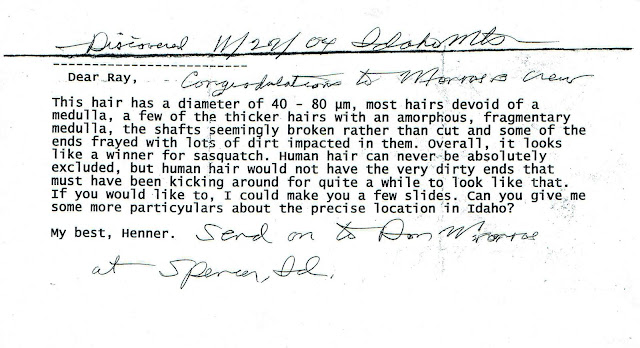 Below are the relayed results of the DNA testing in Europe. Skewers were also sent that had gumdrops that were eaten by the occupants of the cave. 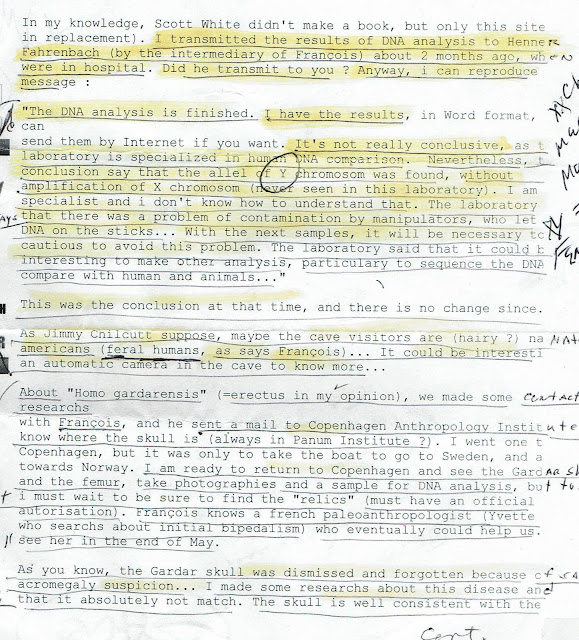 It is interesting to note "the allele of Y chromosome was found, without amplification of X chromosome (never seen in this laboratory)." The examiner said, "I am a specialist and I don't know how to understand that." There was also notation that the lab only handles human DNA samples.

Back and forth Don has pondered if he was dealing with some kind of feral people or Bigfoot in the cave.

To put these unusual findings into perspective, Y chromosome denotes a male. Men are XY and women are XX. It would seem impossible to not carry the X chromosome as most of our information is in that. We can do without Y, as women are XX, but everyone must have an X.

Mammals have an X or Y chromosome to define their gender. By this sample, the hair came from a male mammal, but without the critical X chromosome with it, it would seem impossible to be a viable living being.

If one were to take an extraordinary leap, one of the nephilim, who are said to be part angelic and part human, might show such an oddity of gender assignment without mammalian X chromosomes, creating a being that literally could have a sexual assignment, but be created of angelic content that doesn't need the classic mammalian DNA X coding.

Of course, this is quite a leap, but an intriguing one.

I'd love input from readers. Feel free to comment.