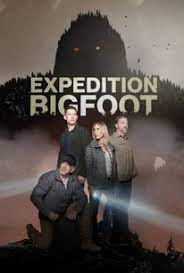 Yahoo! Season 3 of "Expedition Bigfoot" starts tonight on Travel Channel (and streaming on Discovery Plus).

This is really the only Bigfoot show I've enjoyed, with the exception of "Alaskan Killer Bigfoot" that was terribly entertaining and spooky.

The concept is a good one. Stay in an area for a month. Let it get used to you and you used to it. Nothing happens in a tiny one-night framework and when a team enters an area, they can scare things off at first.

The experts on the team have a wonderful pedigree and an honest interest and healthy techniques for interacting and documenting.

Here's the season's lineup of episodes -

The team return once again back to the Olympic Peninsula with a new plan to potentially lure out a Bigfoot. But, it soon becomes clear to the team that the hunters are now the hunted.
S3 E2 · Shadow Stalker
Mar 27, 2022

Russell tracks a massive creature to a box river canyon but finds he can't escape a shadowy figure on the prowl; Bryce discovers Bigfoot is lured in by whistling, while Ronny and Mireya realize something is watching them from across their base camp.
S3 E3 · Stalked in Terror
Apr 3, 2022

A mysterious shadow figure gets too close for Ronny and Mireya's comfort; Russell tracks a large creature along a well-used game trail but quickly realizes he's being stalked in return; Bryce makes an unsettling discovery at the bottom of a lake.
S3 E4 · Creatures in the Trees
Apr 10, 2022

A top-secret government research facility hidden beneath the forest; an up-close encounter with Bigfoot; Russell is unnerved by a gruesome discovery.
S3 E6 · Return to Lake Fear
Apr 24, 2022

The team uncovers a potential Bigfoot kill zone directly above Lake Fear; thrilled by their findings, they launch a squadron of patrol drones to sweep the area.
S3 E7 · Where the Legend Began
May 1, 2022

The team sees a lead slip through its fingers; a tip leads Bryce to wrap up the expedition in Washington state and relocate to a new Bigfoot hot spot.

Enjoy! I'm making my cheese popcorn for this one!