The Origins of Sasquatch or Bigfoot in the Fossil Records 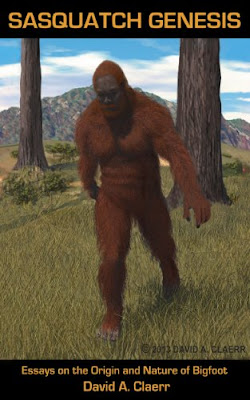 This is a post by David Claerr, a researcher and author whose evaluation and input are highly regarded by myself and many in the field.

This is an excerpted essay reprinted by the Author's Permission from "Sasquatch Genesis"; a copyrighted work by David A. Claerr, available on Amazon Books: LINK 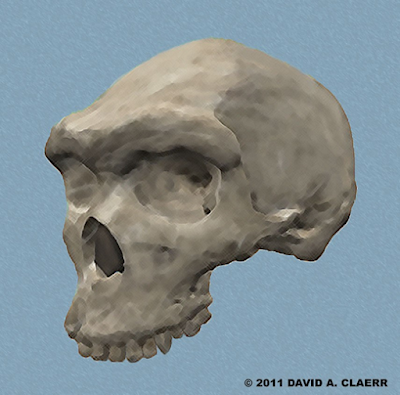 In this essay, I will present an hypothesis on the origins and nature of the wilderness hominins variously known as Sasquatch, Bigfoot, and Skunk Ape in the Americas, and, as the possibly related Almasty or relict humans in the Euarasian continent.

For the last several years I have embarked on research and study that includes field expeditions with organized groups and independent forays on my own. I have been fortunate to not only examine evidence in the form of cast prints, hair and tissue samples, photographic and video evidence, but have also had sightings and encounters with the hominins in the field. I have also been apprised of some of the interpretation of results from current DNA sequencing, the majority of which is now public knowledge. I have presented an hypothesis on issues dealing with the DNA in a previous article, listed in the Resources section below.

In the previous hypothesis, I posited that the Sasquatch and modern Humans are significantly more closely related to each other than any of the higher primates or "great apes", and share a more common recent ancestor, that may be in the direct lineage of the genus Homo that resulted in the Neanderthal, Denisovan, Cro-Magnon, and modern human. This assessment is borne out by the mitochondrial DNA which shows a close relation to that of the modern human.

In this essay, however, I am positing that there is also a close correlation of the Sasquatch to a more ancient member of the genus Homo - the family of man - based on the fossil record.

Most of the more ancient fossils of hominins and hominids are mineralized or "turned to stone" to a degree that any extraction of DNA is virtually impossible. The rather extensive and often bewildering variety of fossils are classified according to their morphology; more simply put, surface features in the shape of the specimens that match other specimens most closely.

I spent many hours visually comparing the fossil skulls and skeletal remains of hominids from the earliest ancestors in Africa, through later-dated discoveries in Europe and Asia, using hard-copy books and online resources. A resource that was particularly helpful is the new 3D CG library complied by the Smithsonian Institute, with which the computer-scanned reconstructions of fossil skulls can be viewed from virtually any angle.[1]I also reviewed the scientific literature for other possible correlations, such as the ranges of time the fossil records span, and other incidentals such as the height and physical characteristics of the species. What I was looking for were traits that I have observed myself, and that were also reported by innumerable eyewitness accounts.

The results of this study is that I have found a type of hominin that has very close morphological elements in both the unique structure of the cranium and the large, robust skeletal structure. The estimated time-span covered in the fossil record also correlates with the currently accepted theory of migrations of hominins out of Africa into Eurasia and eventually into the western hemisphere.

The specimen that is illustrated above is notable in that it was found in 1921 by Tom Zwiglar, near what is now Kabwe, Zambia. It was first known as "Rhodesia Man" after the former name of the postcolonial country. This specimen has many intriguing and significant elements. Dated at 30,000 to 100,000 years ago, It has a curious combination of both ancient and modern characteristics. The ancient features include a prominent brow ridge and a significantly prominent ridge crest along the top of the cranium, and two perpendicular ridges that run up from the sides, forming a distinctive cone-like peak at the top of the skull. Both the prominent, protruding brow and the coned cranium are often cited in reports of Sasquatch sightings. I can attest to having observed these features as well. However, there are also more modern elements in the Kabwe specimen. such as the volume of the brain-case which, at 1300 cc., is within the range of modern humans. The profile of the face is also flatter than more ancient specimens and has the structural support for the cartilage that would form a projecting or "hooded" nose with downward facing nostrils, more similar to the modern human than the ape.

Another remarkable feature of Kabwe Man is that there is an enlarged projecting feature (the occipital torus) at the rear base of the skull, which serves as a robust support for the connecting muscles of the trapezius group. This is a trait in common with another very noticeable feature of the Sasquatch or Bigfoot- high shoulders that slope up to the base of the skull, lending an appearance of having "no neck", as it is often reported.

The eye sockets, or ocular orbits of the Kabwe specimen are also larger, rounder and more widely spaced than those of modern humans. This feature could be evidence of an adaptation to low-light environments, such as a nocturnal or crepuscular (foraging at dawn and dusk) basis of activity. The Sasquatch is considered by most researchers to be mainly nocturnal or crepuscular, depending on geographic region.

One of the aspects of the Sasquatch or Bigfoot that is difficult to conceive is the exceptional height and body mass- typically reported as between seven and ten feet tall and weighing in excess of 500 lbs. Does Kabwe Man have any traits that correlate with this size? The surprising answer is, yes. Professor Lee R. Berger of the University of Witwatersrand, extrapolating measurements from the bone fragments of numerous individuals, estimates that many of them were "giants" typically over (7 ft) 2.13 m tall. [2] 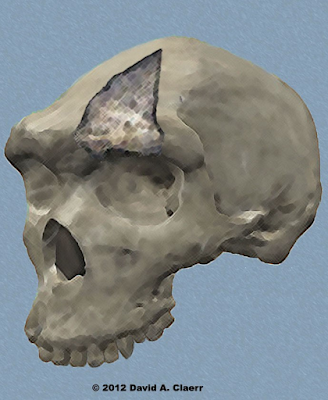 Bone Fragment from skull of probable Sasquatch from Texas superimposed on Kabwe Man skulls shows a near perfect fit The author performed photometric analysis on the skeleton, which was nearly intact. This skeleton, estimated by human proportional relationships is 11.5 feet tall

Kabwe Man has been classified as a specimen of Homo Heidelbergenis, fossils of which have been discovered in Europe and Asia as well as in Africa. (The oldest fossil cranium was discovered in Italy and dated at about one million years old) Most of the fossils, however, are dated to the Middle Pleistocene, about 780 to 126 thousand years ago. Hiedelbergensians have notable morphological traits that differentiate them from both the earlier Homo Ergaster and the later Homo Neanderthalensis. However, there are also discernible differences between Heidelbergensians from different geographical regions that suggest an ability to interbreed with related subspecies of hominins. This type of hybridizing ability has been also established, through genetic studies, in the Neanderthals, who share DNA with modern humans of Eurasian origins. The import of this is that the Heidlebergensians could be either the ancestors, or a closely related subspecies, of the same hominins as the Sasquatch or Bigfoot that inhabit North America today.

Another important aspect that is currently being researched is the apparent capability of speech in the Sasquatch, or Bigfoot. Sound recordings dating back as far as the 1970's have provided evidence of complex vocalizations that follow patterns similar to those found in human languages. The significant correlation in the fossil record is that H.Heildelbergensis also had the hyoid bone as part of the structure of the larynx. The hyoid is a roughly horseshoe-shaped bone that is critical for the formulation of distinct syllables and enunciated words.[3] The hyoid bone in H.Hiedelbergensis is another feature in common with the Sasquatch.

Though the exact origins of the Sasquatch at present is hypothetical, it is imperative that extensive nuclear DNA sequencing be performed on the currently available, vetted samples collected by researchers throughout North America. By sequencing the entire genome of even a few individuals, we will obtain vital clues as to the origin of Man, and knowledge that may help us with medical advances and genetic therapies. Any serious professional in the fields of anthropology or biology should recognize that we have the opportunity for what will certainly be one of the most significant scientific discoveries of the 21st century.