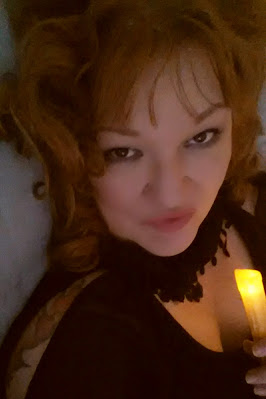 To say I've been around the  block when it comes to paranormal experiences is an understatement. I've personally been involved in a strange portal jump, seen Bigfoot, had lifelong grey encounters, grew up in a famously haunted home, seen lots of UFOs, and more.

But, when it comes to utter fascination and almost obsession for info on certain topics, here's my 10 favorite topics I can't get enough of (no particular order) -

1. Strange earth sounds being heard around the world
These trumpeting sounds are highly unusual and totally interesting. What do you suppose is going on?
Could it be magnetic north pole shifting? Maybe the earth's tectonics are amping up and creating a resonance? Or something more ominous??? 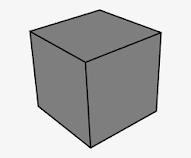 2.  Sky cubes
Seen around the world, these physics-defying floating cubes are seen through skimming clouds, hovering, slowly dropping, and have been photographed and videotaped extensively.
What is going on? Portals? Something that is always there but we visually don't perceive it unless conditions are right? A weird version of a fata morgana (mirage)??? 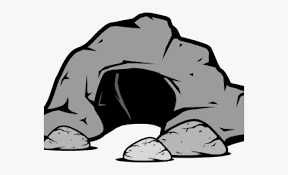 3.  Cave beings
From the red-haired giant of Kandahar to the pigment-less creatures portrayed in "The Descent," the idea that human-like beings might dwell within deep caverns in the earth is a creepy and fascinating prospect.
Is it possible there are adapted human-like creatures in caves? Maybe. My focus now is that ancient giants retreated as the ice melted off in late Pleistocene and took to the caverns and still could be tromping around down there.... 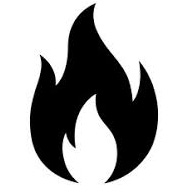 4.  Spontaneous human combustion
As a child of the 70s, this was a super popular unexplained phenomenon that was in newspapers and shows like "In Search Of." I remember worrying when I overheated....
What causes it? A wick theory has made the rounds for decades but then shot down pretty hard. It would seem that we are still left pondering how someone can go up in flames, parts reduced to ashes while other parts intact, and surroundings unharmed.

5.  Wee folk
It began with legends of Leprechauns, elves, sprites, tommyknockers, and the like, but then real-life witnesses had stories of actual tiny people of the forests.
Hundreds of graves dug up in the 1700s in Tennessee revealed an entire civilization of 2-foot tall people with odd almost dog-like skulls. Were these what the Cherokee referred to as the moon-eyed people? Evidence keeps popping up. 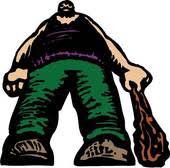 6.  Ancient giants culture
It's hard to read this blog without realizing a HUGE part of my research focus is on the finds of ancient giant civilization, megalithic structures, giant geoglyphs, canals, pyramids....
Were they biblical Nephilim that the deluge was supposed to kill off? Perhaps they are visitors from Planet X? Maybe they were a first form of man back in an era of gigantic flora and fauna?

7.  Portals
Is it possible that upon occasion a doorway between two worlds opens up? Is this spontaneous and a natural feature of earth or something directed by an outside sentient being?
A friend and I had our own portal situation driving a car north back to our hotel. My friend wanted some water, so we turned right into a convenience store, passing a lineup of trucks parked. She got the water, we came back out along the lineup of trucks to the road. We turned right to continue north. You physically couldn't turn left because of a median. We started driving (area of town I lived in and knew well) and I realized we were headed south after a few blocks. The street signs read down toward the convenience store again. We had gone from heading north to turned around and heading south and a half mile further up the road, but we made no u-turns. 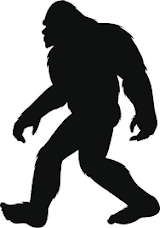 8.  Bigfoot's origins and capabilities
Having seen one in 1985, I feel fairly confident it wasn't a man in a suit in the Sierras, hiding in a clearing and avoiding humans at 8000 feet elevation. Since then, nothing was ever the same again.
Who are these feral furries in the forest? (say that three times fast) Their origins have been an obsession and knowing there have been many giant skeletons found in America around an ancient culture of mound builders, and having Native People with legends of the prior civilization and them driving off and killing the giants, a hidden bunch of tall ones in our forests isn't infeasible at all!

9.  Spooklights
Spooklights are found along forested roads, deserts, and the like. These strange lights go into many categories. There are the will o'the wisps that appear like a small smouldering light that appears sometimes like a blue fire or other color. There are white lights that remain in place but their origin is unknown, like the Marfa Texas lights. There are the Brown Mountain lights that seem to be active and move about. Deep in the woods as investigators look for Bigfoot, they very often run into a lantern like light that, no matter how they chase it, they cannot find its source.
As a child, I witnessed blue ball lights that silently danced around a graveyard across from our summer home. As an adult, me and a friend witnessed red-orange ball lights dancing, chasing each other, appearing and disappearing above the desert.
What creates these things? I tend to think more sciene about the subject. When studying a ghost town tucked into some mountains in the desert where there were constant strong winds, the green ball lights I supposed could be made from some of the particles of chemicals used for mining processing lit by static electricity. 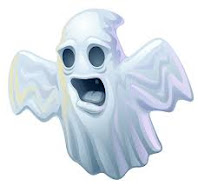 10.  Poltergeists
I have had many encounters with what is considered poltergeist activity and most of it I would attribute to psychokinesis, others not so much.
My two sisters (11 months apart) fought a lot in adolescence in our very haunted Civil War hospital home. Activity of objects flying and moving happened frequently. When I reached adolescence, it happened again. As an adult, long-held anger can make me be a bit of a magnet where metal comes toward me - a knife across a counter, cans on a shelf, metal ornaments on a tree, a hair pin jumped out of a container into my fingers... But at the same time, the haunted house I live in now has objects moved, cabinets opened and closed....
What is going on? I suspect the human is a huge factor in this equation. 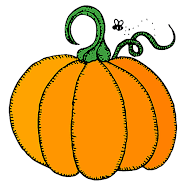 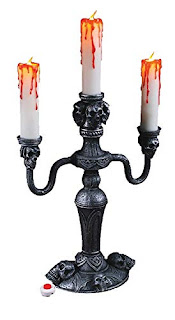 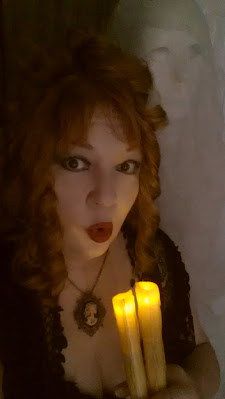 Use it for suppertime, nighttime atmosphere, posing, movie time, or drape furniture in white sheets, add cobwebs and spiders, and put the candleabra on the coffee table of an abandoned mansion....

Haunt the house with Atmosfx holographic imagery with projector and light cloth. I love this so much because you can do 80s slashers, Phantasm, and other seasons too without anyone stealing your outdoor decor. Just put the mesh cloth stretched in a window, garage door windows, or doorway and project for holographic effect. 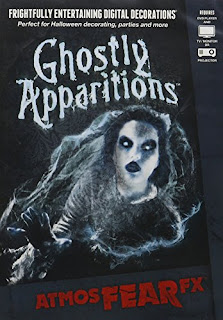 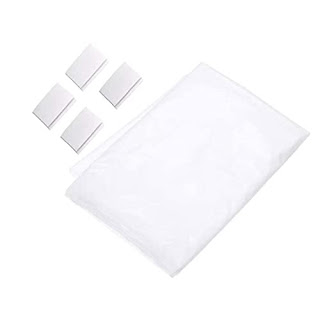 window mesh to project on 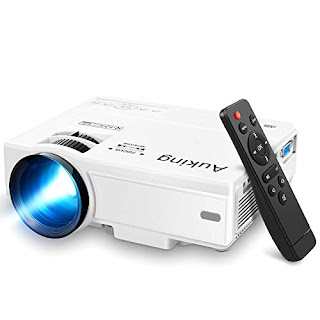