Last night was another episode of our favorite History Channel show, "Secret of Skinwalker Ranch."

We were a bit late at posting this, as for some reason, the second the show started on Cox Cable, it went black. Had to watch it in the morning when they had it available.

The team pondered the portal-like void on the thermal imaging at Homestead 2. They decided to gather lots of equipment and go back and do another study to see if it occurs again and what it is.
Meanwhile, Thomas Winterton brought on the nephew of the Shermans who owned the ranch in the early 1990s. Steve Wall was an excellent witness, sharing some terrifying thing.
One night, him and his uncle watched a blue orb dance down off the mesa area and then they found dogs dead on the property. They appeared as if something hot and heavy smashed them to the ground, squashing them, and leaving a burn-like mark on the ground around each.
He pointed out an area on the mesa that seemed to be the seat of much high strangeness.
Steve mentions a peach object in the sky that had moved over the canal and appeared to be scouting for something. Then, it suddenly shot straight up. He pointed to an area of the ranch's oddities. It happened to be a triangle the team had defined by bizarre readings on their meters. It was under the area in the sky that showed energy.
Gary Blocker, a thermal imaging expert showed up the next late afternoon to set up. The team set up thermal/infrared, as well as thermometers for temperature readings, and meters that measure every kind of energy imaginable.
Thomas and Kaleb headed down the road a bit to the place where he saw a light of some kind the last time they did the experiment.
As soon as they started replaying the rabbi's chant from the prior event, the thermal imaging showed a rapid rise in temperature on the homestead.
The temperatures showed it went from 38 to 47 degrees (after dark). Guy said he had never seen this response on the thermal when doing studies.
Thomas saw a flickering light in a window at the homestead. He and Kaleb gave chase. When they arrived, no light, but pocket of air on the thermal was beginning to form like the last time when the "portal" appeared. The thermometer set in the window, was on the ground.
With infrared spyglass, Travis saw something walking out back. The men gave chase.
Travis looked through infrared. With his eyes, he didn't see it, but through the scope he saw something moving that was 6 feet in diameter, intense and got dimmer. As he stared at it, it moved sideways and into the thicket.
Thomas said, "it's not animal and it's not human...this may be something not physical."
They ended for the night and the next day, Eric had Travis and Dragon come to the monitoring room and see something. Surveillance of the mesa showed the glow above it occurring where it has before, and this happened during their experiment.
Thomas rushed in during the reveal to let them know something was hacking into the wifi. They put the spectrum analyzer on and it showed energy spike across the spectrum of frequencies. This, Travis let them know, was not mother nature, but something manufactured.
Travis recalls the last time he saw this sweep across the frequencies when he was sleeping in the trailer and got up to hear some buzzing. At the time, he contemplated a wormhole forming.
It appeared that the frequency range was in the 700 mHz level.
Travis rushed over to control the antenna and see where the source of the frequency spectrum was coming from. He narrowed it down, but then it began to move around the ranch area.
Thomas announced he had a bad headache, jumped in the jeep and drove off the ranch.
Travis said this broadband had structure like we do not use in electronic applications. He wouldn't be able to reproduce it. A transmitter had to be on site somewhere that was like nothing Travis had seen.
Just then, Travis went silent, couldn't hold a thought, short of breath, dizzy.
Dragon decided to rush over to see what was up with him.
He had Travis leave the trailer and go into the steel silo where signals would be blocked. As soon as Travis went inside, he was fine. When he came back out, he felt fine. They checked the meters and the crazy spectrum of frequencies was gone.
They let Thomas know it was over and he was feeling better, so he agreed to come back to the ranch.
In closing, Brandon Fugal ponders that they are dealing with an intelligence and something with command of space and time.

Interestingly, over a week ago, Dennis and I wrote 4 things we like the team to do and the first one on our list was sound frequencies.... Upon seeing preview of next week, detecting terrestrial caves (second on our list) is very appropriate, as well.

Everything below was written last week before the show aired - 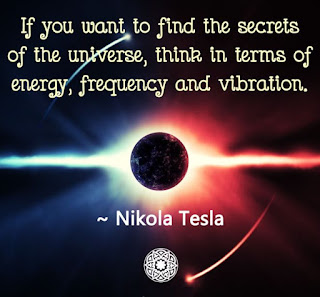 1.  The use of sound frequencies. Let's check out resonance and vibration by the use of sound. Check the spectrum from infrasound to ultrasound. Setting up a meter for picking up infrasound might be especially helpful.

3.  The use of electric logs utilized by oil and gas exploration. Sending instruments down, they can gather info on water table, porosity, permiability...  gamma-ray, caliper, resistivity, density porosity, and neutron porosity.

4. Geologist! The team could use a geologist on hand and delving into rare earth elements in the area. Dennis concluded and I agree that REEs correlate with portal-type locations around the world, UFOs, and ancient giant cultures.