Stalker Between the Worlds: Does It Read Minds?

*Warning: Photographs and information in this ongoing series might be upsetting to some readers. Discretion advised.*
This will be an ongoing series chronicling a few years' worth of encounters with bizarre, horrific, and taunting interplay between one innocent citizen and a stalker that defies description (at least in our known world).
This was an exceptionally well-documented series of events that may at times be too graphic or horrifying for some readers, but it is our hope that by sharing this experience, someone out there might recognize a set of circumstances that are similar.
We have advice to be given to anyone encountering what I am at a lack of words to accurately describe, so henceforth refer to it as…the stalker between the worlds.
Prior episodes HERE
Life got in the way for a time and The Walker found himself housebound with an injury and then traveling the country.
When he was back home again and feeling more himself, a friend called. This particular buddy was a book-reading intellect, world traveler, and outdoorsman. He rattled on about the usual subject, bear-hunting season, his latest junker car that barely made it across country, and his already filled up calendar for the year.
But, it was an off subject brought up during the conversation that caught The Walker's attention. His buddy mentioned a book about Bigfoot. In the book, the author described Bigfoot catching and killing a bird with his bare hands.
That conversation rattled around in The Walker's head days later when he was restless and decided to begin his routine walks again.
He tied up his sneakers and headed outside into the fading winter landscape to spring's promise.
He did a fine job of pacing himself and it felt good to be exchanging lungs full of air and seeing the hints of a changing season.
Try as he might to avoid thinking about it, as he approached the "weird alley" where dead animals were displayed in the past and odd things were left behind, The Walker kept his even pace, refusing to slow down or pay attention to the sides of the road.
But, as he lifted his gaze to the spring growth on the trees, he saw something that had him automatically skidding to a stop.

A bird's wings held by sinew, draped over a limb.
"Bigfoot can catch a bird and kill it with its hands."
Even more concerning for The Walker than the mutilation was the thought that he had just talked on the phone with a friend who told him how Bigfoot could catch a bird with bare hands and kill it.
Coincidence?
Even though he had just started his walking circuit again, The Walker picked up his pace.
Screams from the woods had scared family members who were nervous being alone at his home. It was time to set up a camera system.
*
A couple weeks later, comfortable that the route had been quiet and no surprises, The Walker took off down the country roadway.
As usual, his mind pondered his life, how his joints were recovering, where he was traveling to next, the upcoming hot season....
His eyes went down to the asphalt as he walked and something orchestrated and unnatural appeared.

In his research into possible intelligent beings that might be stalking him, The Walker had come across an ancient twig language called Ogham. The lineup of the twigs seemed to be spelling something out purposely, utilizing the line that was in the pavement.

Seemed as if it read BHAM or possibly MABH depending on the approach.
Although that didn't seem to make sense to him, The Walker tucked that away in his vast array of nonsensical things.
His mind went back to the time he was sitting in a restaurant and pulled out his phone to see it opened to the researcher of Ghost Hunting Theories for sending a text to her. The odd message even managed to spell a capitalized word twice with capital letters the same way, and some other words that made sense. 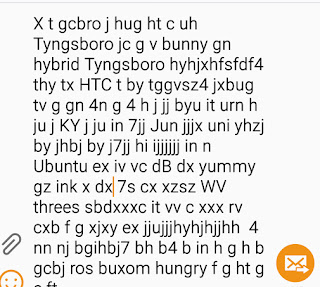 LINK TO THIS POST
Trying not to overtax his mind on this puzzle, The Walker did what he always did, walked away. It was his sincere hope that The Stalker wasn't still wandering his country roads, maybe moved on.
*
A few walks later, The Walker could not avoid the obvious when it showed up on the road.
With a double-take, The Walker came to a halt the moment he saw something familiar and grotesque.
The location was the same one he had seen some enormous matted furry thing cross the road on all four and bound away.

The spine of a squirrel was torn out and dropped, the squirrel skinned by hand it appeared, flesh peeled back inside out.
If this was a kill, it wasn't eating the flesh and it was extracted of its spine by the only creature that could do this, something with hands.
Memories of more than a dozen ripped out spines  rushed through The Walker's mind. These occurrences were often over the years. 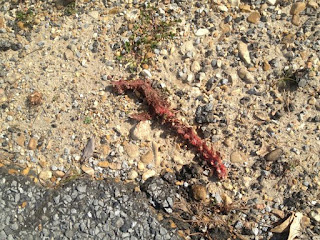 2016 spine found - one of many
He lifted his head, looked into the spring bright green thicket along the roadside, his mind whirling with thoughts like,
"is it watching right now?"
"what IS it?"
"why does it do this when it's not eating the kills?"
"that had to take a lot of strength!"
"should I secure my home again?"
As he picked up his pace and left the grotesque sight, The Walker relaxed his muscles and reminded himself that this thing had not hurt him or his family, so far.
So, far....
NOTE FROM ME, GHT BLOGGER/RESEARCHER:  You won't believe what happened to me! Yesterday, about 12 hours before this post is scheduled to go up, I was coming out of a tax office. I wanted to pick up a few things and the grocery store was right beside it. Something inside of me said, "no, don't go there!" So, I got in the car, went a couple blocks away to the drugstore to get the things.
There was only one parking space open. I pulled in and got out of the car to go up on the sidewalk that takes you to the front door and directly in front of my car on the sidewalk was this - 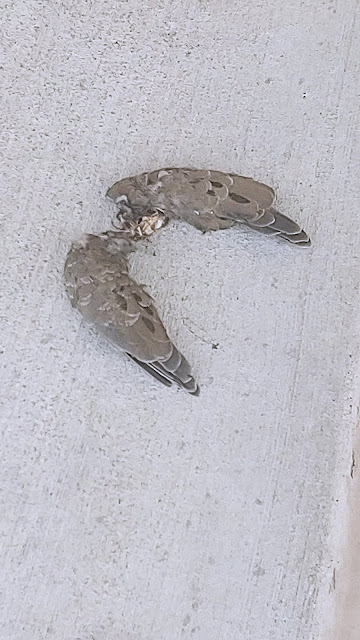 So, The Walker talks to someone on the phone and the person tells him about this book that tells of Bigfoot catching a bird and killing it with his hands and then The Walker goes for a walk and finds the bird wings hanging from a branch in the area where strange things are seen and left behind.
One remote person, one person there in that area. Now, I'm about to take the story and post it in a few hours and I'm a remote person, but boom - I find the same thing in the only place I could see it, feeling directed to go there....
What do you suppose the chances are? This isn't the first time something happened with The Walker and The Stalker and then I was somehow included about 1500 miles away!
Synchronicity
There are no coincidences
Directions from a source
Something observing/testing us
Skinwalker-ranchesque
more to come....