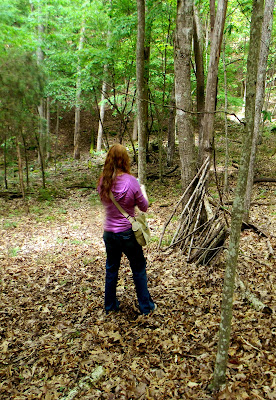 With regards to our tall feral neighbors, some behaviors catch our attention, such as infrasound, screaming, wood knocks, and especially the stick structures.

Let's talk about some of the possible reasons for stick structures and review some of the most amazing formations to be found.

Some theories involving stick structures include -

marking territory for a clan

As the structures aren't always little lean-to's, they are also found in the form of an X shape or arched bow, it is generally believed each construct means something different.

In studying arches and X's, I've come to find a pretty consistent use of X marks where the human land begins. It's as if they know others of their kind or their own clan going through an area needs to know "bow" please enter into our land and "X" please don't pass as you are close to humans. This makes sense as one thing they need to know as they travel on foot is the knowledge that the local clan has about the area. There isn't time to spend days and weeks and months studying a piece of land for human areas and safe areas, but if they pass the knowledge to everyone of their kind, they save them time and effort.

As it has come to horse mane braiding, I've found if a Bigfoot is traveling along new areas, the rural places are their preferred course. In rural areas near woodlands, you find horses in pastures. If the manes are braided, the clan could be letting others know that there is a clan in the area.

These subtle constructs using nature, such as limbs and horse manes can elude humans, but be the very "natural" looking markings that they seek for knowledge. They can't put out a sign "hey the Enoch Clan is here" or "don't go that way, there's humans," but they can do it in ways we are oblivious to.

That being said, the stick structures particularly are of interest as they almost always involve a base tree, whether standing or broken off, that limbs are stacked against, woven, and formed into a kind of tiny house. One that almost invariably does not fit the size of a human.

But, in some private studies among Bigfooters in our research group, the Bigfoot do have a kind of daycare situation in which very young ones are left in a kind of nested area near a tree. The wee ones play games with tree bark and try to abide by the rule to not stray.

My theory on these structures are they are built for the wee ones and guarded by one sentinel at the opening, they will be easy to protect. The concept would be to place the toddlers within and have one adult sitting guard.

These Bigfoot daycare centers make good sense as it is the best way to wrangle wee ones and also to teach them to stay near the trees for protection. In other words, hide at the tree; a lesson hiding and feral parents would want deeply embedded in the next generation's psyche.

Let's have a look at some of the best documenting of stick structures I've ever seen. This comes from the fantastic and insightful channel Southern Ontario Sasquatch.   This researcher appropriately calls them "wood nests."

There are plenty of reasons for stick structures, including a human-made hunting blind, but when it comes to the work of the Forest Ones, it would appear that these are not there for ornamentation as their prime directive is not to decorate the forest, but to remain cloaked and ignored.