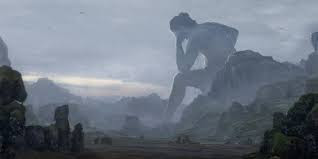 Nearly every tribe in America tells of some giant race of white people with blue eyes who were settled in with cities and technology such as mining and canal work residing here when the Amerindians first came to the lands. They also speak of trying to co-exist, but finding it a difficult task.

In studying man's arrival to the content, I've found a few anthropologists stating that the Pre-Columbian populating of the Americas occurred in two waves, one by sea and the next by land.

With that in mind, it would seem that the Amerindian people claimed the content from another race that they could not co-exist with. They are said to have killed off the giants or drove them off over time.

1857: Chief Rolling Thunder of the Comanche said: “Innumerable moons ago, a race of white men, 10 feet high, and far more rich and powerful than any white people now living, here inhabited a large range of country, extending from the rising to the setting sun. Their fortifications crowned the summits of the mountains, protecting their populous cities situated in the intervening valleys. “They excelled every other nation which was flourished, either before or since, in all manner of cunning handicraft—were brave and warlike—ruling over the land they had wrested from its ancient owners with a high and haughty hand. Compared with them the palefaces of the present day were pygmies, in both art and arms. …” (source)

LINK:  In his book “History of the Choctaw Indians, Chickasaw and Natchez” (1899), Horatio Bardwell Cushman writes: “The tradition of the Choctaws . . Told of a race of giants that once inhabited the now State of Tennessee, and with whom their ancestors fought when they arrived in Mississippi in their migration from the west. … Their tradition states the Nahullo (a race of giants) was of wonderful stature.”

The Wisconsin natives described a similar kind of man there mining copper when the ancestors of their tribe arrived to those lands long ago.

The Paiutes tell of these people in Death Valley back when it had water, living underground, utilizing boats, and eventually going underground permanently and utilizing flying silver disks instead.

The Cherokee tell of the moon-eyed people who were sensitive to light and did their chores at nighttime.

The Paiutes tell a tale in Nevada of trapping red-haired giants in a cave and burning them.

The victory legends told by Native People carry common threads of description. If there had been another "tribe" here when they came to the mound-building areas, why call them giants? Why not just say they fought off another tribe? The giant element appears to universal all the way down to Peru where the native speak of them coming on shore. Even the Inuits have an ancient settlement's remains said to have been inhabited by blue-eyed white people.

Did Tennessee have ancient giants?

The Bat Creek stone (above) dug up from a "Native American" burial mound in 1889 has an inscription undeciphered, although some swear it's Hebrew. This writing appears to be a universal influence on many language across the globe, revealing the conclusion that man developed written language based on observed writing by "prior" people. 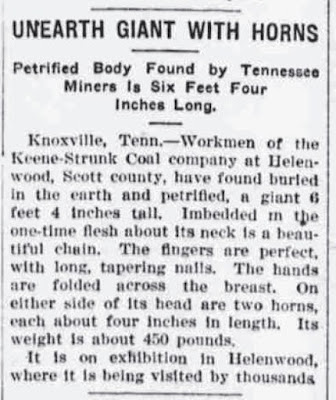 In my studies, it would seem that Tennessee, Missouri, Kentucky and West Virginia might be some of the most giant-rich lands that have not been tapped yet.

It is interesting to note that in the book "The Natural and Aboriginal History of Tennesse" (1768) by John Haywood, he discusses the digs in the 18th Century in Tennessee that yielded giant skeletons as well as hundreds of very small ones, 2-1/2 feet on average.

I hope this keeps y'all pondering what civilizations were here before man spread out and claimed "indigenous" rights to what was there, repurposing these structures and writings for their own.