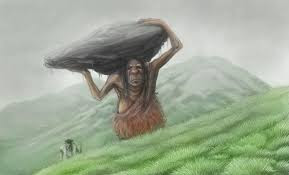 Nearly every culture has a giant of legend. For the Basque, they are called the Jentil, Basajaun and Mairu.
The pre-Christian builders of megalithic structures were referred to as the Jentil by the Basque people as well as Mairu. Like Native American legends of the giants of America, they were said to live alongside the native people.

They were referred to as very tall, 12 feet and over and hairy. They were said to be expert at throwing rocks long distances. In fact, some games of the Basque people were designed as powerful and accurate tasks involving stone. They were said to have built dolmen around the countryside.

They were also attributed with living in the mountainous regions. Sounds familiar, hmm?

For instance, this recently exposed Stonehenge-like circle of rocks was dated at around 4000 years old. It was in a reservoir that dried out during a drought and exposed this amazing find. 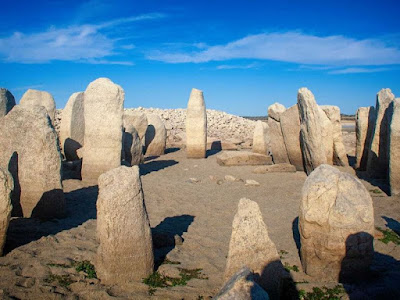 In Basque mythology, Basajaun is a huge, hairy hominid dwelling in the woods. They were thought to build megaliths, protect flocks of livestock, and teach skills such as agriculture and ironworking to humans.

I find this intriguing as cultures around the world report the giants were mining, writing, and making canals and huge stone structures and that taught us to follow. In fact, it appears a culture of advanced people before us, set out around the world, settling in and building pyramids, megalithic structures, finding ways to capture water and work metal, leaving their pictographs around for us to ponder. In fact, we might have at a time viewed them as gods or masters if they enslaved us to work. That prior culture that seems to be now missing might be attributed to the Denisovans. 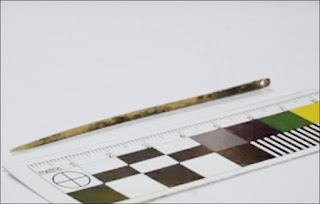 When we were still cobbling chipped stone into hammers and axes, the Denisovans 40,000 to 50,000 years ago were making fine needles (above) and beautifully sculpted jewelry (below). 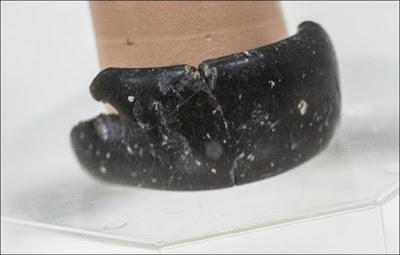 I hope at some point we find out if today's man learned about language, mining, agriculture and more all around the world from a culture that we can name and give a silent nod to for jumpstarting our knowledge.

Another interesting legend of the Basque is the one about the Lamia. These beings were said to live around rivers. The story goes that if one left gifts, the Lamia would magically build a bridge overnight, finish plowing a farmer's field, or prep caught fish alongside the river. The male Lamia were said to be strong and built domens and that the Lamia sometimes sneaked into homes while people slept.

People say that the Lamia left when men began building churches in the woods. Once again, it seems these "early people" were associated with pre-Christianity era.

In America, the Native People have many names and explanations for the tall hairy ones.

"ge no sgwa" Seneca and Iroquois for "stone coats" or "stone giants" said to cover themselves in mud.

"skookum" used by the Chinook as meaning "evil god of the woods."

In America, we not only have reports of tall hairy giants from pre-European arrival time, but today people still report seeing them in the forests and especially the mountains. They are said to throw stones. And here in the Americas we still have the mounds and structures left behind by a culture that reportedly co-existed with the people we term Native.

Were there giants in the Basque areas of Spain and France? Legends give way to some truths, sometimes truths we don't want to see. The question now is - did any survive?