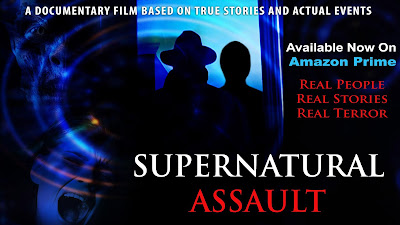 Sometimes, I see a documentary I insist others check out. THIS (Supernatural Assault) is one of them. If you have had shadow people encounters or other unsettling interactions or you are fascinated by shapeshifters, the Djinn, or shadow forms, THIS is one to see and free on Amazon Prime!

SUPERNATURAL ASSAULT was released on Amazon Prime to stream for FREE.

The film is available to stream in the US, UK and 63 other countries Worldwide.

Supernatural Assault has received a lot of positive attention since its release in 2018 and is being hailed as one of the creepiest documentary films ever made by those who have seen it.

The Documentary features the late and great Rosemary Ellen Guiley and has been prominently covered by many media and radio outlets such as Coast to Coast with George Noory.

These supernatural encounters have been experienced by millions of people Worldwide and Supernatural Assault tells the real stories of some of those people from the US and abroad. The film is dedicated to the memory of Dawn Howley, a Maine resident who was plagued by Shadow People and who died unexpectedly in strange circumstances shortly after her interview for the documentary.

The film is on Amazons Prime program so it is FREE to Amazon members.

I've watched this on Amazon Prime and I could not stop watching. Witness stories and encounters helped me to both understand why my shadow people encounters had such strange emotions but also to see others stories that varied. It is very compelling watching!