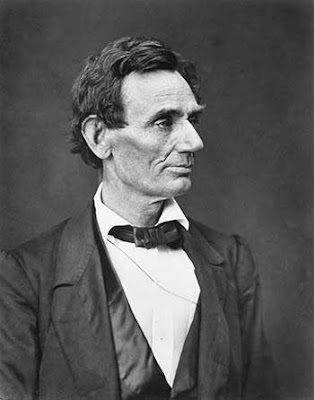 You can’t talk about famous ghosts without mentioning the most beloved one in America; Abraham Lincoln.

The haunting of the White House by Lincoln is a favorite story among historians and romantics in America. After all, when you have a parent that you trust and you believe is a good and honest person, then who replaces them? We have yet to have a president we regard in quite the same one as the man responsible for stitching America back together again.

His early loss makes him an likely suspect to malinger (think of Elvis and Marilyn Monroe). Perhaps we're not ready to get rid of the ideals that put America on the map. But then, again, perhaps we sense that he really is still amongs us...

(From Wikipedia) President Theodore Roosevelt, Herbert Hoover and Harry Truman have all claimed to have heard unexplained knockings on their bedroom doors. What made them think it was Lincoln is unknown.

Calvin Coolidge's wife reported seeing on several occasions the ghost of Lincoln standing with his hands clasped behind his back, at a window in the Oval Office, staring out in deep contemplation toward the bloody battlefields across the Potomac.

Carl Sandburg, Lincoln's biographer, said he did not see the ghost but "strongly felt his presence" when he stood at this same window during a tour of the White House.

Elenaor Roosevelt often sensed someone watching her in the former Lincoln bedroom. Winston Churchill said he stepped out of the bath to the adjoining bedroom and saw Lincoln standing near the fireplace. Lincoln's ghost made many apparitions during the Franklin D. Roosevelt administration. Roosevelt was (coincidentally like Lincoln) president during war time.

Maureen Reagen (President Ronald Reagen’s daughter) said she had seen ghost several times in Lincoln’s bedroom. The Reagen’s dog apparently would bark at the door but not enter.

Lyndon Johnson supposedly spoke to the ghost of Lincoln, asking his advice. Senator McCarthy proclaimed that he entered Lincoln’s old office and a bust of the president flew across the room and nearly hit him. (Of course, in McCarthy’s case, Lincoln was a bad aim—-he should have hit him upside the head and knocked some sense into him).
The Roosevelt presidency saw the most activity and many conjecture that it was because he was a president during a wartime.

Queen Wilhemina of the Netherlands visited during Roosevelt’s presidency and she was awakened by a knock at the door to find President Lincoln there.

Why do you suppose he showed himself for some and not for others? Was he a harbinger of some message to beware? 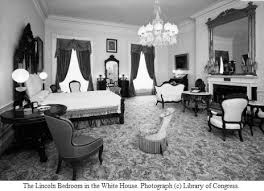 When I did my study of 50 haunted places, the White House was not a strong contender because it lacked a lot of traumatic history within its walls and the geology was weak. The building’s construction is promising.

he thing that might outweigh all other factors is the symbolism of the White House. If a ghost of an average Joe can haunt his home because it was his beloved sanctuary, then surely an assassinated president could linger in a place he felt very protective of and very proud of.

“About ten days ago, I retired very late. I soon began to dream. There seemed to be a death-like stillness about me. Then I heard subdued sobs, as if a number of people were weeping. I thought I left my bed and wandered downstairs. There the silence was broken by the same pitiful sobbing, but the mourners were invisible. I went from room to room. No living person was in sight, but the same mournful sounds met me as I passed alone. I was puzzled and alarmed. Determined to find the cause of a state of things so mysterious and shocking, I kept on until I arrived at the East Room. Before me was a catafalque on which rested a corpse wrapped in funeral vestments. Around it were stationed soldiers who were acting as guards; and there was a throng or people, some gazing mournfully upon the corpse, whose face was covered, others weeping pitifully. `Who is dead in the White House?’ I demanded of one of the soldiers. `The president,’ was his answer. `He was killed by an assassin.’”
Lincoln’s life would appear to be quite serendipitous and perhaps that carried over into his passing. Many people note connections between Lincoln and Kennedy. At this site they listed them out:

Both had previously been members of Congress. Lincoln was first elected to Congress in 1846; Kennedy in 1946.

John Wilkes Booth shot Lincoln in a theatre and fled to barn; Lee Harvey Oswald, Kennedy's accused killer, shot from a schoolbook warehouse and then fled to a movie theatre. Both assassins were killed before they could be brought to trial.