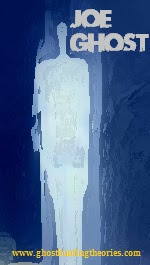 (LINK TO PRIOR INSTALLMENT)


I have another chilling update on Joe the Ghost - the kind and helpful ghost here in the house.


In September, a neighbor across the street died alone in her home. We hadn't seen her for about a week. The police were called. I asked them to look in her mailbox and they found it was stuffed. Breaking down the front door, they found the elderly woman passed away alone.

The house sat for months.

This was the lady who told me about Joe who died here and the para-things around him, that he had chased the lights we see on the mountain and had been abducted by aliens.  She was also very much into para stuff.

One day after she died, a woman who looked identical to her smiled at my angelically in the grocery store, called me by name and said "Hi, It's me .Sandy." She looked at me and squinted. "oh, sorry, must be wrong person."

Then, one night a week or so ago, I woke up to a man saying my name. Checked the house out. No one there.

I lied down on sofa and fell asleep. I woke up and there was a dark man's figure rather 2-dimensional cut-out looking leaning over me as if to try and shake me awake. I startled. It disappeared.

At that time, some man called Joe let the woman's family know she was dead. An blocked phone number.

Yesterday, a man knocked at the door. He was the nephew of the woman who passed across the street.

He said a man called Joe from here had called to tell them about Sandy passing. No Joe's around here.

The only Joe on this street was the one who apparently woke me up that night and called her family and left a message.