All Puppet Players: "Friday the 13th" 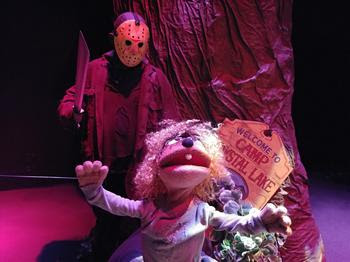 Last Saturday night my son took me to All Puppet Players theater for a bawdy couple of hours of Friday the 13th musical with puppets. When they say 17 or over only, they mean it!

It was the funnest couple hours I've spent in years!

The presentation was done on a huge stage with thick tall trees and a giant full moon, fog rolling in, and cricket sounds. Even the air had a wee chill as if you were in the woods.

On the stage, popping in and out of black curtains, were players dressed in black from head to toe, including their faces as they held the puppets in the air, creating their gestures, voices, and singing.

Besides breaking through that wall of reality by having the puppeteers with the puppets, the characters often heckled the crowd if someone was talking or laughing loudly.

This acting troupe is unbelievably talented, breaking down the plots of Friday the 13th series, even bringing in characters from other 80s horror films, and showcasing Jason in such a way that at one point he danced with his sword to the tune of "Putting on the Ritz." Even Jason's mom's head had a special place in the performance.

This was the best time I've had at the theater in decades! The next one up in their series is in time for December - "Die Hard" with puppets!

Be sure to support amazingly talented, original, and hilarious theater. Check out All Puppet Players' Patreon page.