Make Your Own Horror Shorts 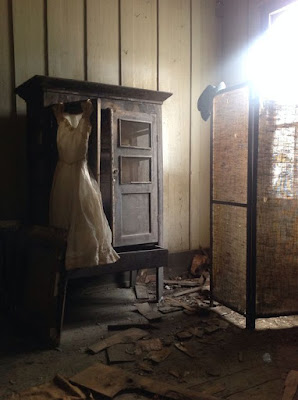 You're watching horror movies, enjoying the anticipation of approaching fall, longer shadows, shorter nights, and Halloween creeping closer. Why not try your own horror short film on your cell phone, just 30 seconds to one minute and 30 seconds. Nothing crazy. But something that artistically creeps you out.

I took some creepy soundtracks free online and utilized Windows Moviemaker program to combine the video I took with a creepy background. Sometimes, a simple sound like thunderstorm or bayou sounds, children chanting, or someone digging a grave can be put together with semi-lit creepy scenes.

If you want to act in an episode - here's an ad-lib I did. I knew I wanted a woman talking to her boyfriend on Facetime during a storm (utilizing storm background sounds and a towel with wet hair) And I set up a doll holding a knife with a light on it in the background. I was able to carry on a made up conversation with the boyfriend and then move just a bit until boyfriend supposedly sees the doll about to attack her. Simple premise. It was one take. Just got into the idea and went with it.

For the short below, my best friend put on a robe and I just made it up as I went along with a vague sense of what I wanted to happen.

Take your cell phone, go through your semi-dark house calling out to a possible intruder (make some knocking sounds) and walk past a motion activated nightlight and that will shed light on something. Simple idea.

Wear a hooded robe. Use candlelight. Think about sound effects. Show the view from bed at night of creepy shapes in the room. Use lightning effect even if it's just someone turning on and off a hallway light.