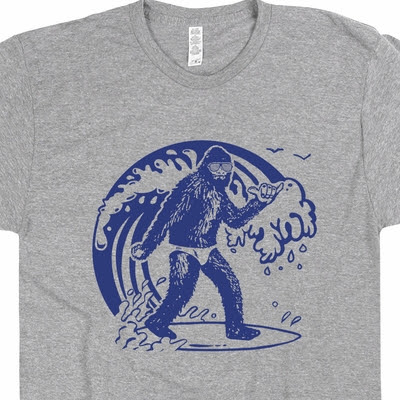 We often get caught up in Bigfoot in the Northwest or inhabiting forests of the United States and Canada, but the truth is, anywhere Native People have lived and do live, they can also exist. They are found in the cornfields of the Midwest, outside of cities, and even in the desert. And, as summertime at the beach comes to mind, we might even get a chance to glimpse one on the sand and in the surf. So, where does Bigfoot get seen along our oceans?

Most often, Bigfoot is reported on Washington, Vancouver, Oregon and Northern California beaches. But, don't let that fool you. They have been seen on Virginia Beaches, the Carolinas, and Northwestern Florida.

LINK:  A tourist vacationing near South Carolina’s Black Mountain range claims he saw something resembling Bigfoot last Thursday, and he managed to capture the entire “encounter” on video.Eric Walters told WBTV that he had rented a cabin off North Carolina Highway 9 last week and was enjoying a quiet stay in the woods with his wife and friends. At the time, his biggest concern was not mythical creatures, but bears.
“Our neighbors told us there was some bear activity and to be cautious,” he said. “So, when [I] walked the trails I’ve kept my Yorkie, Zippy very close.”
Many wildlife experts advise against bringing dogs on hikes in bear territory, as dogs may instinctively provoke the larger animal and in many cases, result in the bear turning its attention on its owner. Perhaps fortunately for Walters, he did not run into any bears, but he may have found a Sasquatch. During a walk near the cabin on Thursday morning, Waters recorded video of what appears to be a large, hairy, bipedal humanoid walking upright. Whatever it was, it seemed to be inspecting Waters from a distance until Ziggy began barking, at which point it fled. 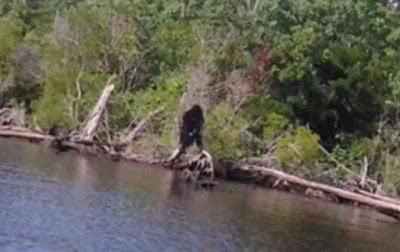 LINK to article about above Bigfoot on the shore.

My best friend Julie and I headed into Gloucester, Virginia to check out a murder-suicide abandoned house along a quiet inlet. We didn't expect there might be Bigfoot, but the focus of our study changed quickly -


Given a whole sea filled with yummies, it's not surprising that Bigfoot find their way onto beaches to take advantage of what ancients always have - the lure of fresh seafood. As well, the currents of the waters, the moonlight on the surface, the beckoning sounds and smells should draw anyone who appreciates nature.