Reverse Engineering An Alien Grey: Do They Come From Liquid Not Gas Environment?

An intellectual friend was debating with me recently about whether or not alien greys might be something evolved from a flying creature versus aquatic or land. He reasoned that birds have hollow bones and can breathe with unidirectional air flow and air sacs. He reasoned that might be the case with an alien grey.

This started me on a curious trek to reverse engineer these boogers.

Let's break them down a bit to see if we can figure some things out about their evolutionary process.

Mouth: The mouth is slit-like, lips not seen. No toothy mouth it would seem. So, diet might involve something liquid or perhaps something gel-like.  Or, even more chilling, something more like plants and photosynthesis - they don't need oral intake.

This would mean that wherever they come from, they are no likely carnivorous or even chewers as their jaws don't support it. They could live in a liquid gas environment perhaps or be aquatic.  Without lips, speech might be impossible or awkward.

Nose: The nose is almost nonexistent. We look at Neanderthal's nose and they did "turbo breathing" taking in twice as much O2 as Homo sapiens. They were built powerfully and for mountain climbing and hard work.

These fellows, we can assume were not built for exertion or heavy oxygen needs. They certainly don't show a barrel-shaped chest for exchange of oxygen and carbon dioxide. Even having nose slits would give a hint of a respiratory system, but perhaps the nostrils are a feature either genetically engineered from human DNA to be able to handle Earth's atmosphere or perhaps an exchange for liquid state that they live in, something like "gills" on fish. 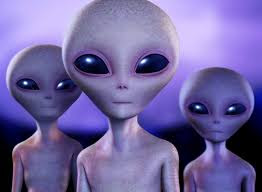 Eyes: The eyes are huge, black as if they are dilated with no apparent whites to them. They could work much like fly eyes with little cells within to get many views or the large surface might make it possible to see further, longer, and in the dark. No matter how you look at it, the large eyes can only mean one thing - the brain would need to be large. Much of Neanderthal's larger brain was set aside for handling eyes and body control as they had large eyes and were powerfully built.

These alien eyes were obviously key to their survival and that might mean they were from a dark environment or need to see 180 degrees without moving the eyes. 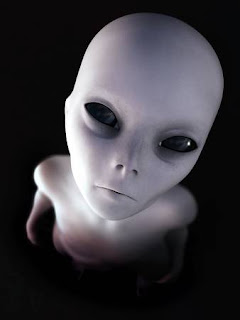 Head: The head is large and it seems out of proportion with the body, but if the function of the creature is to take in information and utilize the brain in overdrive for things such as "mind speak," then it makes sense. Neanderthals had larger brains and unusually large eyes and scientists came to realize that was for low-light living and therefore more of the brain was set aside to deal with the optic center. Imagine the optic center in a grey's brain! Do they see in the dark? Quite likely they do. Were they evolved for darkness? It would seem so. How often do people see aliens in the daylight? Where are their eyelids to protect them?

Interestingly with a wiry body and a big head, it would be awkward for land walking. These guys were super nerds, not workers. What we can gather from this is that their society doesn't count on the building of structures and roadways and heavy machinery and the like that we need on our planet. Their needs might be very basic to get enough nutrition to survive so they can concentrate on the intellectual pursuits. If they have advanced technology, likely a slave race built these or they can utilize a way of moving objects around and doing hard work without muscular effort.

Ears: I have yet to see ears on these fellows and that goes along with the small mouth finding. If a people were adapted to use their minds to communicate, the need to speak orally or to hear would be unnecessary.

We would have to assume that communicating by mouth and listening by ear are not necessary for the environment they were adapted to. This, once again, points to the possibility of an underwater/in liquid gas sort of situation. 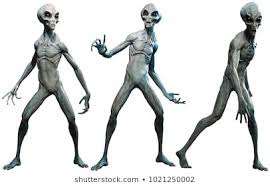 Body:  I have yet to hear someone speak of or even with my own encounters, see one breathing. If a respiratory system isn't necessary, then they are not oxygen breathers but somehow power their cells by other means. Having seem them leave in a red-orange kind of light that they seem to will to occur, I have to wonder if they release certain gases and create a chemical reaction that can make them come and go. This is hard for us to imagine, as we breathe oxygen and expel carbon dioxide. Their atmosphere, the substance they are adapted to could involve chemically-driven bodies versus our electrically driven ones.

The spindly arms and legs and narrow body, short height all show us that they may not have enough gravity to push them down, build their bones, cause resistance and muscle growth. They don't appear to be swimmers either.

My other conclusion at this point is that their body is basically a way to carry the head around, a kind of moving stand like what a tripod might be to a camera. If they are capable of creating a way to import and export themselves by will as I have witnessed, then even walking isn't necessary, although they are seen to walk by witnesses. It might be like swimming. We swim if we are in water. We must. If they are in our atmosphere, they may need to walk. 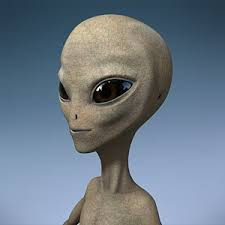 Imagine a being who is highly intellectual, able to mind speak, able to travel by unusual means and abduct humans on this planet for study. Now, imagine that they need to adapt themselves in another way to survive, such as living on land.

If our planet was suddenly covered in water, we might come to realize that our adaptation for land is now outdated. We must evolve for water and we must do it quickly.

As preposterous as alien greys are, there seems to be some logic to how they are built and perhaps even why they come here. Have conditions on their planet come to a place where they cannot evolve fast enough to adapt to the climate? There is no quicker way to adapt than to genetically modify.

And, why would they be particularly concerned for our feelings as they negotiate our chromosomes? We don't necessarily consider a sheep when we clone it.

And now it almost seems impossible not to believe in something that is so feasible....