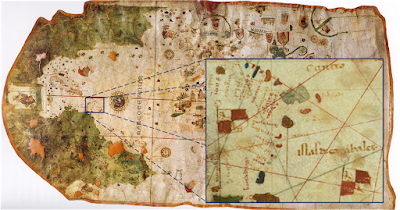 The ABC Islands (Aruba, Bonaire and Curacao) in the Caribbean were once referred to as the islands of giants.  When the Spanish arrived in 1500, they encountered the Caquetio people who were assumed to have migrated there by some kind of boat from Venezuela long ago and lived a very primitive life. They were also reported to be very tall with elongated heads.
Amerigo Vespucci, explorer, described them -


"Thirty-six men came and entered the house...and they were of such tall stature, that each one of them was taller kneeling than I am standing; in sum, they were of the stature of giants, the size and proportion of their bodies corresponding to their height..."

LINK: National Archaeological Anthropological Memory Management Museum of Curaçao in 1980, where a display of several skulls belonging to seven foot giants was observed and noted. In an attempt to track down these skulls, I contacted the curator of the museum who admitted that these skulls are no longer on display at the museum as they have been retrieved by the government, and cannot be located. 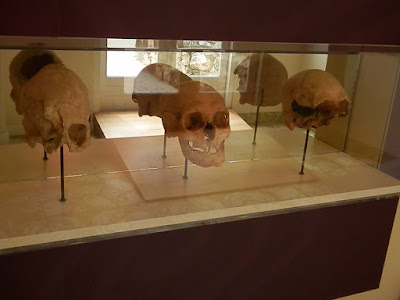 These skulls in the museum (above) show the ancients - note the skull on the left.

Where were these people originally from? Some believe Venezuela in about 2000 BC, taking boat on to these islands and settling. Very interesting theory.

The story recalls the find of the Canary Islands where the Spanish went in the Middle Ages and found a tall people with light hair who were unable to make boats or travel between their own islands. It seemed almost as if they were abandoned there. The Guanches people, however, had interesting pyramids that looked very Mesoamerican - perhaps another seafaring people deposited themselves in various locations. 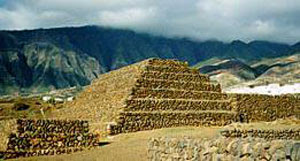 If so, then they kept some building knowledge, but lost their boating knowledge. Quite odd, hmm? What if these were the slave people of another culture that left eventually or died off, but not before they mated and gave the citizens rather tall height and red hair. 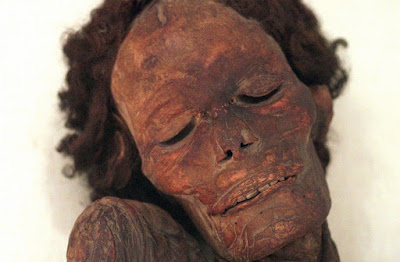 It's rather hard to evaluate if this Guanches mummy's skull looks like the skull of the people from the ABC Islands in the museum photo above, but it's easy to tell rather European features. Head does look equally pointed.

This is a subject I hope to delve into some more. I love a giant mystery!