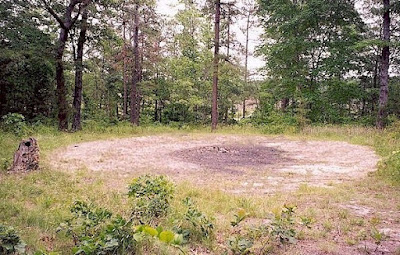 Like hitchhiking ghosts and crybaby bridges, devil's playgrounds are found in many locations. These are generally sites where something bad happened and bad luck continues there. Let's see about some of these infamous locations of dark urban legend -


At the turn of the 20th Century, a schoolhouse burned to the ground in Calgary. Since that Victorian Era time period, legends have abounded in Calgary of the children's' spirits haunting the area. It was said that the workers who tried to tear down the remains of the building became sick and their equipment broke down. (SOURCE LINK)

In Arizona, there is a park called "Demon's Playground" by locals. Shadow figures are said to torment folks who visit after dark. And, that's not the only place in Arizona, such dark figures are seen at the mountain at Casa Grande and at a community called Anthem. (SOURCE LINK)

A cemetery in Lawrence, Kansas is said to be the Devil's Playground. The Old Stull Cemetery has had a wide variety of reports from werewolves to unexplained fires and bizarre sounds. Of course, to the locals' dismay, it has gotten a reputation that brings too many people skulking around to see. Some say demonic worship occurred there, that the devil appears there upon occasion, and the stories get bigger and bigger as they are passed along. (SOURCE LINK)

In Bear Creek, North Carolina, there is an area in the woods where nothing grows in a circular shape. Locals call it the Devil's Tramping Ground. Some have witnessed red glowing eyes in the circle and one skeptical reporter spent the night in a tent in the circle only to have footsteps circling it all night.   (SOURCE LINK)

Oklahoma City, Oklahoma has a legend of a devil's playground. According to the urban legend, a man entered a playground and killed the children. The local church destroyed the bridge to the playground and it was shut down. Eventually, the equipment was moved, and it is said the children haunt the area. Of course, like most legends, it's hard to get details on whether any of these events occurred. (SOURCE LINK)

Devil's playgrounds are some of the most reported para sites around the world, as when unexplained and sometimes tragic things happen in a location, one has to wonder if it's cursed or possessed.