Is the Piri Reis Map Genuine? 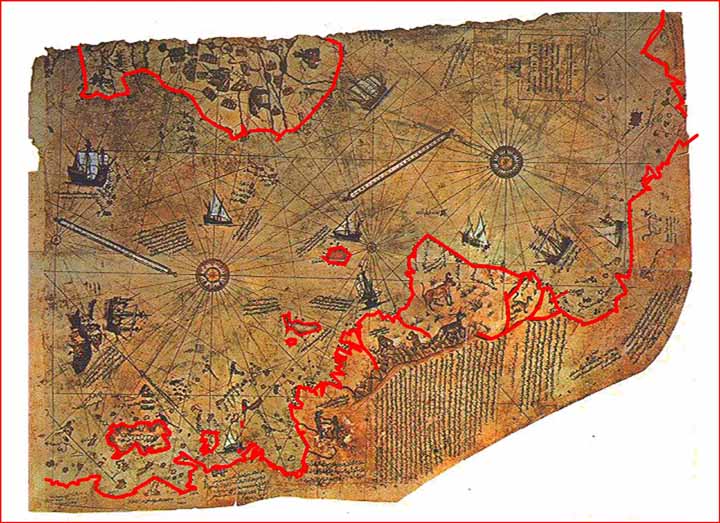 The Piri Reis Map was compiled in 1513 as a map of the world, backed by an Ottomon (Turkish) admiral and cartographer (map maker), Piri Reis.

Only one third of the map survives.  What is left shows the western coast of Europe, North Africa, and the coast of Brazil with great accuracy.

The construction of the map incorporated many other world explorers and their maps from Indians to Columbus, Arabian and Portuguese.  It was placed upon gazelle hide.

The map was discovered by a German theologian in 1929, sent to go through maps in the Turkish collection. It is believed that there were other maps more accurate in relationships and contours during the 16th Century.

This is considered to be the oldest existing map showing America.

Source:  Apart from its great historic interest, the map has been alleged to contain details no European could have known in the 1500's, and therefore proves the existence of ancient technological civilizations, visits by extraterrestrials, or both.

It is believed this map was torn along the eastern edge and so we are only seeing half of an entire world map.

There are many discrepancies involving the America portion of the map. The marginal notes refer to some of the islands and coasts north of South America as "Antilia," clearly referring to the Antilles. The lack of good detail is puzzling since there must have been much better maps of the Caribbean by this time. If it's a real place at all - "Antilia" was a legendary island of the times.

Perhaps the biggest controversy about the map is what many interpret to be Antarctica without ice.

Source:  Thereafter, the Piri Reis Map drifts into the Twilight Zone. It shows South America swinging far to the east. Given that the map so far has done fairly well in latitude, we can be sure the coastline is not Antarctica. Also, if the map draws on ancient knowledge to show things no 16th century explorer would have known, why is the coastline continuous? So why isn't there open water between South America and "Antarctica?" You can't seize on an accidental resemblance to a couple of bumps on the coast of Antarctica and blithely ignore the failure to show the Drake Passage!

Most damning of all to the Antarctica interpretation is that the marginal notes refer to the coast in this region being discovered by Portuguese ships blown off course. One note refers to the land being "very hot," which probably rules out Antarctica. The Piri Reis Map itself explicitly says the information in this area came from European sources. Atlanteans and extraterrestrials need not apply. We have isolated sightings of coast made by ships far off course and unsure of their location. Small wonder the map is wildly inaccurate.

Source:  On 6th July 1960 the U. S. Air Force responded to Prof. Charles H. Hapgood of Keene College, specifically to his request for an evaluation of the ancient Piri Reis Map:

TO: Prof Charles H. Hapgood, Keene College
Dear Professor Hapgood,
Your request of evaluation of certain unusual features of the Piri Reis Antarctica map of 1513 by this organization has been reviewed.. The claim that the lower part of the map portrays the Princess Martha Coast of Queen Maud Land, Antarctic, and the Palmer Peninsular, is reasonable. We find that this is the most logical and in all probability the correct interpretation of the map. The geographical detail shown in the lower part of the map agrees very remarkably with the results of the seismic profile made across the top of the ice-cap by the Swedish-British Antarctic Expedition of 1949.This indicates the coastline had been mapped before it was covered by the ice-cap. This part of Antarctica ice free. The ice-cap in this region is now about a mile thick. We have no idea how the data on this map can be reconciled with the supposed state of geographical knowledge in 1513.


Of course, this far from the drawing of the map and those involved, all we have is conjecture. If Piri Reis depended on lots of seafaring countries to give him input and come up with a consensus, then it would seem that they did a fair job on most of the recognizable landmarks, though North America seems to be a real puzzle. It would be interesting to see if anyone can uncover in some archives at some museum, the other half of this map.

It astonishes me that any museum could be so poorly cataloged and, yet, look what the Smithsonian did with the mounds finds and ancient giant race!