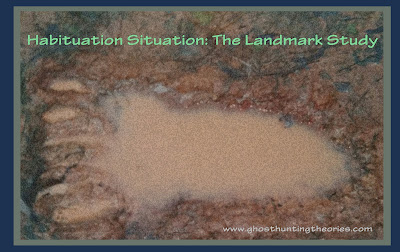 This is the first in a long series for Ghost Hunting Theories regarding a landmark Bigfoot habituation study from the early 2000s in the South. Field notes, photos, and video are being shared here to archive what was, I believe, one of the most intuitive studies of a location that had a Bigfoot clan living alongside the residents in a rural area.

The property owners had noticed signs of Bigfoot habitation there and they referred to some friends about the activity. The friends began to visit on weekends here and there, noting the signs of tree breaks, footprints and other. They hadn't officially begun to document officially, but were more caught up in verifying that the activity continued.

The property owner was not the only one with a Bigfoot "highway" through their lands. 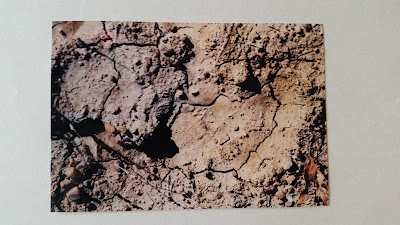 The photo above was a print found on a dirt trail found at the end of the property's roadway where there was a wildlife management area. 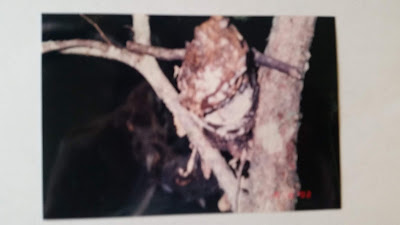 This fat limb was broken off, propped in the vee of a tree with another stick across the top of it locking it in place. This was on the property near an area that was set aside as the Tall Ones area. 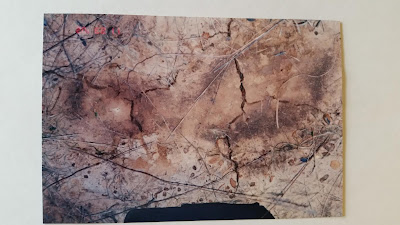 another print on the dirt trail

This print above was on the dirt trail also. 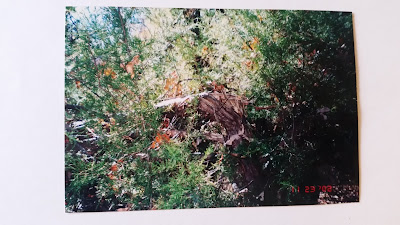 It was noted by the group that cedar tree breaks were a favorite marker by the Bigfoots. 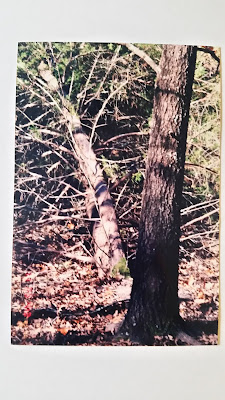 In the photos above and below, cedar push-overs. 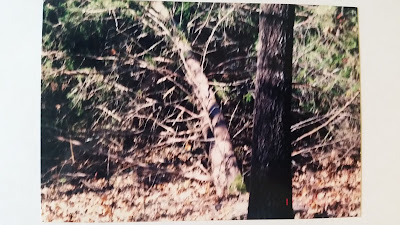 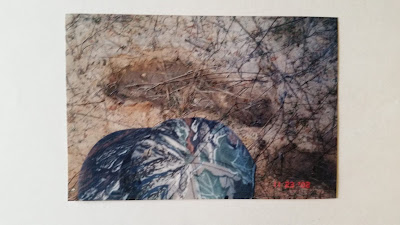 It dawned on the group to put something in the photo for size reference, thus a baseball cap was set down. (Typical length of a baseball cap is about 10-1/2") 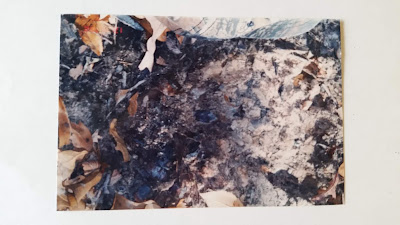 print near the fence line

The trail behind house that goes into woods to creek had a huge berry tree. The owner built a tree house there. Had 2x4 wood that was cut into steps to make tree ladder.

This researcher (we shall henceforth call him "Dusty") stayed in the tree house by himself all night.

The tree house had an open porch-like area where he could observe outside. A fence line ran past the garden and came out close to the road.

When it quieted down, Dusty went to sleep. When he got up the next morning, he found that print above near the fence line near the duck pond. About where the running had stopped.

The best he could surmise, this was a possible juvenile. 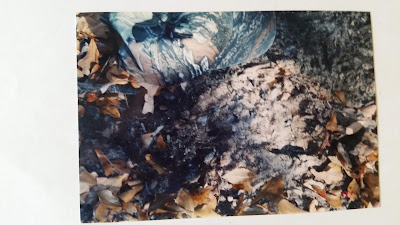 placed his cap there to show perspective 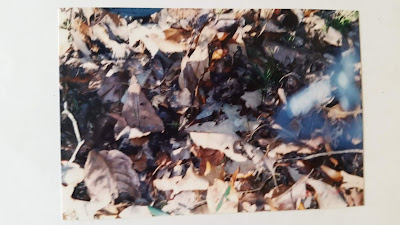 Behind a tree along the fence line, a print 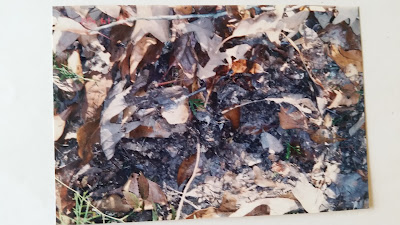 This print pushed the leaves down 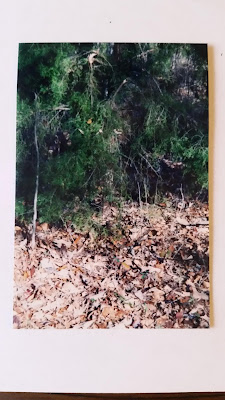 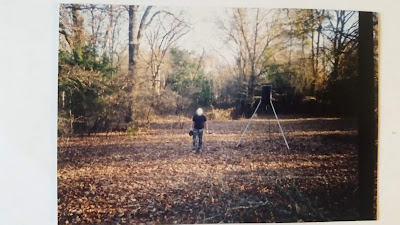 On the property an area was set aside for the Bigfoot. There was a shed on the north side of property and duck pond and fence line that divided the property with a gate to the woods area where the Tall Ones duck pond/garden area and open gate to woods further north which is area the BF travel through.

The photo above of the deer feeder, it was set up in the clearing in the Bigfoot land area. Shot taken from game cam. 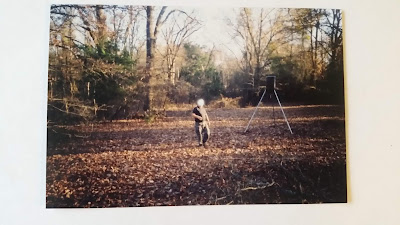 another shot of deer feeder in Bigfoot clearing 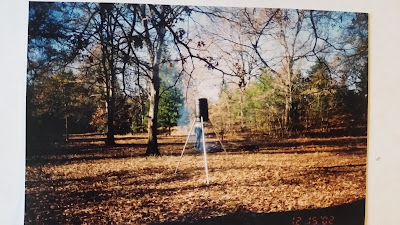 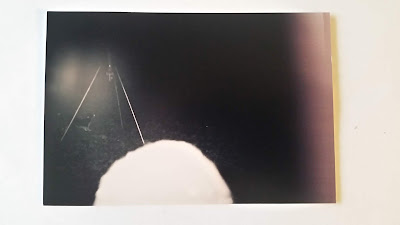 This game cam shot on the Bigfoot land was unusual. Something got in front of the camera. If you've ever put your hand near a camera, you know how it comes out kind of pinkish like the fuzzy light to the right in the photo. Note that the property owners' dog is under the deer feeder.

**in this blog's author's opinion, we are seeing a finger along the right side of the photo, likely a right ring finger and the tip of a pinkie. Someone likely put their hand in front of the lens. Take note too of the haze around the deer feeder compared to the next pic** 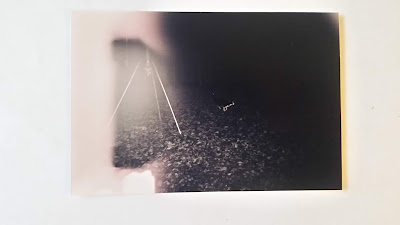 another unusual capture on the game cam

Another game camera capture here where the property owners' dog is taking off. What is happening on the left edge? Looks almost like flesh again and the upper right corner a hint of the flesh tone too. Then, a strange dark shadow being cast over the scene in the upper right and bottom. Notice the weird haze around the deer feeder again.... 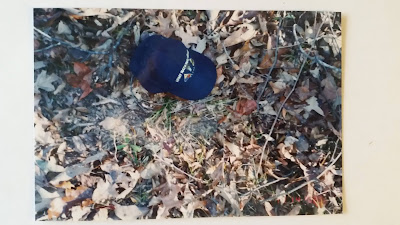 This large print was found on the property

A large print was found. 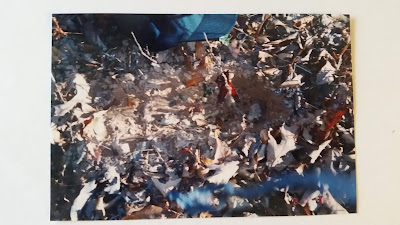 These photos show more prints found near the creek on the property. 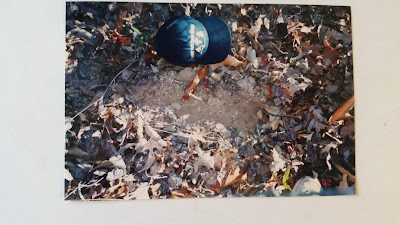 another print in creek area 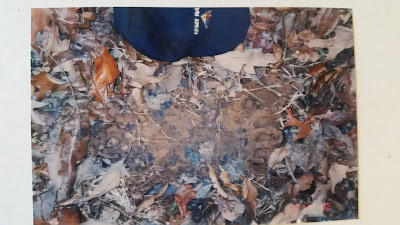 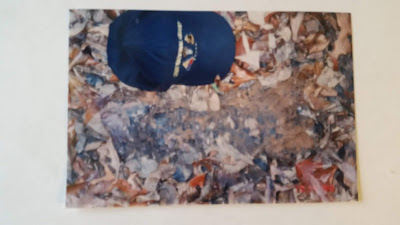 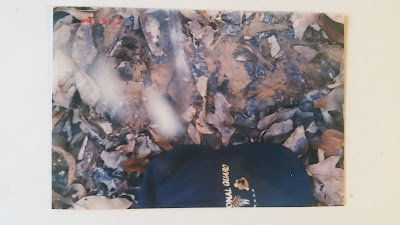 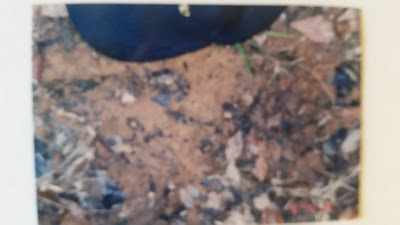 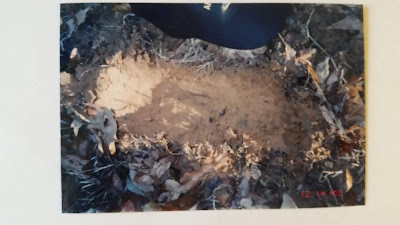 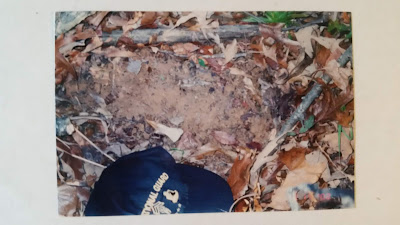 It is our hope that by sharing and also archiving this information, the public and other researchers can see what a habituation site is like, as well as inventive ways of approaching the subject to gather the back-and-forth interactions that habituation sites offer.

Another installment comes next Monday and each week, it gets more and more intense with the insights and interactions.