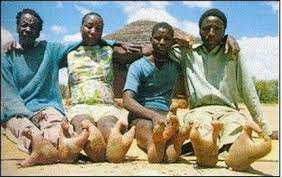 The Vadoma people, also known as the Bantwana tribe, which means children/descendants, are a tribe living in the north of Zimbabwe, primarily in the Urungwe and Sipolilo districts on the Zambezi river valley.


There are many in their community, who can’t wear shoes due to the shape of their feet. They only have two big toes on each foot.

They don’t have middle toes and the two outer ones are turned in. They still can walk but with some difficulty according to the shape, running is also difficult to them. It is said this condition helps them while climbing trees, though.

Some refer to them as the Ostrich People.

The reason is there is a small genetic pool because tribal law forbids marriage outside of the group, thereby continuing the condition in the gene pool.

It may seem exceptional that they would want to inbreed and propogate these issues but much of the world has populations that openly practice consanguinity (inbreeding).

It seems a shame that these people will suffer because they are not allowed to extend their genetic breeding pool, but then if any of these tribal members were to breed outside of their colony, they would be introducing the gene for ectrodactyly.