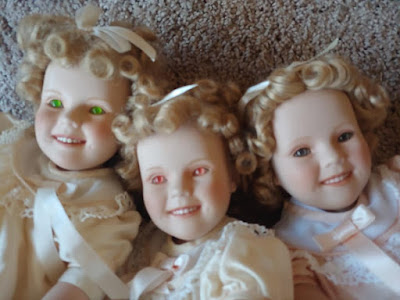 First, there was Haunted Shirley with her red eyes, then Green Eyes and now Brown Eyes. These Shirley Temple dolls have some issues surrounding them besides having color-changing eyes.

I decided to sit down and give each doll a proper read as a psychometrist (one who psychically reads objects and those who have handled them previously).

There are obstacles to being a psychic that can be our utter downfalls:
1.  Ego
2.  Interpretation
3.  Intellect

We see the ego issue most often with psychics. It is human nature to want to make someone happy and if a subject we are reading gets excited about what we are divulging, we want to keep that feeling going. But, it can be like a joke that goes too far. You say something funny and folks laugh, but if you keep trying to squeeze more out of the joke, it fall flat. If we try to keep pursuing the "oh wow" reaction, we can go too far to the point of bypassing the mark. This is why when I do read someone (rare thing), I do not want to look at them or hear them speak or make sounds. They need to be quiet and let me spill all I can without their reactions or I might end up down a dead end.

Interpretation is a really common issue in that information comes to us sometimes symbolically, a word, a color, even something goofy like a clown image. What does a clown mean? Well to each psychic that could be anything from fun-loving and happy to literally a clown, such as the subject is a clown on the weekends for birthday parties. So, how do we know how to interpret the bits we get? time and experience. I often suggest online testing. I go to www.gotpsi.org to test often to recall the feeling of synchronicity when I pick a right item. That feeling helps us to know when we have made a psychic hit.

Lastly, intellect is a real bitch. We want to be right, so sometimes we ignore what the intuitive thinks for what we see visually. One time, I read a watch from a friend I knew to be very well off and focused on appearances. It was a fine watch, real quality. But, what I read was a trailer park and hiding from someone knocking at the door. Ego and intellect would have told me, "don't tell her that, it can't be right!" But I went ahead and followed intuitive. As it turns out, she never told me her childhood which involved living in a trailer park and hiding in the dark when bill collectors knocked.

Now, on to performing psychometry on the dolls. Let's begin with the newest arrival, "Brown Eyes." 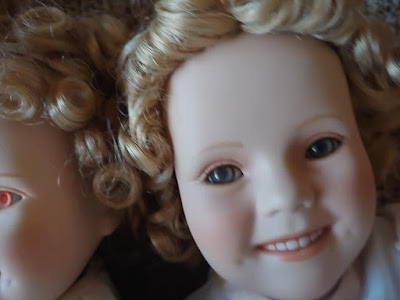 Brown Eyes arrived just recently. Like the other Shirley Temple dolls, her eyes were originally green. They look almost gray blue here, but in the sunlight, they are very warm brown.

Other than her previous owner reporting some bad luck and pet illness since having the doll, there was no real sense of urgency or terror.

She is a serene spacious energy. She is a picture window looking out over distant snow-capped mountains. The feeling of Reader's Digest magazines and catalogs stacked up in a living room. She is an energy that does not like living beings around her, such as pets and humans. She is contemplative, isolated, almost monk-like. Living beings, even plants, seem to activate a protective mechanism in her. She wants silence and space, time and eternity. Her energy is not one that reacts well to comings and goings, changing energies in her presence. I would suspect that every time a living person interacts with her personal space and quiet, she uses some of that ancient energy to put a burr under their saddle, so to speak, an irritating spike of energy that could lead to accident or illness if the person or pet is particularly sensitive. I also do not think houseplants would do well in her space. 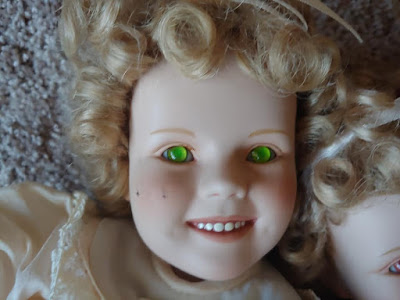 Green Eyes has a very different energy. Hers is dynamic and parenting - like a single parent, both male and female energies. She is a bit like an Italian mama, wants to be the heart of the home and everyone in it. There are two girls in particular that I picture her with, and she almost wishes to be human quite desperately, to chase with them, to be in the middle of the fray. She studies, dreams, wishes to be a part of everything and also to control it a bit. This desire to control those around her and be like them reminds me of that girl in high school who envies you so much, she dyes her hair red like you, uses your phrases when speaking, and starts to dress like you. She wants to BE. Once there is a bond with this doll, it would be impossible for time or space to truly break it. She is not evil, but she is manipulative and controlling in a passive aggressive manner (the worst kind because you don't realize it's happening). I would suggest someone be cautious bringing her into their inner circle, trusting, and connecting emotionally with her.  She may stalk them forever. 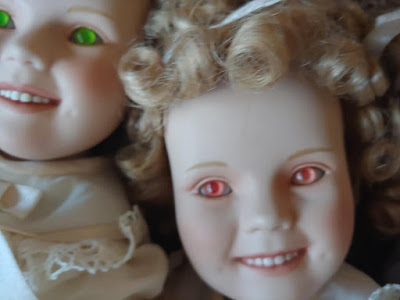 Haunted Shirley. When she first arrived, I could get nothing about her by touching her. She was utterly devoid and sterile. Having had her around me for some time I learned something amazing about this doll upon this psychic read that changes how I see PK (psychokinesis) energy. She has the bright enthralling light of the Divine in her and she has the dark dense cold energy of the Dark. They are two forces that butt up against each other like continental plates push and create earthquakes. The force of the two good and bad forces within she keeps under good control but occasionally one makes a move and that causes a shift in the unbelievably powerful forces within and that shift is what is causing object movement around her. The question now becomes, how does one nudge the good or the bad to show what she is capable of? I believe when she came into my hands and I showed complete compassion, the Good force shifted and got an upper hand, causing a new battle between the two and lots of object movement. I will utilize this knowledge in some PK experiments with her. I can see now that my very emotional energy, if it's positive or negative, could upset the balance of the forces in here and cause PK activity. Ultimately, I hope to help the Divine to win this constant headlock.

This an interesting dilemma. I have one doll who wants to be left alone, away from the living to enjoy peace and serenity, another that wants to be in the fray controlling the activity of the living, and another who contains within her two of the most ancient powerful forces in the universe that are locked head to head, butting up against each other and creating PK seismic activity.

How I go about studying these dolls with my team, Arizona Paranormal Research, has yet to be determined but with these insights experiments can be designed.